One of the most important features of any motherboard is overclocking ability, and this is where the P35C-DS3R falls a little short. After a long overclocking session, I found 450FSB to be the highest the board would possibly go before becoming unstable. Compare this to the P5K boards that hit 475FSB, and even that is not high by todays standards.

What’s interesting though, is that pumping more voltage into the FSB didn’t seem to greatly help the overclock. Both the SB and NB have voltage options of +0.1v – +0.3v, and 450FSB was stable with only +0.2v. So what good is the +0.3v? There’s no good at all in it, it seems. 455FSB delivered errors at both +0.2v and +0.3v, but 450FSB was completely stable at +0.2v. Therefore, +0.3v will likely never have to be touched, unless you receive a board that wants to overclock a bit further.

While the board won’t be for hardcore overclockers, it still offers lots of OC’ing room for those who want high CPU frequencies without the benefit of a major FSB overclock. In truth, 450FSB may have been the limit thanks to our fanless NB/SB, but I didn’t proceed with extensive testing to see if that was the case. Most people won’t want to ghetto-mod fans inside their case to keep these two cool. The fact is handled 450FSB with modest heatsinks is good.

Besides overclocking ability, there isn’t too much to complain about. The lack of a second PCI-E 16x slot wipes out Crossfire capabilities, so if you are interested in that route, this board is a non-option. During installation, I didn’t run into any clearance problems at all. Even the 8800GTX installed just fine, without anything blocking it’s way.

Despite the wider DIMM lanes, you will still be able to use your RAM fan, because regardless of whether you are using DDR2 or DDR3, your fan will cover all the modules just fine thanks to how they are laid out. The combo DDR2/DDR3 feature is one I don’t quite understand, but if you have a specific need for a board like this, then so be it. Personally, I don’t find there to be a large difference between DDR2 and DDR3, as was backed up with our tests. At much higher overclocked frequencies, we will begin to see differences, but are they needed? That’s the question. There will be a point where beneficial returns are nil. 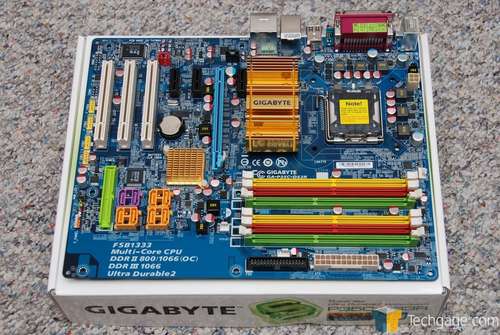 This board currently retails for ~$175, which to me is a reasonable price, if you plan on using the boards features to their full potential. This would include the E-SATA port, which will be appreciated by those who require it. It’s a little different than most E-SATA ports, since they include a cable for power. If you have an E-SATA enclosure, you won’t need the power cable, but if you have a spare S-ATA drive lying around, you will be able to hook it up to your PC without opening your tower.

Although Gigabyte’s color-schemes are sometimes questioned, one thing that excels is their packaging and presentation. It’s clean, professional, and informative. It’s easily some of the best looking packaging I’ve seen from any motherboard manufacturer. They include all the cables you will need, and a fully detailed installation sheet for new computer builders. Although the board itself isn’t exploding with features, the overall package feels like a good value.

When all said and done, I am going to rate the P35C-DS3R an 8 out of 10 on the Techgage scale. With what we’ve been delivered, I feel the board is about $20 more expensive than it should be, but I believe that’s because of the combo RAM functionality, but functionality I can’t see many people using. Even still, for the price, this is a stable board for regular consumers and enthusiasts alike. It doesn’t offer explosive overclocking ability, but even at 450FSB, the board appeared completely stable. The ASUS P5K boards performed better in almost all of the tests, but they cost upwards of $60 more, but also include WiFi and slightly better overclocking ability. With those facts in mind, the ultimate decision is yours.