Interview with Andy Keane of AGEIA

AGEIA is a company with huge ideas. They plan to make our gaming experiences much more immersive with their PhysX add-in card. We sit down and chat with Andy Keane to answer some burning questions.

Back in May, around E3 time, AGEIA was responsible for a lot of buzz in the hardware industry. The world was talking about their promise to make our gaming experiences much more rich. This would come in the form of a Physics Processing Unit (PPU), called PhysX. For those who have not heard of AGEIA or PhysX before, I’ll delve a little into what you can expect to see more of in the future.

Basically, AGEIA (Stands for America, Germany, Egypt, India, America) created a PhysX PPU chip, which resides on a PCB board, which will be used in your PCI slot. The PhysX chip utilizes the NovodeX SDK. What the chip can do essentially, is handle mass amounts of physics operations.. much more than a normal CPU can. In fact, according to AGEIA, a current CPU can handle around 1,000 active bodies, while the PhysX chip can handle 32,000 with relative ease. With future software updates, that number could get even higher. 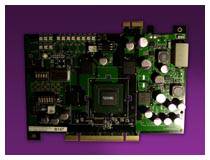 There are a lot of skeptics out there though, and I for one, am one of them. What AGEIA promises to do, is quite extraordinary, and if they get the right support, which seems great so far, then this could be an add-in card that hardcore gamers cannot do without.

In gist, the PhysX card will allow for a much more rich gaming experience, due to the much larger physics capabilities. Hopefully down the road, more and more developers will pick up on this and make use of the NovodeX SDK. Currently, such companies as Shiny, Ritual, Cryptic, NC Soft and Epic have jumped on the bandwagon and plan to use the PhysX technology in their games. Even announced recently, the Sony Playstation 3 will be taking advantage of the NovodeX SDK as well.

What we know about the card specifications up to now is, that it will have 125,000,000 transistors, and a 182mm^2 die size. It uses a respectable 0.13ÃÂµ process, and uses approx. 28 watts of power. Lastly, it will be equipped with 128MB or GDDR3 memory. In the picture to the right, you can see the overview of the card. You’ll notice that it’s dual sided for PCI-E and PCI. This will not be in the final card, but is only available in the developers version.

With all the information about the PhysX chip already, there were still some burning questions. We had the opportunity to chat with VP of Marketing, Andy Keane, to clear up these questions. I should also note, that all the images you see in the article can be clicked on for their original size.

Techgage: Greater physics capability sounds exciting, but since most gamers will likely be swayed away from the $249 – $299 price tag, do you have any specific plans to help really grab their attention, and gain an interest to buy?

Andy Keane: Content is king, and what will sell the hardware is the games. We’ve lined up a great deal of content, see enclosed presentation. Also, keep in mind, that consumer prices for graphics cards, and SLI are upwards of $400.

Techgage: Adding to the previous question. Has there been given much thought about a potential bundle to be included with the card upon launch? If not games, but even interactive demos that utilize NovodeX?

Andy Keane: Yes, there will be interactive demos and possibly bundles. Those are to be determined, and ultimately it will be up to the board provider.

Techgage: Has anything specific to the card changed spec wise, since we have last heard? Does the 125 Million Transistor count, 0.13m process, with 128MB GDDR3 memory, still hold true?

Andy Keane: The card will be PCI at launch. PCI express may be available in the future. The reason we chose PCI at this time is that the extra bandwidth is not needed immediately PCI express is still a young technology with some compatibility issues.

Techgage: You have already announced a few games that will support PhysX, including City of Villains, Unreal 3 and Rise of Nations: Rise of Legends. Is it possible, and do you see it likely that some developers will add the support of NovodeX in current games, such as Valve with Half-Life 2 and id with Doom III?

Andy Keane: We are continuing to add partners on a regular basis. None of those specific titles have made any public commitments at this time. However, with the recent announcement of Sony using the AGEIA PhysX SDK standard on Playstation3, the development community will be exposed to the technology on a wide scale.

Techgage: It’s well known that game modifications are a huge thing. We have seen countless Half-Life and Unreal Tournament total conversions and modifications in the past. Will modders be able to take advantage of NovodeX? Or will it be the developers choice to include the functions in their level editors?

Andy Keane: Yes, modders will be able to take advantage of the AGEIA PhysX SDK (also known as NovodeX).

Techgage: Due to current limitations of even the highest end CPU’s, they cannot handle the extreme physics in the demos you’ve showcased. With the introduction of Dual Core CPU’s, is there now less of a need for PPU?

Andy Keane: No. In fact, there is a great benefit to pairing Dual Core CPUs with a PhysX processor. Even if you use the full bandwidth of the Dual Core processors, games can only display about 1,000 rigid bodies. The PhysX processor will handle up to 32,000.

Techgage: As most gamers know, after buying a top end video card, we see a better one come on the market very quickly. Do you expect the PhysX card to head in the same direction, with regular revisions and upgrades just like the GPUs? Or will most of the updates/upgrades be via the drivers?

Andy Keane: Revisions to the PhysX processor will come by adding new features such as Soft Body Simulation, Hair, Finite Element Analysis, etc. Therefore, those changes will make their way into the PhysX processor at a reasonable pace, and will require implementation into games over time.

Techgage: Some people do their best to keep their computers quiet and cool. From an available picture of the card, we see that it includes a copper heatsink and fan. Are you able to tell us what the fan is rated at (CFM, RPM), and how hot the PPU can potentially get at load?

Andy Keane: The total power consumption for the board is around 28 watts. The fans and cooling will be appropriate to that, and therefore we don’t expect power and cooling to cause any related issues.

Techgage: Many people out there may be wondering why the PhysX is being developed as an add-in card, and not built straight into the graphics card. Is there a reason for this.. lack of initial support from ATI and NVIDIA? Or is this something you are considering for the future?

Andy Keane: An integrated graphics/physics card could be possible in the future. The first round of product will be available as a stand alone card. The PhysX architecture is very flexible and is applicable for motherboards and more.

Techgage: Lastly, we already know that the card is set to launch late in the year. Can you tell us when we can expect to hear more announcements about the card before then?

Andy Keane: We will be at the Siggraph tradeshow at the beginning of August. We will have more news then, and we will continue to make announcements as they are relevant.

I’d thank to thank Andy for taking the time to answer our questions! As skeptical as I am about such a ‘revolution’, I have to admit that I am really looking forward to this card. Albeit expensive, it may become the killer add-in ‘toy’. AGEIA certainly has a lot to live up to, but when we see some companies as Epic and Sony jumping in on the PhysX bandwagon, it’s hard to think that this will not take off. If they put that kind of trust into this technology, it definitely shows a great future.

If you are interested in seeing some actual demos of the capabilities of the PhysX, you can download these following demos. The first is an AVI and requires the DivX codec. The others are Bink Video and can run straight from the executable.

We hope to see the PhysX card hit it’s holiday release date. We will continue to post news about the card as it’s released, and will have an in-depth review once the cards released.

If you wish to speak your mind about this interview, please feel free to post in our related forum thread. Registration is not required, but welcomed. Specific comments that you wish to be directed in private, you can e-mail them to rob [dot] williams [at] techgage [dot] com.