After months of anticipation, the PC version of Destiny 2 is soon to drop. That being the case, there may be things you’d like to know about before jumping in, whether you’re entirely new to the Destiny universe, or are transitioning from the original on console. Fortunately, some of those things can be found right here!

Whether you’re a returning Guardian about to jump from Destiny straight to the PC, or you’re going to be discovering the Destiny universe for the first time ever on PC, there are some things you may like to know upfront that will help you grasp certain mechanics of the game easier in the earlier hours of the game.

This post is going to be packed with minor spoilers (no story), so if you want to continue avoiding information at all costs, you can close this tab, and I wouldn’t blame you at all. Having played Destiny 2 on PlayStation 4 enough to earn the Platinum trophy, I’m still excited to dive into the PC version, and I appreciate knowing certain things now that I didn’t around the original launch of the game.

Don’t take this list as gospel; it’s just a personal look at ten things I either wish I knew from the start, or think new players (returning from the original, or not) should be aware of. If you don’t feel like reading some 3,000 words, I’d recommend scrolling and just reading the subheadings that grab you. You don’t need to know everything on day one, after all.

Despite what some might say, Destiny isn’t an MMO, and it doesn’t try to be one. It’s an “online game” that just happens to have some mechanics that make it a little more complex than say, Unreal Tournament. That lack of complexity means that you can easily play the game on three different characters, which would let you experience the game as a Warlock, Hunter, and Titan. You don’t have to play more than one character by any stretch, but the game makes it easy enough to do so, so if you end up enjoying the game to a significant enough degree, you’ll more than likely be playing all of the classes, eventually.

That of course means that the class you choose from the get-go won’t matter too much, because you’ll be experiencing them all at some point. But if you’re already sold on the idea of sticking with just one character, which should you go with? Here’s some basic explanations:

Hunter: Quick and nimble. Supers include Golden Gun (one-shot kill in PvP… usually), and a void tether that lets you hold enemies in-place for a certain amount of time. The downside to being quick and nimble means that Hunters are kind of like a “Glass Cannon”, in that they are pretty squishy. Players choosing to roam the Destiny 2 world as a Hunter should be prepared to handle accelerated death.

Titan: If Destiny had a “Tank” class, Titan would be it. Supers include a shield barrier that keeps those hiding behind it safe (for a time), and a satisfying slam that lets you kill many regular enemy mobs at once. For PvP, you can throw flaming hammers at people, nailing an opponent’s coffin shut. Unlike the quick Hunter, Titans are a bit slower, but that comes with the trade of improved survivability.

Warlock: Warlock falls somewhere in between Hunter and Titan, in that it’s not quick, or slow. It’s the more ‘magical’ of the three classes, as the name might suggest, allowing you to create a healing puddle on the floor, or hurl a debilitating Void bomb at your enemy, or enemies. In either PvE or PvP, your Stormtrance super can make for some pretty easy kills.

Some might disagree, but there’s a lot of value to be had in any class you choose. And, as mentioned, you may very well create all three characters at some point anyway, so just choose your first based on what sounds the most tempting.

You’re going to be earning a lot of gear before you know it, but you truly don’t have to worry about your full loadout until you reach the level cap of 20, which should happen after about 10 hours of gameplay. At level 20, you can begin earning Legendary Engrams and items, and after a few hours, you’ll probably have a Legendary item in each slot. 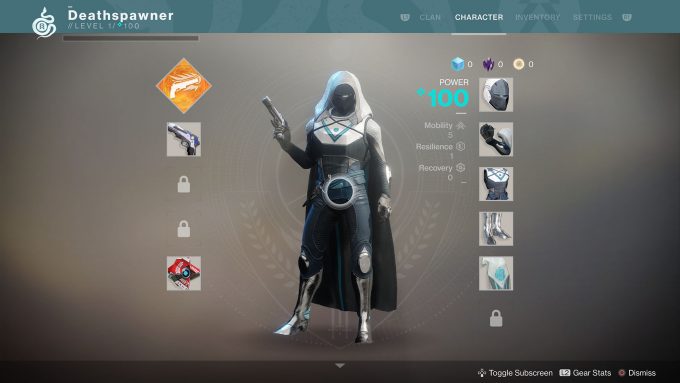 Instead of worrying about what you look like, what you should be concerned over is how high your Power Level (Light Level in the original) can get. If you’re wearing a Power Level 112 Helmet and find a 118 one next, equip it! With armor, it truly doesn’t matter what you wear, because it’s the Power Level that matters. While gear does include different stats and capabilities, they can largely be ignored for the most part – until you begin refining your character because you’ve hit a high Power Level.

A note about weapons, though. If you find yourself with a 120 Hand Cannon that you’re worse off using over another weapon, say, a 110 Auto Rifle, put the Hand Cannon back in the bag – but don’t delete it. At any given point, you should never delete the highest Power Level item you have, even if you are not equipping it. As long as it sits there, the game will use it in its calculation to give you the highest-level loot possible.

Gear matters a lot in Destiny 2, but really only after you are well leveled. It also implies you understand infusion, which I’m going to cover next.

Infusion Works Only With Similar Pieces Of Gear

In Destiny 2, your three available characters are far more independent. If you want to improve the Power Level of your Warlock helmet, for example, you’ll need another Warlock helmet of higher Power Level to infuse it. The same applies to weapons: shotguns can only infuse into shotguns, grenade launchers into grenade launchers, and so on. It’s important to note that if you have a Grenade Launcher in your Power slot, you can infuse it into a Grenade Launcher in the Energy slot. Not all slots share the same weapon types, but there are many redundancies.

In the original game, PvP modes Iron Banner and Trials scaled player abilities based on their Light Level, but that’s been completely changed in this sequel. A good or bad change, depending on your perspective.

It is important to note that like your gear in general, you shouldn’t worry about infusion until level 20. That’s because infusion requires a Legendary or Exotic base, and also requires Legendary Shards, which you’re not going to be earning until you start dismantling Legendary items. And to do that, you need Legendary items, which don’t start dropping until you’re level 20. It’s a catch 22. Err… 20.

Each Planet Has Its Own Currency

As you’ll be exploring the likes of Earth (ooh, exotic!) and Titan, deeds done will earn you specific currency that can only be used on that given planet. EDZ tokens will be supplied for Earth, where you hand them over to an NPC that can grant you some quality gear – and gear of a specific set. It requires 20 tokens to earn one Legendary Engram, and anything you do on a planet will reward them: finding chests, or completing Public Events, Adventures, or Lost Sectors.

AMD Radeon RX Vega 64 - Card Box Packaging
Before claiming an Engram, you can peer inside to see what's available

As you travel around, you’ll probably notice some out-of-place plants or objects that can be picked up (they will glow if someone else in the area picks one up, but loot is not shared). These items will grant an itty bitty amount of reputation with the vendor on that given planet. I’d wager these “plants and things” could be picked up only if you pass by it, but I wouldn’t recommend going out of your way to pick one up if you see it in the distance.

It’s worth noting that when you rank up anywhere, and are given the opportunity to collect a Legendary Engram, you can hover over that Engram before choosing to accept it, and then hit a key to preview what’s inside. This will give you a good taste of what you can get from it, and help you decide whether or not your time would be well spent trying to earn tokens on that particular planet.

Join A Clan – You Won’t Regret It

Clans in Destiny meant nothing more than having a dedicated friends list of people you regularly play with. In the sequel, each clan member will contribute XP towards leveling up the clan (to enable certain gameplay boosts), and, if you end up doing activities with other members in your clan, you will end up earning additional “Powerful Engrams” each week. Powerful Engrams are arguably more important than Exotics, because they ultimately help level you up the fastest. By the time you hit max Power Level, you’ll probably have all of the Exotics you desperately want. 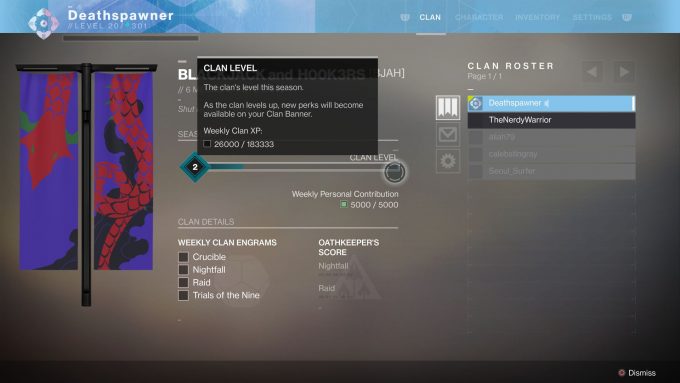 If you don’t like having to chat with other people while you game, you shouldn’t rule out joining a clan. There are definitely going to be clans out there catering to mic-less Guardians, so please don’t hold yourself back because you think a clan will force you to a certain playstyle. Looking for Clan lets you see which clans are actively seeking members, and also what they’re looking for in members. You may wish to spend some time looking through the list, as there are already many PC clans available.

If you don’t mind using a mic, it means you’ll be able to tackle the most difficult content Destiny 2 has to offer with greater ease. And, I will say this: some events in Destiny 2 dwarf the difficulty of the same events in the original. Nightfalls in particular have become a genuine challenge, and Prestige Nightfalls prove to be a true test of your character (and your loadout). With the raid, it’s extremely encouraged to come equipped with a mic, because it is not easy (or intuitive for those going in for the first time).