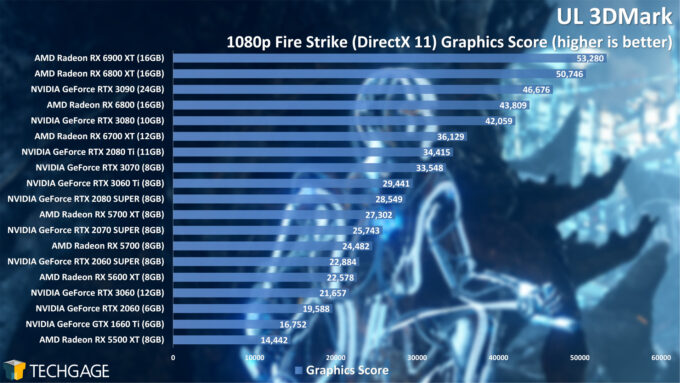 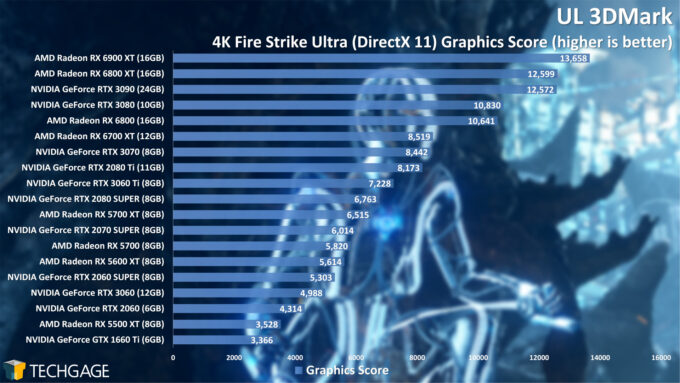 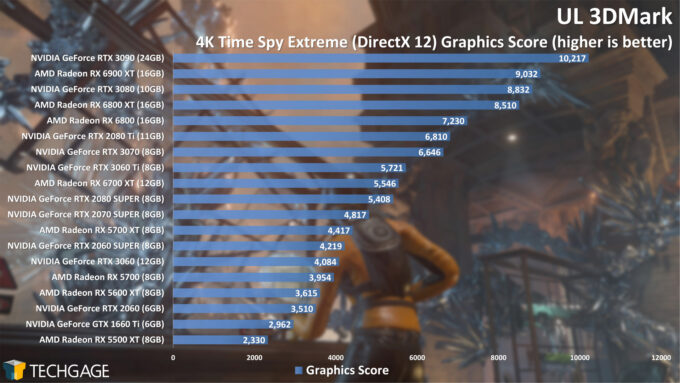 It’s not too often that we see a 3DMark score directly correlate with real-world gaming performance, and nothing really changes here. Despite matching the RTX 3080 overall in real gaming, the RX 6800 XT manages to surpass the Fire Strike scores of even the RTX 3090. Things change up in the DX12-focused Time Spy, with the RTX 3090 placing well ahead of the RX 6900 XT.

Perhaps these results are not truly relevant, but they at least give you an option to test your current GPU against ours, and get a vague idea of what kind of performance you’ll gain with a move to newer hardware. 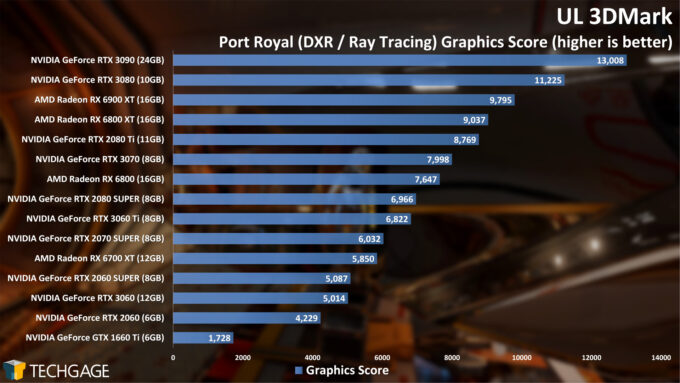 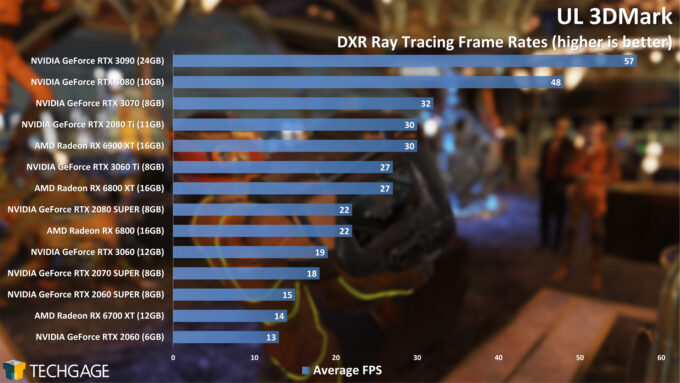 Given what we’ve seen in the past, and given what we know of AMD’s RDNA2 ray tracing capabilities, the results from these RT-specific tests don’t come as too much of a surprise. We will say, though, that AMD’s top brass performs quite well, all things considered. That said, a GPU like the RX 6900 XT manages only half of the frame rate of the RTX 3090 in the DXR test.

It’s worth noting that the Turing-based GTX 1660 Ti could run the Port Royal ray tracing test no problem, likely thanks to the fact that NVIDIA at some point added support to the driver. That added support doesn’t enable DXR support, however, as it doesn’t exist in GTX Turing hardware. Even with poor performance, it’s kind of neat to see the 1660 Ti sit among the rest in the Port Royal test.

Here are some other random sub-tests to round things out: 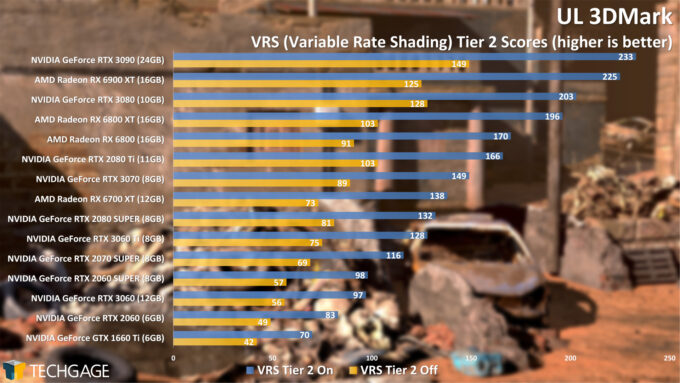 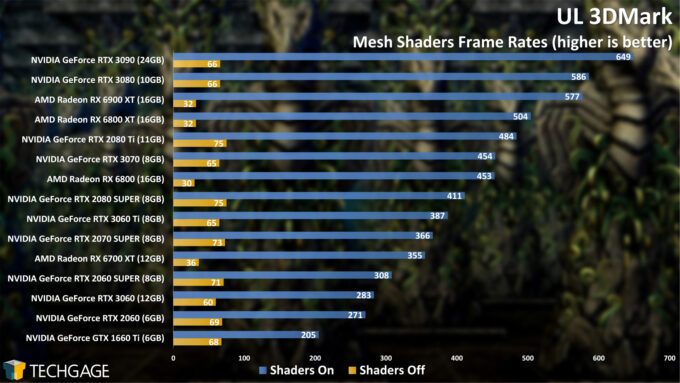 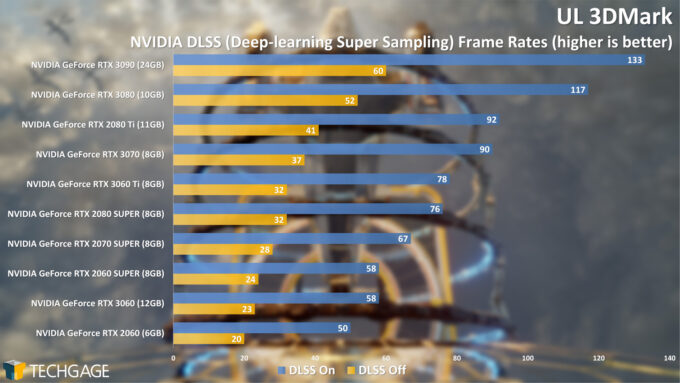 Both AMD and NVIDIA perform great in the VRS and Mesh Shaders test, although in the latter, AMD’s cards seem to suffer a lot more than NVIDIA’s when the shaders are turned off. Turned on, however, and scaling turns into something more expected, for the most part.

The final chart, for DLSS, highlights just what the special NVIDIA feature can do for frame rate. While DLSS is typically tied to ray tracing, it’s not always. We enabled DLSS in Outriders last week, and it doubled our frame rate as hoped. In fact, DLSS has proven far more impressive in that title than the game’s servers have (not to be bitter or anything). 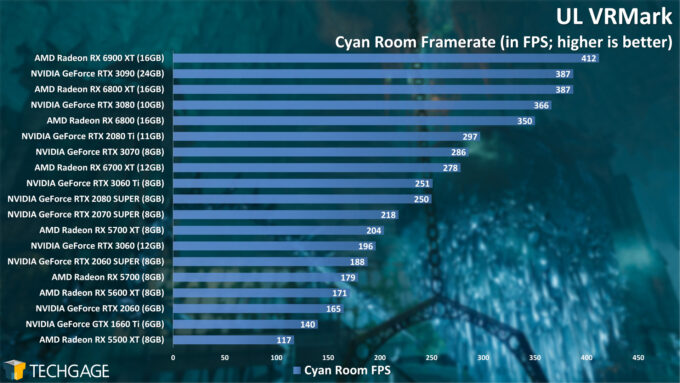 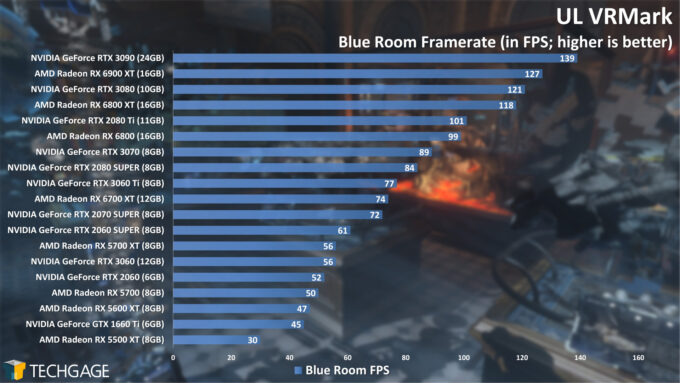 VRMark is a test that’s typically favored NVIDIA’s architecture, in a similar manner as the DX12-based Time Spy test does. Things have changed a little bit this go around, as AMD is keeping up to NVIDIA a lot better, with the top GPUs swapping places depending on whether it’s the Cyan or Blue test being run. If you truly care about VR, you’d not want to opt for a model below the middle of this chart. 6700 XT or RTX 3070 would make for a good starting target. 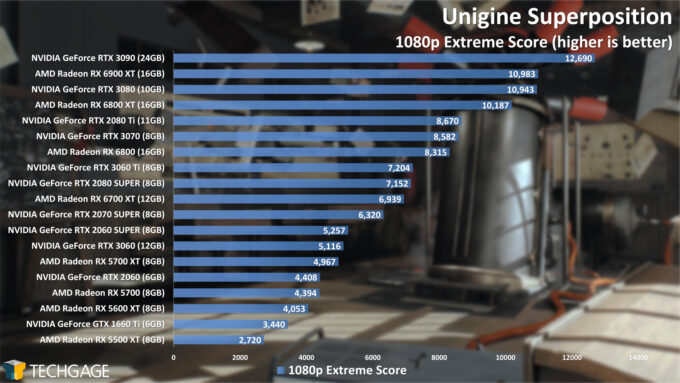 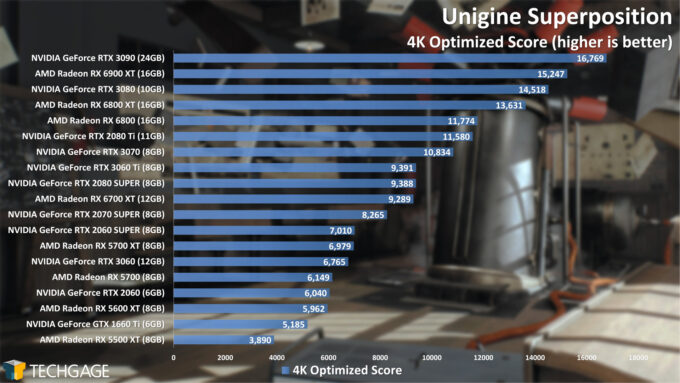 To wrap up our performance results, Unigine’s Superposition largely repeats what we’ve known already, although NVIDIA clearly has a bit more of an edge here than in some previous tests.