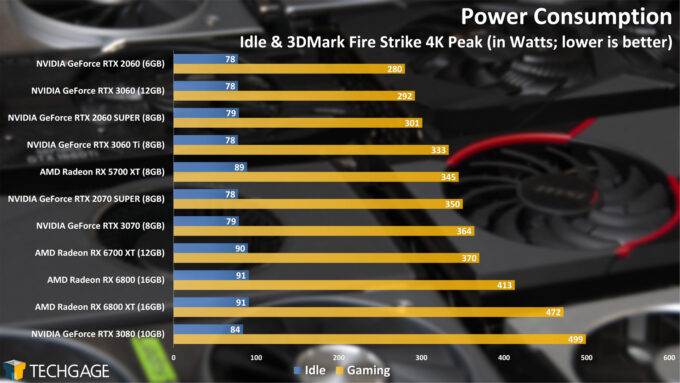 Some of the results here are quite interesting. NVIDIA’s new GeForce RTX 3060 uses just a pinch more power than the last-gen RTX 2060, despite being a bit faster and having twice the frame buffer. As for the new Radeon RX 6700 XT from AMD, it’s a fair bit quicker than the last-gen RX 5700 XT, but draws only 25W more.

It became so common back in the day that a new Radeon series would draw more power than NVIDIA’s competition that we simply expected it to continue with each go around. RDNA2 is different, however, as the RTX 3080 draws a bit more power than the RX 6800 XT, and while not listed this time, the 3090 draws more power than the RX 6900 XT. AMD is even winning the power consumption battle on the CPU side, so to say the company managed to turn things around that way would be an understatement.

If time was never an issue, we would like to include as many games as possible in roundups like these, but for this time around, we had to stick to our ten (or what would have been 11 if Siege benchmarked correctly). The games chosen to test with span a wide range of genres, and even partner favoritism (although again, NVIDIA’s sponsored Siege had to be dropped).

From these results, it’s become clear that AMD has really struck back hard in the high-end arena with its RDNA2 graphics cards. When NVIDIA released its first Ampere GeForces last fall, there’s no sugar coating the fact that we were really quite impressed, especially with regards to stack pricing vs. the previous gen. So it was only more impressive when AMD released its latest Radeons, and managed to largely keep up (if not surpass). 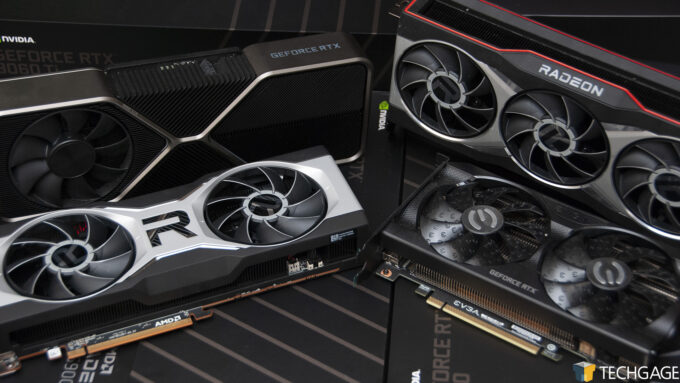 Both AMD and NVIDIA have strong feature sets, but ultimately, it can be argued that NVIDIA has the richer one, which means that depending on what you’re after, you may still want NVIDIA even if performance in some place is a bit lower than Radeon. That’s primarily the case if you care greatly about ray tracing, as NVIDIA has a stronghold on performance there.

With RDNA2, AMD technically caught up to the ray tracing performance of NVIDIA’s last-gen Turing, but the current-gen Ampere brings a notable improvement, and that’s not even counting DLSS, which can dramatically improve frame rates in games that can take advantage of it.

Another area NVIDIA has a firm hold on is the creator market, if you’re dealing with software that takes advantage of CUDA. Unfortunately for AMD, CUDA still seems to run the creator world, with there still being a handful of popular renders that exclusively use CUDA/OptiX. If 3D design isn’t your creator focus, then our upcoming article taking a look at general ProViz performance across a similar selection of GPUs should help.

Even if AMD is being held back by weaker ray tracing performance, and lacks some support for creator-type renders, the overall number of people impacted by either will be fairly small. Where AMD does well is delivering cards that gives users the top-end performance they’re after, with pretty favorable power consumption.

To either company’s benefit, what strengths exist barely seems to matter when users have to fight tooth and nail to secure a card from either vendor. While it seems more difficult than ever to find a new GPU to purchase, our perusal of popular hardware forums shows that people are still getting them, and without paying scalper prices (it’s clearly ideal if you don’t let yourself be ripped off by scalpers).

AMD and NVIDIA are going to be fairly happy either way, since all of their product is flying off the shelves before it can gather a speck of dust. For you, all we can do is wish you the best of luck, and hope that you don’t wear your left mouse button out before finally being able to buy one.

As covered earlier, we have other gaming GPU content in the works, including a look at 3440×1440 and 4K performance in a similar set of games that was tested here, ray tracing in a wider range of titles than we’ve tested with before, as well as fresh creator benchmarks. We also want to tackle some reBAR tests once those other content ideas are fulfilled. Stay tuned.