How could there be a benchmarking focused article without some Futuremark action? There can’t be. So, here’s the obligatory 3D Mark 01 and 06 results. Note that the score results for 3D Mark 01 have decimal places, but the real score does not. The decimal was added so that the graph would scale properly. Now, there wasn’t a huge difference in 01 per se, but 4GB proved slower throughout each overclock. What’s amazing though is the 06 results.. they are incredibly close. The biggest differential was 4 points overall. 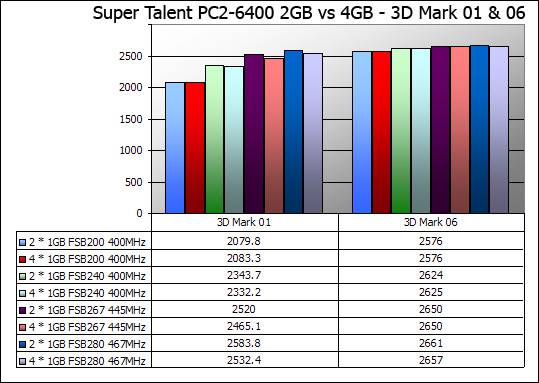 To test out gaming between the configurations, I used Half-Life 2 and Battlefield 2. Half-Life 2 is not ram intensive, so the primary goal was to really see if more ram would hurt the overall FPS. BF2 on the other hand was responsible for many people running out to pick up 2GB kits, so it’s results are worth noting.

The level used in HL2 was d1_canals_07, and BF2 was Dragon Valley. Results were saved using Fraps. All of the runs were manual with no automation software. Because of each run being manual, each one can throw different things at us. When I play through each level, over and over, I try to play the level as if I am playing it for the first time, to get more realistic results.

So the question really is.. on an Intel Chipset, does going from 2GB to 4GB hurt gaming performance? It sure doesn’t look it. 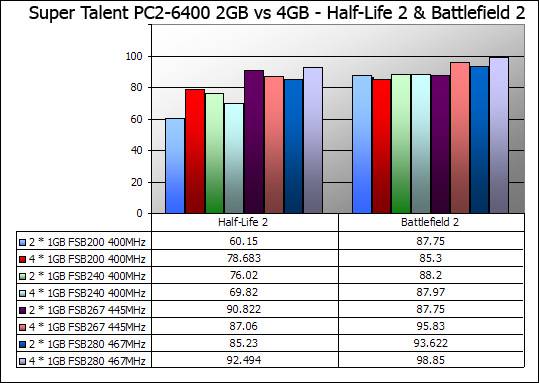 Whew, that was a lot of DDR2 testing. If you can keep up, let’s jump right into some hardcore DDR1 action.