While both the 2GB and 4GB configuration on Intel both used 2T timings, we didn’t originally expect the performance to decrease by a huge margin. That proved true, with only slight differences between each test. The latency hit was likely the worst result, but that was still minor. In our DDR1 testing, 2GB uses 1T and 4GB uses 2T, which means that we will be seeing some differences. Once again though, it will be a matter of how much difference to see if upgrading is a waste of time.

The modules I will be using for testing are the Corsair 2GB 3500LL PRO. These proved to be a favorite last year, and still sell like hotcake’s. Throughout out performance tests, you will see why. Despite them ‘only’ being rated for DDR438 speeds, they include the tight timings of 2-3-2-6. Why they prove popular though, is that the Infineon BE-5 chips that they use allow them to overclock extremely well.

Surprisingly, I found that these overclocked at 4GB just as well as the Super Talent did in our DDR2 testing. I immediately tried out 275MHz, and that was completely stable.. I was impressed. After a long night of tweaking, the modules were set at 284MHz with 3-3-2-0 timings, and were Prime and 3D stable. I have been using the PC at these speeds for the past week. 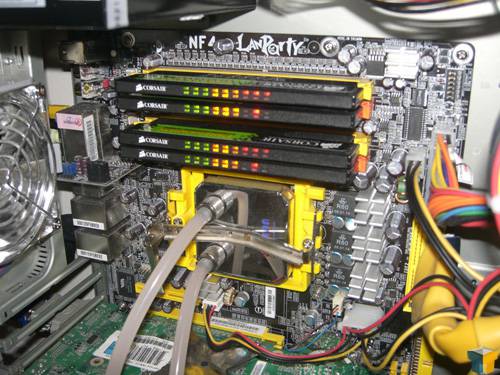 As I mentioned earlier, your results may vary from mine. Overclocking success depends on your hardware and the luck of the draw when it comes to how good the chips on your modules are. As my friend Ozzimark puts it, “In the overclocking game, he who tries the most things [tweaking wise], win.” It’s very true in this case.

I was -very- impressed that these modules worked at 284MHz in a 4GB configuration. That speed is rare in a 2GB config, let alone a 4GB one. Because they OC’d so high, I was extra anxious to get on testing to see how hard the 2T timings would hurt the results.

Without further ado, let’s get right into it.