by Rob Williams on August 30, 2006 in Miscellaneous

In the memory market, there are two things I am skeptical of. 1GB kits, and EPP. Today we are looking at a new kit from A-Data that has both. It proves to have some solid overclocking ability, thanks to it’s GMH chips. Are you willing to pay $200+ for a 1GB kit though? 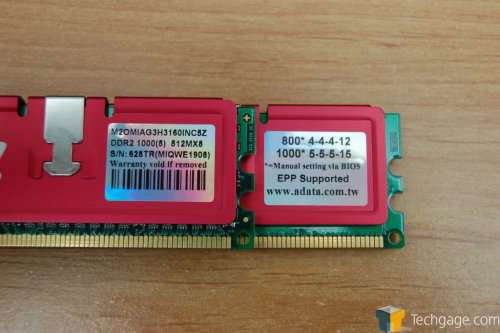 The modules have Micron D9GMH chips. I’ll wait while you get over your shock. Done? Ok, yes these chips are being used in almost every ‘midstream’ enthusiast kit. More expensive kits sometimes use D9GKX chips instead, which are binned 400MHz while GMH is 333MHz. Oddly enough, the non-EPP version of these modules use GKX chips… but cost the same. Right there… I would recommend getting the non-EPP version for that reason. Chances are good that if you are going to pay $250 for a 1GB kit, then you want the best performance possible. The non-EPP with GKX chips should prove better overclocking than these without any doubt.

Being the GMH that they are, I had expecations of what I could acheive, since most kits I review lately are GMH also. Well, they did clock quite well, but I was unable to push them beyond DDR2-1100 speeds. While 570MHz seemed stable, it would crash quick upon running any benchmarks. That was with 2.5vdimm which the M2N32-SLI maxes out at. Here are the successful overclocks:

DDR2-1120 proved rather unstable, crashing after a few runs of Sandra. I consider the DDR2-1100 overclock to be the highest possible on my machine. However, if you are willing or able, to go beyond 2.5vdimm, these will go further. Keeping CAS4 didn’t prove very successful much past 500MHz. 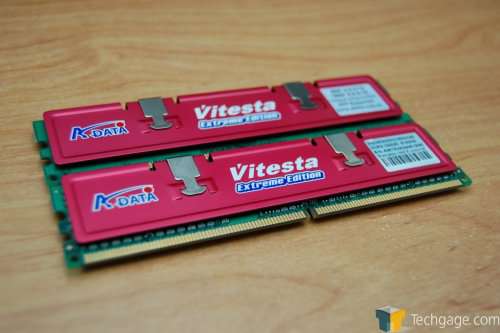 I chose the Corsair 1GB PC2-8500 kit to pit against these A-Data. They also use D9GMH chips, and I believe they were the first modules on the market to do so. All overclocks done with the A-Data were just as possible with these Corsair.