A Fine Line Between ‘Inexpensive’ and ‘Cheap’: BitFenix Neos Review

BitFenix’s Neos mid-tower chassis sits at the lowest rung of the company’s chassis product line. As such, it comes in at a very affordable $59.99 – a price that allows anyone to get a piece of the action. But a low price doesn’t always deliver on the “value” aspects we’d hope to see, so let’s find out what kind of value the Neos is.

There is a very fine line between “cheap” and “inexpensive,” and the BitFenix Neos absolutely doesn’t straddle it. It’s most definitely got its feet squarely on one side of that divide.

At a SRP of $59.99 it seems like it’s good value. It’s definitely accessible, especially for the most budget-conscious users.

However, I honestly cannot recommend it.

It’s just far too limiting (and limited). The dramas I discovered while trying to fit an aftermarket CPU cooler inside it are quite ridiculous. Consider that most tower-style CPU coolers now use 140mm fans; unfortunately, most tower-style heat sinks just won’t fit within the 158mm maximum CPU cooler height specified by BitFenix for the Neos. Believe me, in the throes of absolute desperation to finish up this review, I did a ton of research on what heat sink could fit inside the Neos. I even wanted to spend my own money, just to get a cooler that would fit. Rob wouldn’t have that and arranged for a third-party to send me a suitable heat sink, and it still took two bites at the cherry before we got a compatible cooler.

One that finally did is an older model that’s fitted with a 120mm fan. Now there’s nothing intrinsically wrong with a smaller heat sink; the thing is, though, is that they are getting harder and harder to find because the world has already moved on to coolers designed to work with bigger fans. You might argue, too, that you can always use your CPU’s stock cooler. The thing is, I don’t want to use stock coolers because they don’t perform as well as aftermarket solutions. The Neos just forces users to use inferior equipment in their PCs. That kind of built-in restriction just seems anachronistic and, well, stupid. It’s also unacceptable, in my opinion. I cannot think of one good, logical reason to limit the Neos’ compatibility with current-generation PC components.

The Neos’ petite dimensions all conspire to make building a PC inside it an exercise rife with frustration. There’s just no good engineering-based excuse to make it so damn hard to work inside of. At least I can’t come up with one.

Then there are the other baffling design decisions that may simply be coincidentally and inconveniently incompatible with my specific hardware combination. I’m talking about the CPU backplate cut-out that’s just a bit too small. It’s pointless to have a convenience feature like this if you can’t take advantage of it. The lack of room at the top of the chassis also makes it far too difficult to do something as basic as plug in the CPU power connector or completely screw in your motherboard. You’d need a little girl’s hands to do these things in the Neos, unless you anticipated the problem and worked out a solution beforehand (assuming there is one available). Even then it’s still inconvenient and far too much to demand from a user. 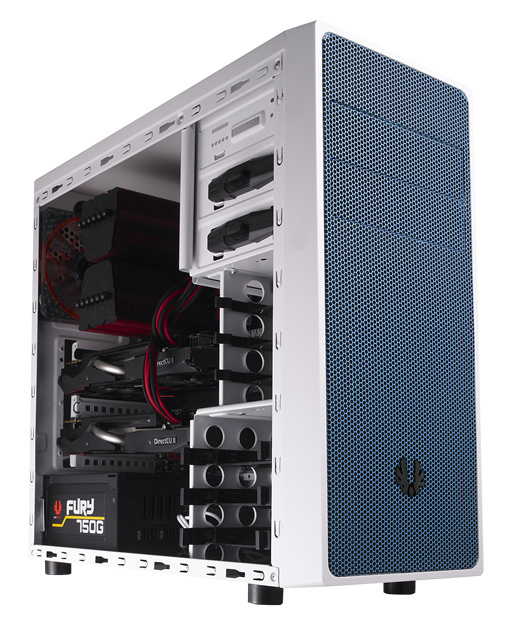 If the Neos had redeemed itself through a spectacular performance in the thermal tests, I’d be less critical of it. However, because it only came with one fan (which had to be removed because I needed its mounting position for my GPU’s radiator), it ensured a woeful performance in these tests as well.

Plus it seems to be made of the softest steel around, as well as plastic bits that feel so flimsy that I’m afraid they’d break if I just looked at them the wrong way. “Disposable” PCI slot covers also seem to be a throwback to a bygone era of PC chassis design. This isn’t a chassis you’d feel good about using if you want to go through multiple upgrade cycles with your custom PC.

About the only positive thing I could say about the Neos in terms of its performance characteristics is that it dampens sound really well. Oh, the multiple color combinations available are nice too, if vanity is that high up your own priority scale.

Stacked up against everything, though, you can only conclude that the BitFenix Neos is simply woeful. The design feels old, updated maybe with a modern touch here or there (the cable management holes, the CPU backplate cut-out). As such, perhaps it embarrasses itself with its name. After all, “Neos” comes from “neo,” meaning new.

Maybe it should have been called the “Antiquis” instead.

Whatever its name, it unfortunately will always be known as representative of the worst iteration of the concept of value.