Modularity and customization are at the heart of PC building. With so many different components and needs, it’s hard to find a chassis that can do it all. Cooler Master’s MasterCase series aims to please as many builders as possible. Now with the MasterCase Pro 3, mini-tower builders now have something to work with. Let’s check it out in this review.

Working inside of the MasterCase Pro 3 is simple. The ability to remove both the front and top metal brackets to attach fans made the installation of the Thermaltake Water 3.0 Extreme a breeze.

For this build, we chose to place it at the top of the chassis and with the top removed, it took little time to get everything in place.

For this build, like the In Win D-Frame Mini, we’re using the ASUS P8Z77-I Deluxe, a mini-ITX motherboard. Because of this, the standoffs needed to be moved.

I’ve had a small tool to remove these over the years but Cooler Master included a Philips screwdriver adapter that makes the removal and tightening of the standoffs in the correct holes an absolutely simple procedure.

With the motherboard in place, the PSU and drive installation and cable management was next. The MasterCase Pro 3 offers plenty in the way of cable management. With the smaller size of the P8Z77-I, we had to stretch both the primary and auxiliary power cables to their limit but we got everything connected with a little slack left over. Once power was in place, the IO connections were made and the fans connected.

One thing to note; the motherboard we used only has two fan headers. Thankfully the fans that move air across the Thermaltake radiator connect to a splitter, so with those connected the other header was used for the water pump. Because both headers were occupied, we needed to power the front and rear chassis fans directly off of the power supply. Thankfully Cooler Master includes a pair of Molex to 3-pin fan adapters with the MasterCase Pro 3. With these connected and the Intel SSD installed, the only thing left was to power the system up.

For those of you skipping to the conclusion, the Cooler Master MasterCase Pro 3 is as close to a perfect smaller form factor chassis as I’ve seen in a long time. Cooler Master decided to depart from the standard boxy look of the majority of other PC chassis and gave the Pro 3 the same beautiful angles of the MasterCase mid towers. Like a Cadillac, at a distance you know it’s a car but it’s the angles that really set it apart when viewed at a closer distance. The same can be said of the MasterCase Pro 3.

Internally, the case had no sharp edges that I could find, and the installation of the various components was made simple by the removable brackets. Airflow inside the case was ample and should you find your system running hot, an additional 140mm can be added to the front. In our case, we had a dual fan 240mm radiator, but given that the chassis does not ship with anything up top, an additional two 140mm fans can be installed for additional cooling capacity.

Cooler Master has devoted a lot of engineering hours to the tinkerers in the PC community. It, amongst a few other companies, have seen the benefit to a modular design and the fruits of its labor have led us to the FreeForm Modular System. If you go to the Cooler Master store, you can find a section devoted just to its modular system PC cases. At the time of writing, the only products are for the larger MasterCase Pro 5 but a few could be used for any chassis, like the universal VGA holder for GPUs that like to sag. I’m looking square at you, pair of 970s in my own PC. 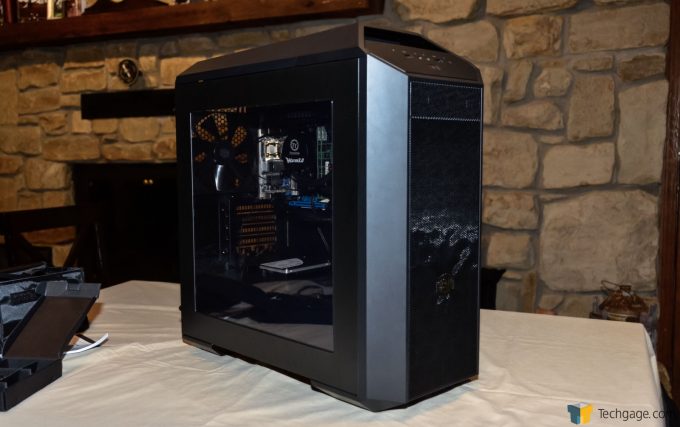 It’s difficult to point out anything glaringly wrong with the MasterCase Pro 3. The one thing I originally spotted was the lack of a dust filter behind the perforated panels at the top and front of the chassis. Once the MasterCase Pro 3 was disassembled for pictures, I noticed that there is a very fine wire mesh that sits behind each panel so rest easy, the times you will need to vacuum out your chassis will be kept to a minimum.

Cooler Master’s attention to detail in the MasterCase Pro 3 is impressive. Most of the thumb screws found in and around the chassis are captive, meaning as you remove them, they remain in the part being removed even after disengaging from the part they screw into. This helps prevent the loss of screws and I find to be a nice touch.

The lack of sharp edges is another bonus as well. Many cases I’ve worked in over the years have had their share of sharp edges. As we worked with the MasterCase Pro 3, it was picked up and rotated with multiple areas and exposed edges being grasped when moving the chassis. None were found to be sharp enough to leave more than an indention in our hands.

On a personal note, almost all builds that I do for myself, family or friends, with the exception of my primary desktop, use mini-ITX or micro-ATX motherboards. The industry has done a stellar job embracing smaller form factor builds and I find that Cooler Master is no exception.

The Master Case Pro 3 is a perfect example of a company paying attention to the needs of the community and then engineering those needs into its products. It isn’t alone in doing this, but the final product, and focus of this review, is damned near perfect for a smaller build and one that I think most people can appreciate.

At a price well below $100 USD (at time of publishing). I’ve found it at a few places for under $90 USD. That’s a great starting point for any builder looking to go the smaller route and should leave a few pennies more in your budget for a faster CPU or GPU.

When all is said and done, the Cooler Master MasterCase Pro 3 is a phenomenal deal and one that should be on most everyone’s short list when upgrading an existing system or building a new one. Because of all of this, the MasterCase Pro 3 earns an Editor’s Choice award.