The launch of Intel’s Z97 chipset is right around the corner, and with Intel’s Haswell refresh, “Devil’s Canyon”, not due out for another month or so, the star of the show is the myriad of motherboards from all the usual vendors. Once again, ASUS’ collection of boards is quite large, so let’s dive right in, and tackle new features as well.

Most of the focus of this article up to this point has been on ASUS’ mainstream series, which is because it’s the most popular series ASUS has, as its denotation would suggest. The company has a number of non-mainstream boards worth talking about though, and quite honestly, these are the boards I generally have the greatest amount of interest in, thanks to their specific focus.

I’ve long been a fan of ASUS’ SABERTOOTH series because it has an enormous focus on durability and long-life, and for similar reasons I’m starting to dig the GRYPHON mATX series. Both series fall under the TUF label, a name that explains itself well. 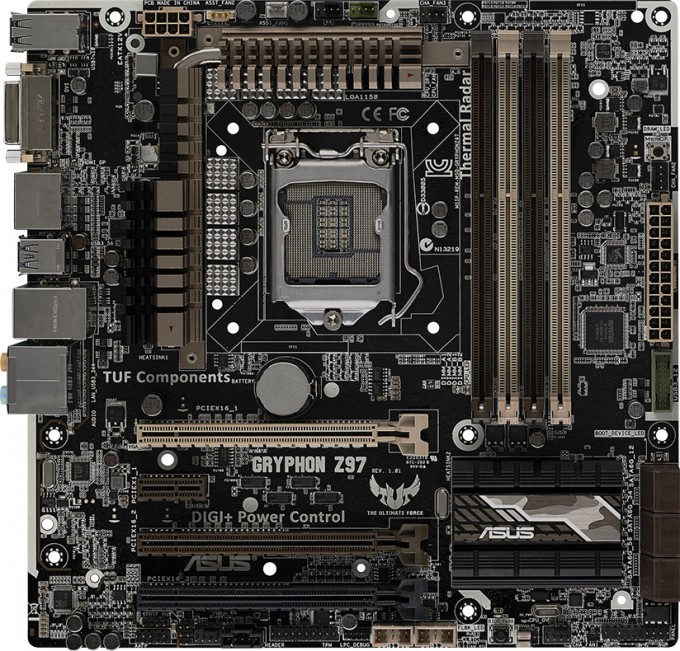 Like the SABERTOOTH, an “Armor” version of GRYPHON Z97 will be made available: 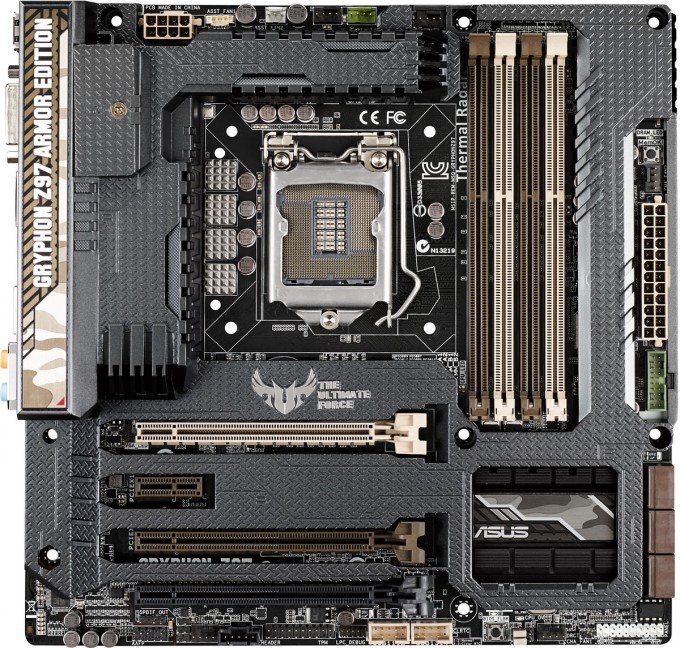 Speaking of SABERTOOTH, ASUS will offer both the Z97 Mark 1, and Z97 Mark 2. Contrary to the numbering, the Mark 1 is the more expensive board, thanks to its armor inclusion. 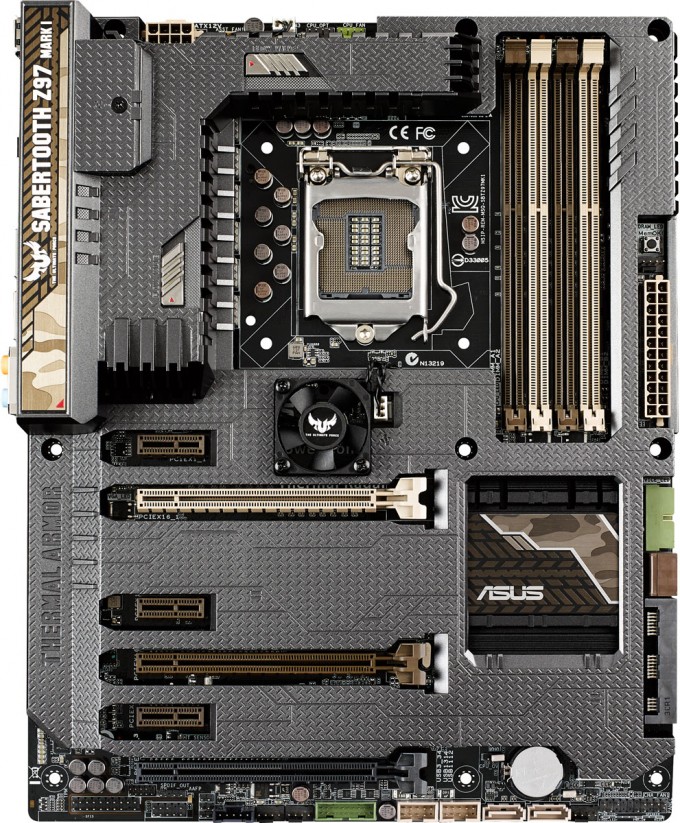 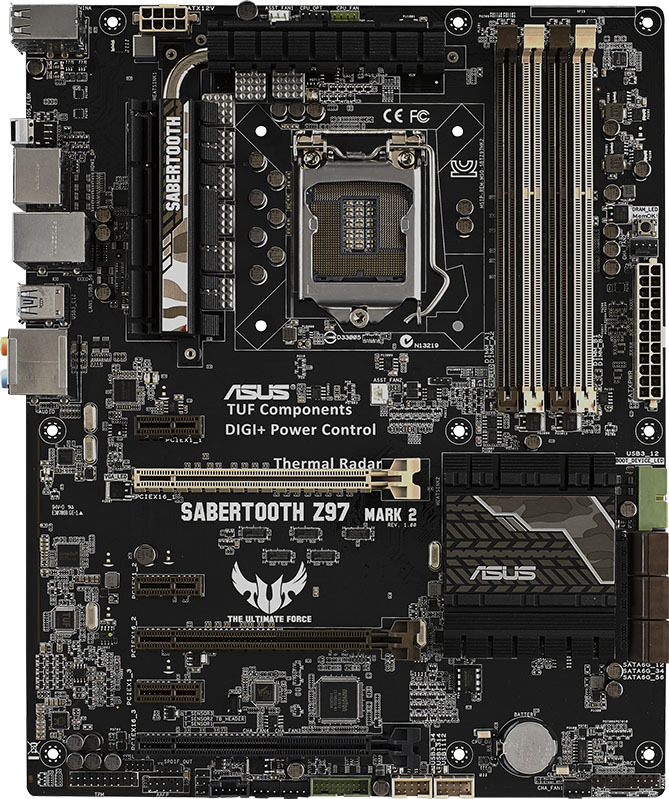 All TUF series boards feature Japan-made 10K capacitors, military-spec MOSFETs with lower RDS, and multiple electrostatic guards (for KB+mouse, USB connectors, audio connectors, and LAN port). The SABERTOOTHs will come equipped with a thin backplate that adds rigidity – a nice touch, since no one likes a bent motherboard.

There’s a lot to talk about with the TUF series, but I’m hoping to take a look at one of these boards in the future and talk more about those features at that time. What everything really boils down to, though, is that TUF is designed to be tough… seriously and genuinely tough.

After looking at the photo of the Z97-WS below, you’ll know as much as I do about it. This is one board in particular I’d like to take a good look at in the future, because the the WS series’ seriousness excites me. Weird, I know. 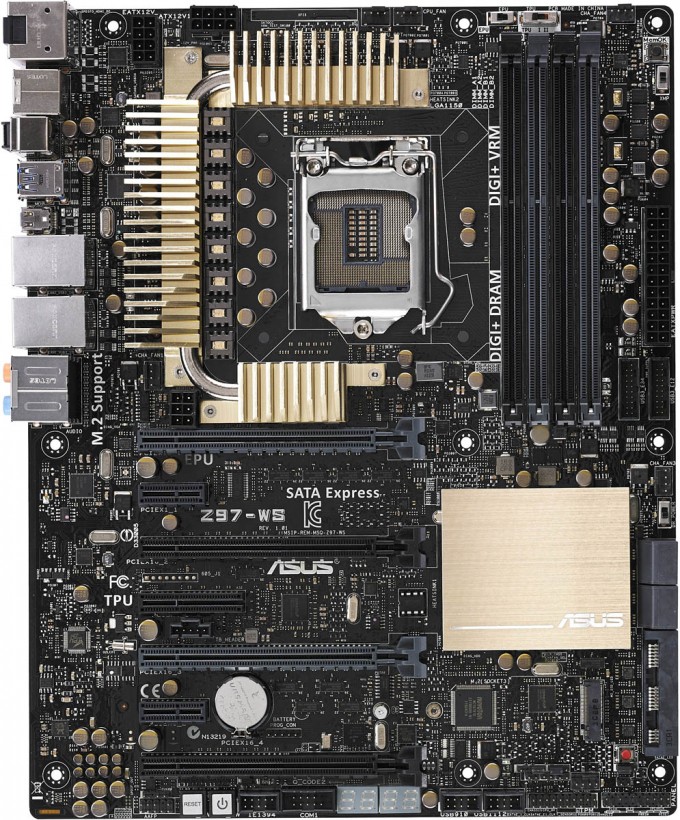 For those looking for a gamer-focused motherboard, ASUS has six to choose from here, all falling into the RoG MAXIMUS VII lineup. The higher-end boards are the EXTREME (the eATX option) and FORMULA, while the mid-range is HERO and a brand-new offering called RANGER. Smaller form-factors are taken care of with the mATX GENE and mITX IMPACT. There’s a lot of shouting going on in these titles, which might be why the RoG series is one of ASUS’ most noticeable.

Unfortunately, I don’t have photos for the top-end boards, but do for those in the middle of the pack: 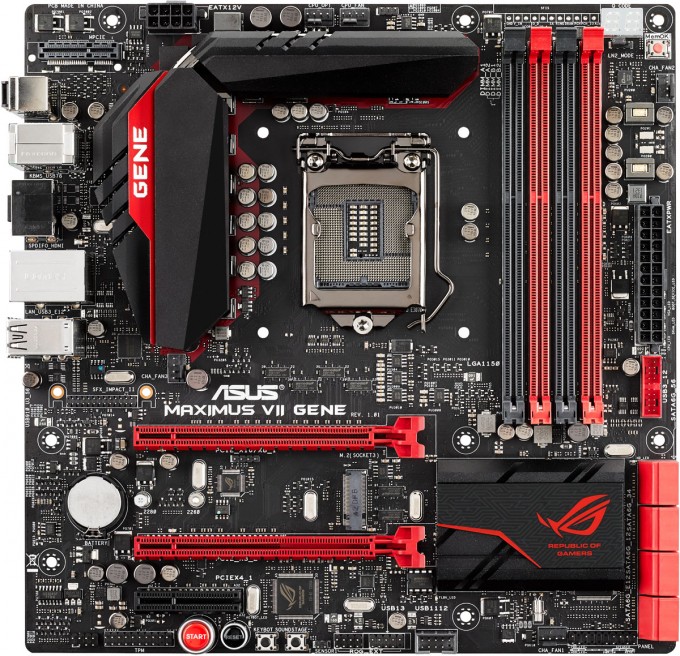 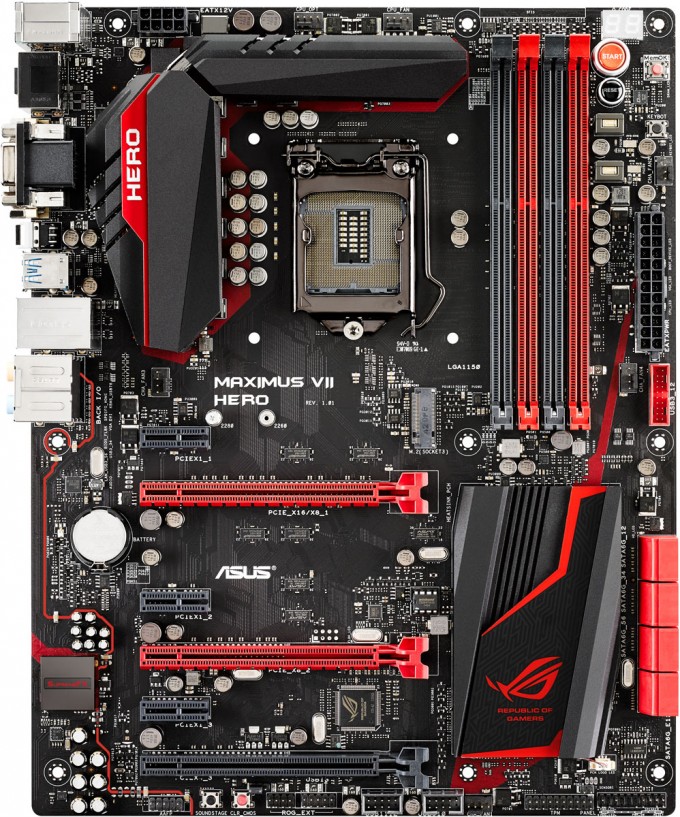 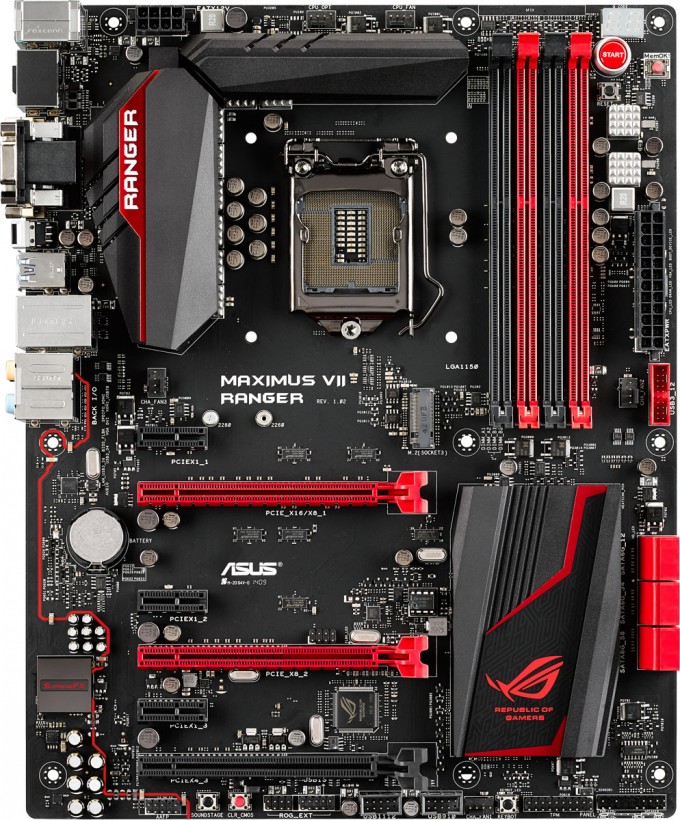 The most intriguing feature on this generation of RoG boards is KeyBot, a chip + software solution (yes, yet another onboard chip enters the arena). When a keyboard is plugged into a specific port, you can give it some interesting abilities, such as hitting Delete when the PC is turned off in order to turn it on and go straight to the EFI, hitting F12 to apply an XMP profile, or F11 to boost your CPU’s clock.

Further, with KeyBot you can also create macros, assign keys to become shortcut keys or function keys, and even assign a button that seems to store your password (hopefully securely) so that logging in can be done very quickly. 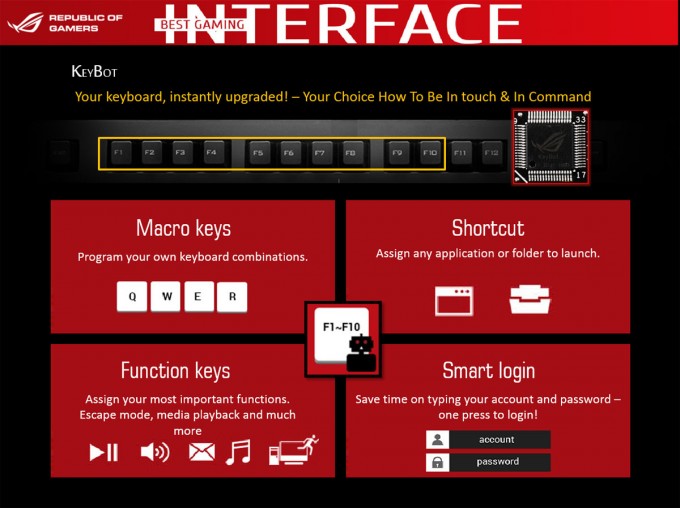 A big part of gaming is going online, so ASUS has implemented a number of networking enhancements on RoG. For starters, an Intel onboard NIC is used, which is pretty-well standard for all of ASUS’ boards at this point. Further, LANGuard helps protect the NIC during a power surge with the protection built into the port itself, and the GameFirst software helps you fine-tune priorities to your heart’s content.

On the audio side of things, SupremeFX and Sonic Radar II help deliver the best aural experience possible with the use of a robust software package, and includes an ability to set profiles regardless of which OS you’re in (I presume through an onboard switch; it’s not entirely clear).

In addition to all of that, the RoG boards have a big focus on hardware protection, so you can expect a healthy assortment of over-current protection, ESD guards, stainless steel I/O panel, 10K capacitors, and backplates.

In truth, this preview could have been twice as long, but I do think I covered the most interesting bits. As I mentioned before, when we take a look at a motherboard from a given series, we’ll talk about all of what it brings to the table. ASUS’ mainstream series will be our first tackle, with the Z97I-PLUS. I showed it earlier, but here it is again, because it’s so cute: 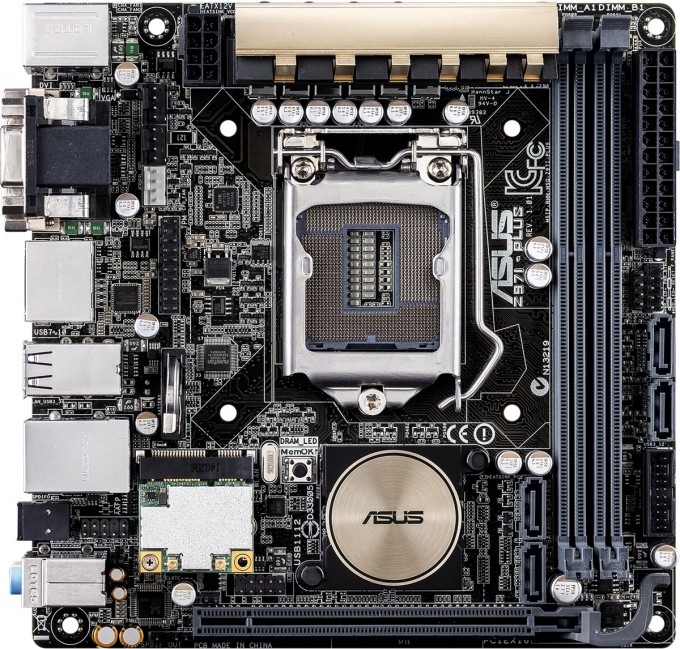 It might seem odd to kick coverage off with a super-small motherboard, but I just love these things – they’re small, yet extremely feature-packed. Despite its small size, this board doesn’t lack anything the bigger boards from ASUS’ mainstream lineup have – outside of the limitations created by the amount of space for onboard components, of course.

So what do you guys think? Did ASUS do well? Is there a certain model you’d like more than any other?