by Rob Williams on February 17, 2018 in Peripherals

Cables might be a necessity at times, but they’re not all the time. Even in spots where you think you’d absolutely need a cable (eSports!), you may just need a better tool. Enter Corsair’s ‘Unplug and Play’, with the wireless K63 keyboard and Dark Core mouse – both offering 1ms latencies. For good measure, we’ll also take a look at the MM1000 mousepad.

The MM1000 mousepad isn’t going to be one that many people pick up on a whim, something its $80 price tag secures. Why it’s so pricey is simple: it features Qi wireless charging, and even if you don’t have a Qi-supported phone, you can still take advantage of it.

To help smooth out the pain of the price tag a little bit, Corsair includes a few adapters that lets you charge your micro-USB, USB-C, or Lightning mobile devices. In order to power the charging, a thick dual-ended USB cable must be plugged into two different USB 3.0 ports on your PC. This is a big requirement for a freaking mousepad, but on the upside, a USB 3.0 port is included on the mousepad itself.

Personally, because I often forget to charge the mouse wirelessly (it’s hard when you’re not used to it!), I’ve kept the cable that shipped with the mouse plugged into the mousepad, and then charge it with that if the battery gets really low (though there are admittedly shorter cables for the purpose). Some day, I’ll get into the habit of using the Qi wireless nightly, and I hope that day comes soon.

Despite all of that forgetfulness, I did test out the Qi charging to a certain point, but this is a technology that’s really hard to benchmark. That’s made worse by the fact that the Corsair Utility Engine (CUE) software doesn’t show a real level for your battery; it’s either charged, half-empty, or nearly dead. Most wireless products I’ve used have shown battery percentages, and it’s for good reason.

That said, it’s simply too hard to properly say how long this mousepad takes to charge the mouse from bottom to full. It’s easier to gauge this kind of thing with a smartphone, since it actually has a precise battery-level value, but that phone would also have a larger battery, so basing performance on that isn’t exactly fair to the mouse with more modest hunger demands.

I will say that if you have a smartphone at 0%, it won’t likely be fully charged 8 hours later. I’d figure more like 60% for a 3,000mAh phone. So, it’s certainly not a de facto solution, but it’s good enough if you want to top-up while you’re working at your PC. The mouse will however completely charge in the same amount of time, but probably less (again, it’s just too hard to measure).

There’s an indicator near the mousepad’s cable (that is still weird to say) that lets you know if the device you have on the mousepad is charging. If the light rapidly blinks, it means you don’t have an optimal fit. A single blink each second means that you’ve found the Qi spot (good work), and once the blinking stops, the device is fully charged.

A Quick Look At CUE

We’ve talked a lot about Corsair’s CUE software in the past, so I won’t get too deep into explanations here. At every launch, the software will detect each Corsair device plugged in, and then populate the area at the top with icons to access them. There are only two here, but essentially every current peripheral from Corsair that plugs into USB will likely appear in this software.

The CUE software does its job well, and there isn’t too much I can complain about from a usability standpoint. Macros are pretty straight-forward to create, and every other setting is to adjust. I will point out that it’s generally worth running the surface calibration tool on your mouse, since it’ll probably feel just a bit more accurate afterwards thanks to the sensor tuning itself. 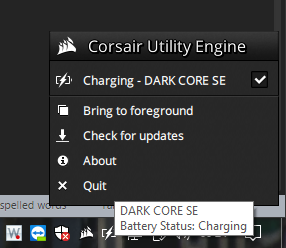 In the case of this particular review, I wish some things were improved-upon with CUE. When you right-click the system tray icon, you see a couple of options, as well as the plugged-in peripherals listed at the top along with their charging status. For some reason, the K63 wireless simply doesn’t appear there, but it is visible inside of the software itself.

Overall, these complaints are pretty minor, and while I’m not sure about the latter points, the issue with the K63 not showing up in the menu is sure to be fixed at some point. These peripherals are pretty fresh off the line, so niggles like these are understandable. Kind of like the one that asks me if I want to change the LED to “Ice Blue” on the K63, when that actually requires another keyboard SKU.

After spending a couple of weeks with these wireless peripherals, I’m pleased with what they bring to the table desk. They’re not without issue, but the issues that do exist seem to be pretty minor, and could be fixed with firmware or CUE updates.

In the first few days after hooking these peripherals up, I encountered occasional skips when moving the mouse, and on very rare occasions, the keyboard couldn’t keep up with what I was typing (not a brag; there was an obvious problem!). After talking to Corsair and perusing other people’s thoughts on these peripherals around the web, it seemed obvious to me that line-of-sight was my problem. After moving the wireless receivers to a better location with the help of the included adapters, the issue seemingly went away completely (I will update if the issue returns). 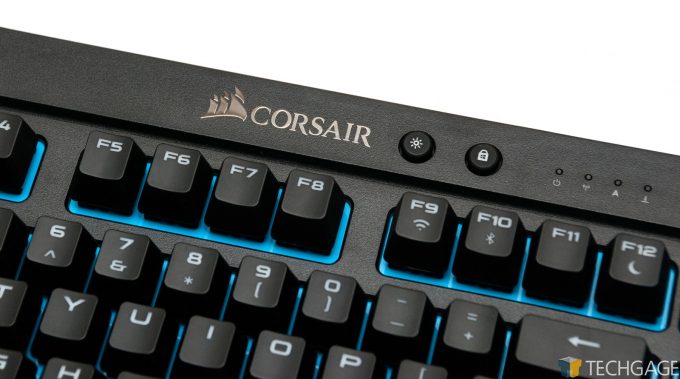 If there’s a downside that most people could agree on with these peripherals, it’s that it costs quite a bit to get hooked up with this same setup shown here, and really, it’s almost entirely because of the mousepad. An extra $10 on a mouse is no big deal, but an $80 mousepad is $60 more than most people would think to spend. Buuuut… what other mousepad has Qi wireless charging, or includes a USB port? 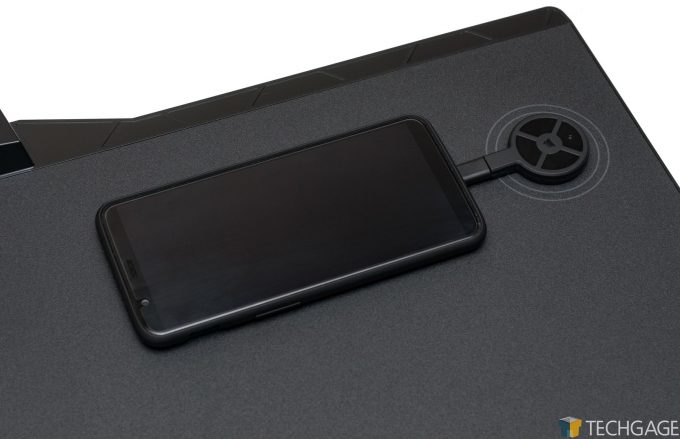 Admittedly, one thing that would have justified the high price more for me is if the MM1000 were a dual-sided mousepad, but even that point can be argued. The bottom of this mousepad is rubber, and it simply will not move around your desk, unless your desk happens to be made of oil (I didn’t test this). Plus, if you’re pairing it with the Dark Core, you’ll already be using an ideal surface for the mouse you have.

For the good, all three peripherals work as intended. I truly appreciated the mouse being wireless, and without any noticeable performance impact (over wired). I have seen some comments around the web that the mouse isn’t great looking, or that there are other odd decisions made, but for me, I found it to be very comfortable overall, and I don’t care if a mouse is ugly if it does its job well.

I’d be remiss to not mention that the mouse and keyboard in this article can be paired with a complementary lapboard, allowing you to really take these wireless peripherals on the go, and by “on the go”, I mean “to the couch”. Once you lock the keyboard in, you can sit back, relax, and get your game on. As mentioned before, we have a lapboard here, so I’ll be taking a “sit” at it in the weeks ahead.

If you have any questions about these peripherals that I didn’t comment on, please leave a comment!

Feb 19 Addendum: It turns out that I’m not alone with the occasional hitching that can occur with the Dark Core mouse. [H]ard|OCP‘s Kyle Bennett has also encountered the issue, but to a much more significant degree. The hitching I encountered would happen once in a while, whereas his mouse can’t even keep a connection. I’ve been having solid luck outside of the line-of-sight issues I believe I had, but as mentioned before, I will continue to use both the Dark Core and K63 for a while, so potential issues can’t elude me.