A Look at the SteamOS Beta on a Custom PC

Valve’s much-anticipated Linux distribution, SteamOS, is here – at least in beta form. Despite it being early days, we couldn’t wait to see what the OS brings to the table (at this point), and what it’d be like installing it to a custom PC (hint: it’s hit-or-miss). One thing we know for sure: Linux’s gaming future is bright.

As an OS bound for the livingroom, Valve doesn’t expect many people to make use of an actual desktop, but for those who will, one is made available. At the moment, it’s as slim a GNOME 3 desktop as one can get, with even something as simple as sound missing (that’ll be added later). Networking however works just fine, so whether for trouble-shooting or browsing the Web in a more sane manner if a keyboard and mouse is plugged in, this desktop is just a click away.

To save on system resources, this desktop environment isn’t loaded at boot; rather, it’s triggered once the “Return to Desktop” option is used from within SteamOS. Like most Linux distributions, the main desktop (in this case, SteamOS) is loaded to session #7; the GNOME desktop, by contrast, loads in session #8. These sessions can be jumped to with the Ctrl + Alt + Fx keyboard shortcut. If an issue ever occurs where either SteamOS or the GNOME desktop cannot load, a low-level terminal can be accessed through Ctrl + Alt + F3~F6. 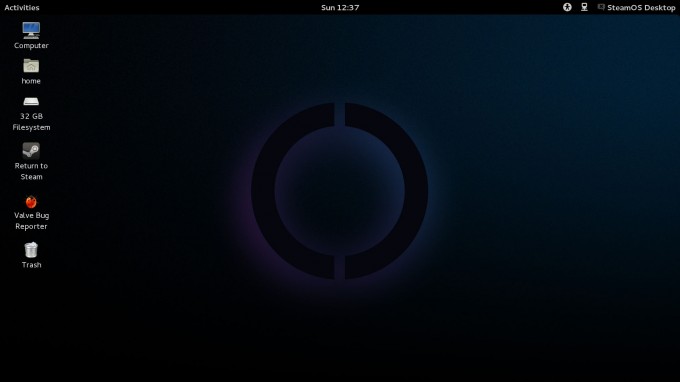 Nonetheless, at this desktop, storage can be plugged into the PC to be mounted automatically, and for video, VLC has been preinstalled (seen in the app’s list below). Again though, sound in this desktop environment doesn’t currently work, so running VLC is kind of pointless. An experienced user could no doubt get sound working, however. 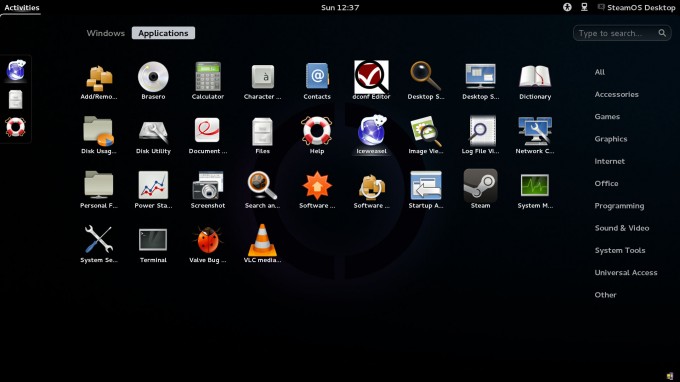 In time, I’m sure that this desktop environment will be enhanced to be a little more welcoming and usable, but this is just a beta. If you’re looking to expand on things, you could add an official Debian repository and install another desktop environment, though as that’s something I’ve not done, I can’t say whether it’d be simple or not. Since Valve handles the login manager with SteamOS, actually getting to the new desktop environment might prove to be the biggest challenge.

I’ll try to keep things as concise as possible here, but whew, there’s a lot to talk about. First, the bad.

One issue I didn’t clue into at first is that SteamOS assumes HDMI audio is going to be used. Have onboard? That’s all fine and good, but it’s been relegated. While pursuing the official forums, I could see that this issue will be fixed in a future release. For now, the options are A) Stick to HDMI and B) Fiddle with Linux’s audio system. The latter makes me want to pop an eye out, so I just unplugged the green audio and DVI cables and made use of HDMI instead.

Overall, HDMI audio works quite well in SteamOS. I did run into some issues with select games, however, such as Trine 2. As soon as I loaded the game up, the audio just died, never to come back until a reboot took place. This is the kind of issue that Valve needs to wipe out before the final release, and I hope it does. A regular consumer isn’t going to want an issue where rebooting the “console” is the only fix. 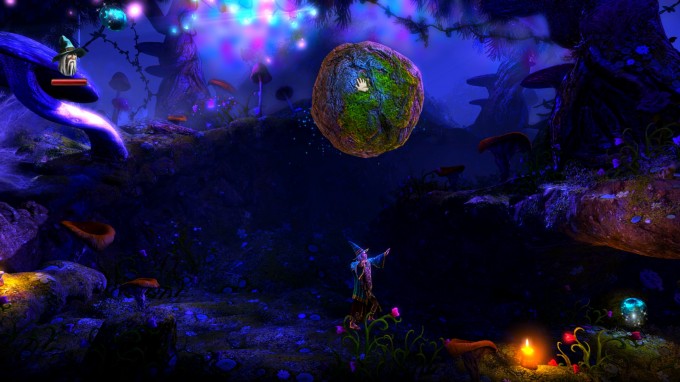 On the topic of Trine 2, that game introduced another interesting problem. When launching the game, a configuration box appears, requiring a mouse to navigate (Spectraball presented the same issue). Obviously, this could prove to be a big problem for someone kicking back on the couch. This is another issue I’m sure Valve is aware of and will fix, because when the goal is to have SteamOS act as a livingroom PC, it can never be assumed that the user has a keyboard and mouse.

The problems didn’t stop there. While I could connect my Xbox 360 controller to the PC no problem (it worked immediately, despite requiring a wireless dongle), it didn’t fare so well in all games. In the above-mentioned games, it did once I got to the main menu, but others proved problematic.

Serious Sam 3: BFE is one example. Here, the gamepad wasn’t even detected, which is strange because I’ve had no issues with the same gamepad and game through Ubuntu. With Metro Last Light, a game that touts full gamepad support, the result was a twitchy mess. The buttons wouldn’t do anything, despite console commands being shown on the screen (I had to take the battery out of the gamepad just to regain control of the machine, and then use a keyboard to exit the game). 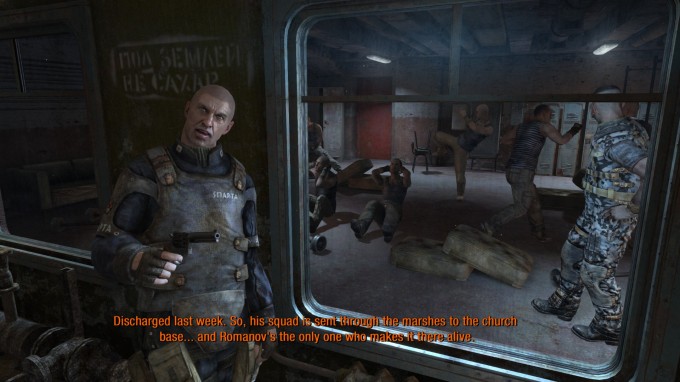 A couple of these issues are out-right game-breaking, while the rest are just minor annoyances that will likely be ironed out. Things will vastly improve once developers start designing their games with SteamOS in mind, and we can only hope that some developers will find it to be worth their time to update their older titles for the platform to help negate issues like these.

Alright, enough with the bad: Let’s talk about the good.

Again, starting from the top, I found SteamOS’ performance to be fantastic. Granted, I was testing the OS on a capable PC, but even so, the behavior felt just as fluid as it would (or should) on a highly-tuned game console. Unlike the desktop, which requires up to a billion operations to take place before a game is loaded for the first time, SteamOS takes care of that hassle ahead-of-time.

Depending on the hardware in question, upgrading a Steam Machine shouldn’t prove to be too much of a hassle. When I first installed SteamOS to the test PC, it had a last-gen mainstream NVIDIA GPU. Because I wanted to test out games like Metro Last Light, I craved some more GPU horsepower. After shutting down and replacing the GPU, SteamOS acted like nothing had changed when I boot back up. The new model was reflected on the system screen, however, and the performance improvements were ready to be enjoyed. 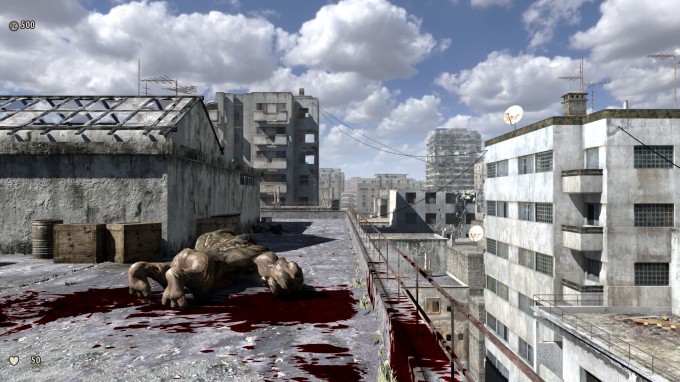 Being that I’ve done upgrades like these on my own desktop, it didn’t surprise me too much that it worked this way, but it might surprise those who’ve never done it before. The same change on Windows would result in a low resolution desktop on first boot, and then require a couple of minutes for the driver to sort itself out. The contrast between the OSes in this regard is stark.

Because I upgraded from an NVIDIA GPU to another one, it’s not too much surprise that the process was seamless. Had I installed an AMD card, I’m not too sure what would have happened, and because SteamOS doesn’t currently officially support those, that’s something I didn’t test (I will once SteamOS final comes out).

Most SteamOS perks I could talk about have to do with its interface, which as mentioned before, is the same thing as Big Picture on the desktop. I find this interface to be intuitive for the most part, and undeniably fluid. Some might not like the fact that SteamOS didn’t get a special UI, but this works, and it works well. I don’t doubt that things will be changed down the road, however, especially once additional functionality gets added (game and content streaming, for starters).

One aspect of the interface that does take getting used to is the character input when using a gamepad, which requires the use of the right analog stick to point in one of eight directions and then one of the four main buttons (eg: A/B/X/Y) to select a character. This input method strikes me as one that can be mastered, but it’ll require time.

First impressions? SteamOS can be big. Real big. Despite the issues I’ve encountered, the potential for something amazing is definitely there, and I hope Valve makes it a priority to cater to the most popular requests to help make SteamOS the enabler of the best livingroom experience ever.

Gaming aside, the #1 demand I hear from people is, “It needs to stream my movies”, and second to that, “Will it have Netflix?”. We already know that Valve has plans to add the ability to stream content, but it’s a little unfortunate that no such functionality could be found in this beta. To its favor though, SteamOS was announced less than three months ago, and it’s still a little ways out from launch. There’s still a lot of time to upgrade the OS itself. 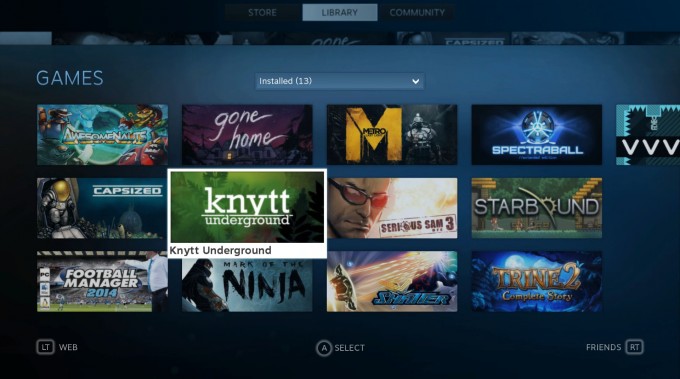 I’m not sure what Valve’s plans are, but I think SteamOS should have a little bit of modularity to allow people to add software packages that Valve itself has no control over (and of course, software it does have control over). That will allow someone to fine-tune their experience, and add functionality Valve didn’t think (or want) to, or that it can’t for one reason for another. Imagine an XBMC plugin, for example. That alone would vastly improve SteamOS’ flexibility.

The desktop experience can of course be improved-upon as well, but as it stands, it’s the SteamOS interface that Valve is most concerned about, which isunderstandable. Still, the sky’s the limit with regards to what we’ll see added before launch, and of course, after launch. Like any other online device, SteamOS can be upgraded as often as Valve sees fit.

As for the beta itself, would I recommend it? If you don’t have a spare PC to test it on, I wouldn’t bother at this point. Even then, my experiences suggest that you might have to do a little bit of troubleshooting, and for the most part, it’s troubleshooting just to get a dedicated Big Picture at this point.

SteamOS is not a viable solution for an HTPC at this point, as there are far too many kinks to work out and some obvious lacking functionality. For all we know, Valve might even require a complete OS reinstall when the final gets here. As it stands, consider SteamOS to be “testing only”. If you are fine with that, I’d definitely recommend giving it a go if you don’t mind getting your hands dirty.