by Rob Williams on September 26, 2016 in Networking

Are you unable to run a cable straight from a router to the intended device? Is a Wi-Fi connection too unreliable? Powerline Ethernet is able to help in both cases. In this quick article, we’re taking a look at TRENDnet’s TPL-421E2K kit. It couldn’t be any easier to set up, and as we find out, it’s super reliable, to boot.

Powerline Ethernet has existed for a while now, but despite that, and despite the amount it could help a potential owner, it feels to me like it’s still an unknown technology. Among my family and friends, none of them heard of powerline Ethernet until I mentioned it to them – and believe me, some of them would benefit from it.

The realization that many people still don’t know of or understand the benefits of powerline Ethernet really hit me a couple of months ago when a family member switched ISPs and, because it was easier, let the technician install the router in an inconvenient location (the only room without a single computing device). While most devices in the household work fine wirelessly, some have the tendency of dying at complete random (notably, a desktop PC that sits the furthest away from the router).

You might be able to see where I’m going with this. Powerline Ethernet can help in situations like this, among others. Don’t want to run a cable along the walls to where it’s needed? Sure, drilling holes is an option, but it’s not an ideal one. For some, it might not be an option at all (apartment-dwellers know this kind of pain). Powerline Ethernet, by contrast, simply plugs into a wall like any other device, with absolutely no modification to a building needed.

Whenever I introduce someone to the concept of powerline Ethernet, there’s an 80% chance I’ll be asked something akin to, “The Internet can work over a powerline?” The answer is of course, “yes” (else this would make for a really odd review). But, just because it works doesn’t mean it’s going to work “well”. I use quotes there because there’s more than one angle to look at this at.

The biggest hit to powerline Ethernet is with the performance. Even if a kit is measured at 500Mbps, there’s almost no chance you’ll see performance anywhere close to that – even in ideal situations. It’s all marketing. TRENDnet calls this kit “Powerline 1200”, which insinuates that it can go even faster than a 1Gbps wired connection. Nope – not going to happen. But, marketing aside (every company does this – not just TRENDnet), even if the performance numbers don’t add up, there’s one good reason to get powerline Ethernet: stability.

It goes without saying that a wired connection is going to be more stable than a wireless one, and nothing changes with powerline Ethernet. Even if the performance is mediocre, the connection is still going to be solid.

Prior to receiving this latest kit from TRENDnet, the TPL-421E2K, I used one of the company’s aging models for about four years, and I can honestly say that in all that time, I never had an issue with it. None, zip, nada, zilch. In that same time, I did have some issues with wireless connections, and even the Internet as a whole, but not the powerline Ethernet. 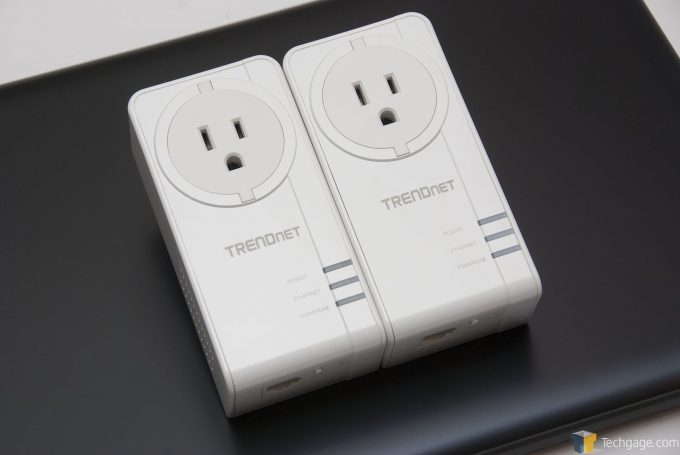 Above, the TPL-421E2K sits atop a notebook that I used in testing. Because no one wants to take up a plug on the wall for another device, TRENDnet includes a plug on this particular powerline kit. That to me is hugely important; I simply wouldn’t want to use a kit that doesn’t have a replacement plug, for what I am sure are obvious reasons. It’s worth the extra few dollars for the plugged versions, in my opinion.

On the front of the adapters are three simple status LEDs: Power, Ethernet, and Powerline. In the shot below, you can easily see the LAN port at the bottom, as well as a “Sync” and reset switch. While “Sync” might sound like it syncs both endpoints together, it’s actually what changes the encryption key, should you feel the need. That’s right: encryption is involved here, so that people can’t somehow intercept the transmission with their own powerline device. 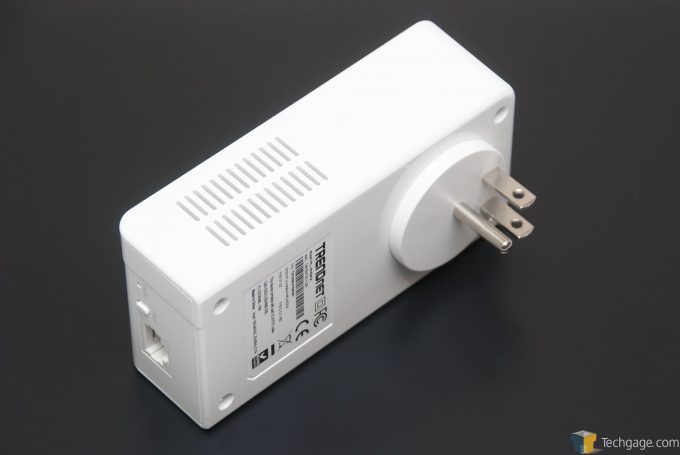 While not pictured, the TPL-421E2K includes two five-foot LAN cables, and… nothing else. “What about software?”, you may ask. I’d retort: “There is none.” I can’t overstate this: setting up the TPL-421E2K requires almost no functioning neurons. You plug an adapter into each endpoint, connect those to their respective PC or router with the included LAN cable, and that’s it.

In the absolute worst case, you might have to take advantage of the “Reset” option to recalibrate the adapters, but that’s not something I had to do. This particular kit worked right off the bat, and the aging kit I have been using was no different when I first set it up (it even kept working after I moved to a new building a couple of years ago).

I mentioned before that powerline Ethernet can have a problem of weak performance, and that’s something else I can’t overstate. Simply put, if you are able to have a true wired connection straight from a device to the router, you should go that route. But if you want to avoid wrapping cables around door frames or pierce them through walls, powerline Ethernet is an option.

The same goes for wireless Internet. If your wireless connection keeps stable, there’s really no reason to go the powerline Ethernet route, unless perhaps the latencies are a bit too high for online gaming. This need isn’t going to be there for everyone; not everyone’s networks (or houses) are built alike.

To me, powerline Ethernet is a true last resort, but it’s only a “resort” because of the performance. Stability-wise, it’s top-rate. As I mentioned above, I’ve been using powerline Ethernet for four years, and have never had an issue to speak of.

But about that performance:

Using Speedtest.net’s bandwidth tester, I hit ~90Mbps on a laptop. On a desktop in another room, that dropped down to 35Mbps, whereas in the livingroom, a PC there breached 130Mbps. Why is it all over the map? I’m not sure – I’m not an electrician nor understand how the wiring works in my walls, but this is a perfect example of why I call powerline Ethernet a last resort.

For real-world performance, I hit between 10~14MB/s throughput depending on the device used (I didn’t test throughput on the ~35Mbps PC). That brings us back to 100Mbps-level connections, when many of us are already wanting more than 1Gbps. 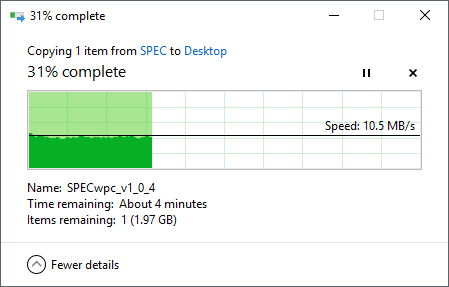 I should stress, though, that even if the network can only move bits at 10MB/s or so, that might not matter to everyone. With a PC-to-PC transfer, that’d be extremely slow, but the fact of the matter is, most people are not going to be moving that much data. For basic Internet browsing, and even gaming, the performance the TPL-421E2K offers is sufficient, and again, it’s stable, which is the most important thing here.

While testing this kit out, I decided to hit up Google and see how others were faring with powerline Ethernet. Conveniently, SmallNetBuilder took a look at this same kit, and in its tests, ~400Mbps was captured at the most ideal point (the other points measured close to my results). This is great proof that your particular housing setup could dramatically impact powerline Ethernet performance, for better or for worse.

If you’ve read through this entire Quick Look, then hopefully by now you will know whether or not you need or want powerline Ethernet. I have no qualm whatsoever in recommending this kit to those who either can’t or don’t want to run a proper wired connection to a certain PC in their house, or if the wireless connections are too spotty or slow.

The latter point is true for me, with the modest laptop I tested. Despite having a fairly fast 802.11n connection, this laptop ran at half the bandwidth on wireless than this powerline Ethernet kit gave me, so all-things-considered, powerline proved to be the better choice.

Ultimately, we’re brought to a simple point: when you’re desperate for a clean, stable connection, it’s good that there are good options like this one – even if the performance isn’t where we’d like to see it. And at $70, powerline Ethernet is not super-expensive to roll out.