AMD’s Ryzen 9 3950X is truly one of the easiest products to sum-up for a conclusion, and it’s not just because we already covered a quick-look in Windows, and an in-depth look in Linux. OK, maybe that does have something to do with it, but so too does the fact that we’ve already been using Zen 2 since the summer, so it’s not hard to get a read on similar chips with more cores.

The fact that this 16-core 3950X exists is this form is simply astounding. We’ve talked about this before, but it never ceases to impress us just how quickly we’ve moved to a generation where eight-core processors don’t seem like a luxury, and even bigger processors are within reach of more people than ever. Intel’s 10-core i9-7900X cost $999 in 2017, and today, AMD’s dramatically quicker 3950X is $750.

Of course, we can’t look at a CPU from such a general standpoint: workloads matter, and as we’ve seen time and time again, not all workloads behave the same from CPU to CPU. While AMD’s Zen 2 has helped the company catch up to Intel in numerous ways, Intel still does have some strengths in specific workloads, and not just those utilizing AVX-512. 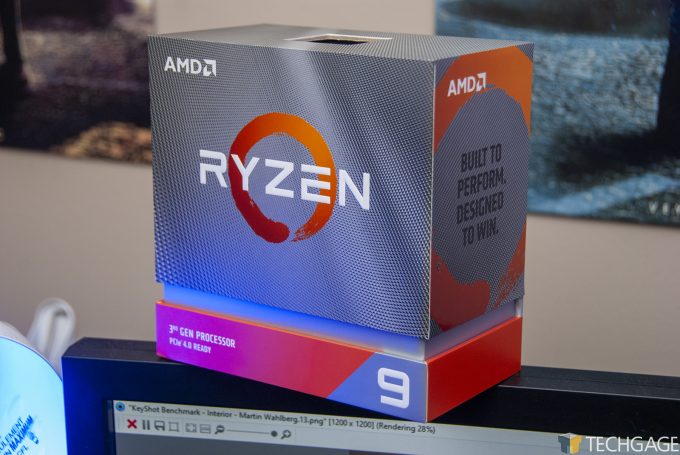 As always, you need to know what your workload actually needs, and then choose the best processor (or graphics card) based on that. With some solutions, like Agisoft’s Metashape, it’s hard to decide on certain gear when different processes use the hardware differently, but generally, it’s not hard to find the most important strengths to you.

That all said, it’s easy to sum up the 3950X as being an amazing processor, and not just because of its completely reasonable price. We saw the 3950X go against the last-gen Threadripper 2950X in every one of the tests here, and rarely did the Threadripper ever come ahead – and when it did, it likely had the quad-channel controller to thank.

Over and over, we saw the 3950X seriously impress us with its gen-over-gen performance gains. In a single generation, AMD went from falling a bit behind in Lightroom to completely overtaking Intel’s crown, thanks hugely to the mass amounts of cache AMD has decided to bless this generation with.

In gaming, Intel is still king with its 9900K series chips, and its i9-9980XE happens to perform quite well, too. In some cases, the performance advantage is noticeable, but only really at 1080p, which means that Intel’s got the esports market locked down with those who truly care about the highest frame rates possible – we’re talking folks who think 144Hz is weak. In many cases, the 3950X performed very well, usually sitting behind only the 9900KS chips.

What struck us as most interesting was the fact that this 16-core processor doesn’t perform worse in gaming than any of the other 3000-series chips. It outperformed even the 3700X, which really highlights the fact that the Zen 2 internal design is a lot more efficient than the original.

Clearly, AMD has a winner with its Ryzen 9 3950X. Whether you need such a big processor should be your main concern. If you’re a creator with heavy CPU needs, you likely already know that you want one. If your workloads are more GPU-focused, you need to evaluate whether that’s where your money should be going – if it comes down to either / or. If you’re still not sure, hit up the comments!

This is one of the most exciting processors we’ve tested in a while, so it easily earns our Editor’s Choice award.