Having designed some of the highest-quality NASes we’ve come across in recent years, Synology is no stranger to the networked storage market. It’s interesting, then, that with as many NAS appliances that the Taiwanese company has released, it’s only just now released a router. As we find out, it’s quite good, too – ideal for the home and business user. In need of a router? You’ll want to check this one out.

I’m not sure if this will surprise anyone, but we’re impressed with the RT1900ac.  We’ve been enamored with the company’s NAS products for years and this router does nothing to change our opinion of Synology or its portfolio.  While there were a few criticisms, they are minor and most can be addressed with updates to the router’s firmware.  This is nothing new and something that we should come to expect more and more.  Hardware is secondary to user experiences.  The true keystone for that is found in software and that’s something that Synology has done well for a long while.

For a while, my own personal gold standard for home routers has been the products from ASUS.  I’ve run a RT-AC66U for a few years now without a single hiccup worth mentioning.  The hardware design has been good enough that the router won’t stick out like a sore thumb, but its strength truly comes from the software that it runs.  Synology has pull alongside ASUS in the race for the industry’s best UI.  Taking a solid look at the industry has allowed Synology to design an operating system for the RT1900ac that caters to power users and beginners alike.  Adding to that experience, Synology has baked into the RT1900ac’s firmware its popular Package Center.  While only five apps are available at the time of publishing, more are assuredly expected. 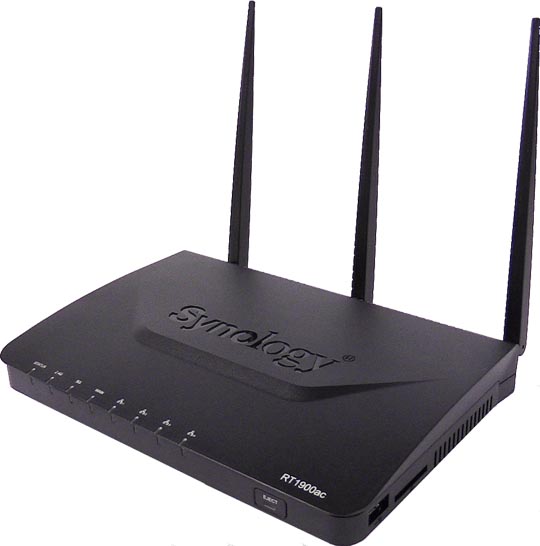 One feature I would like to see in future releases in integration with Synology NAS boxes.  For users that have the RT1900ac and at least one Synology NAS, they’ve already invested in the Synology ecosystem.  Why not reward those users with a single pane of glass where they can administer all of their Synology devices.  Synology’s own CMS (Central Management System) app would benefit from tying into SRM, or allowing SRM to tie into it.  As stated earlier, something like this would easily be doable in the future through an update.

Physically, the RT1900ac would fit into a lineup of today’s popular dual-band routers.  This isn’t a bad thing.  The router looks good in its unassuming design.  That being said, we do have a few issues.  For one, the power cable is comically short.  Unless an outlet or power strip (please use a surge protector) is close by, it will be difficult to get the thing powered on.  All other power cables I’ve dealt with have had at least another foot, often times more, than the cable included with the RT1900ac.  The only other physical complaint is about port placement.  Perhaps it’s because I’ve just gotten used to setting my routers vertically, but I personally like the port orientation on the ASUS AC66U.  All that said, these are minor complaints, and in the grand scheme of this review, they’re non-issues.

No matter how this is viewed, Synology has a winner on its hands.  Not only do we have a router from a company as well-regarded as Synology, but we have for the first time one that can be expanded upon through software.  If past is prologue, we will only see it become more and more refined as time progresses.  With an MSRP of $149.99 at time of publishing, the RT1900ac has been priced to aggressively compete with other AC1900 routers on the market, though it finds itself near the top of the pricing list when considering actual street price.  There is a significant price increase due to preliminary supplies being as short as they are.

Taking everything into consideration, like the excellent build quality along with a stunning first pass at a router UI, the RT1900ac is my top recommendation for anyone in the market for a dual band AC router.