During a meeting with ASUS last week, we were given the run-down of what we can expect to see from the company’s upcoming Z77-based motherboards – and wow, is there a lot to cover. We’re taking a look at features for three particular models here, including the RoG Maximus V GENE, Sabertooth Z77 and P8Z77-V.

At some point within the next two months, Intel is expected to launch a follow-up to last year’s Sandy Bridge processors and motherboard chipsets. Due to NDAs, we’re unable to talk about these two things in any real detail, except to admit they’re en route. What we can talk about are what motherboard vendors are doing with their upcoming offerings.

I had the pleasure of being able to visit ASUS at its North American headquarters in Fremont, California, last week, where I was fed a generous helping of features that are coming to some of the company’s upcoming motherboards designed for “3rd generation Intel Core processors”.

More often than not, we’ll wait until we publish actual reviews before we talk about features coming to certain motherboards, but because there was so much information presented to us during this meeting, I’ve decided to feature an article around all of what I can remember, and then reference this article in our upcoming reviews.

The main three motherboards we were shown during our meeting included the Republic of Gamers Maximus V GENE, Sabertooth Z77 and P8Z77-V, and those are what we will focus on here, starting with the Maximus.

ASUS’ flagship motherboard series for gamers, overclockers and enthusiasts in general, is Republic of Gamers. This series has long been the spearhead for cutting-edge features that in time, trickle down into the “regular” models. During our meeting, we were told that while many people find RoG boards a wee bit expensive, it’s these boards that make future innovation possible. So if you buy one, you can give yourself a pat on the back. 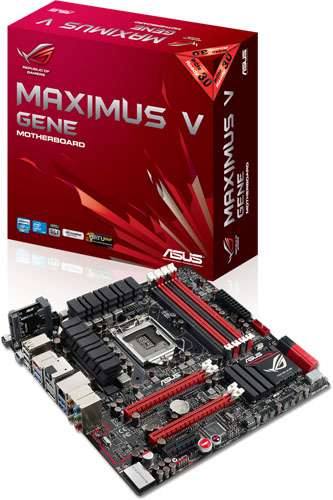 All RoG board launches in the past have seen an ATX product released first, but for the first time, it’ll be the mATX GENE board that hits the channel first for this generation. The reason for this is that the ATX variant is requiring a bit more time for the sake of refining certain features – ASUS doesn’t want to jump the gun and regret it later. 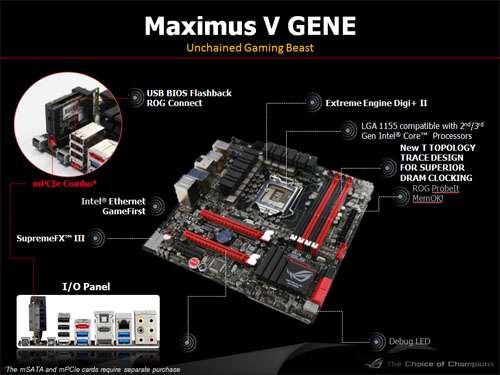 ASUS targets the GENE at those looking for a minimum size but maximum features. It’s optimized for LAN gaming and despite its small size, “no compromise” overclocking. In the past couple of generations, we saw ASUS roll-out a “USB BIOS Flashback” feature that allows you to update your BIOS without a CPU installed, and that makes a return with RoG here. In addition, the company’s preference for Intel LAN also makes itself seen – not only on RoG though, but across most of the company’s next-generation line-up.

For all of ASUS’ upcoming motherboards featuring Intel’s next chipset, the company has implemented a new trace design around the board’s DIMM slots, to both improve performance and overclocking. Adjusting the traces might sound simple enough, but according to ASUS it was quite a challenge, but one that the company is glad to have succeeded in. It’s not quite clear if we’ll see actual bandwidth improvements because of this improved trace design, but we were told that it’s likely that there will in fact be a minor improvement.

Also found here is an updated SupremeFX III audio chip, which we were told is the best on-board solution to date. ASUS refuses to call these custom solutions “Xonar”, as nothing compares to discrete audio. To help meld the two divides, however, ASUS separates its audio solution on RoG boards to isolate it from the rest of the board, aiming to deliver the best performance and quality possible. If you hold an upcoming RoG board to the light, you can see an outline around the “card”. 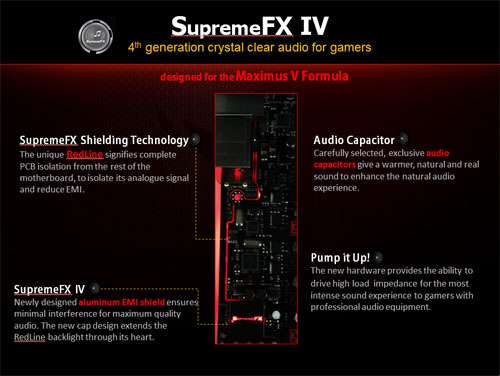 A first for RoG is the inclusion of an mPCIe Combo card, which by default is not installed. With this card, you will be able to install an mSATA SSD or some other mPCIe device, such as a wireless or Bluetooth card. Have no need for either? The combo card can be kept in the box. 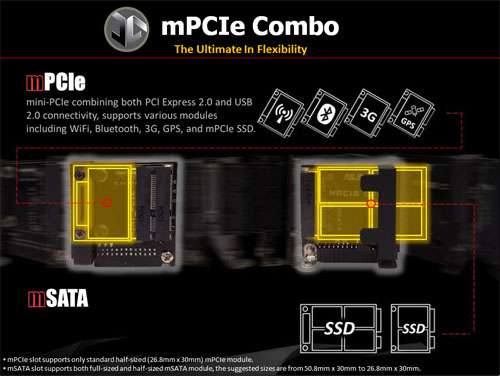 In 2007, ASUS unveiled a water-cooling solution that was designed to keep the motherboard chipset and PWM area as cool as possible. The solution was robust, and some might have even considered it to be too much, in terms of size. For 2012, this solution has been reinvented on the ATX board, while a similar non-water cooling version will be available on the mATX variant. 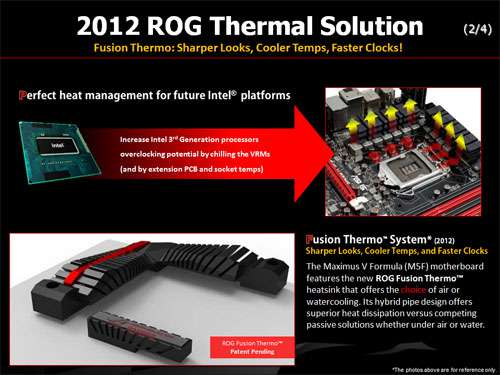 The heatsink is long, and built with a 90 degree angle to completely cover the motherboard’s PWM area. An in-tube is meant to be installed at the bottom, while the out-tube is installed at the top (though it might not truly matter). If you don’t have water, the heatsink alone will still improve temperatures better than before. With water however, you can expect a drop in temperatures of about 20°C at various points around the PWM.

There’s more to be seen from RoG next-generation Intel Chipset boards once launched, but the features mentioned above are the ones that stand out to me the most.