With its upcoming 10.2 and 10.3 Catalyst graphics drivers, AMD is making sure it goes well beyond the hardware to deliver the ultimate PC experience, whether or not it includes gaming. We’re taking a look at all of the features on the horizon, including game profiles, CrossFireX and Eyefinity improvements, mobile drivers and more.

With a slew of GPU releases behind us, and NVIDIA’s Fermi right around the corner, what better time than now for AMD to strut its stuff where its ATI Catalyst drivers are concerned? Late last week, the company held a phone briefing to go over the intricate details of both its Catalyst 10.2 and 10.3 drivers, and afterward, I had a clear understanding of why it chose to stress these two releases. There’s some good stuff on the way.

The two upcoming Catalyst releases is what AMD is calling the “1-2 punch”, because while 10.2 will be introducing some worthwhile features, 10.3 will further those and introduce even more.

Because the drivers we received were pre-release, we didn’t devote too much time and effort to testing, so in today’s article, we’ll relay the information we were given during last week’s phone briefing.

While AMD prides itself on being able to release regular graphics drivers, 12 a year, it noted that there is an inherent issue with having only that number. The main bullet-point boiled down to the fact that PC games get released far more often than 12 times a year, which means that upon their launch, chances are good that the game isn’t optimized in the currently-available Catalyst driver. The solution? Profiles.

Beginning in 10.2, Catalyst will be able to take advantage of non-editable XML-based profiles which the company itself will host on its servers. Rather than require users to download a completely new graphics driver, upon a game’s release, AMD plans to have profiles immediately available on its website. For the best in performance, it’s always recommended to update your graphics driver, but as we see it, this is an ideal solution for the down-time in between each Catalyst release. I’d also like to add, “It’s about time.”, because this is an idea I would have loved to have seen ages ago. 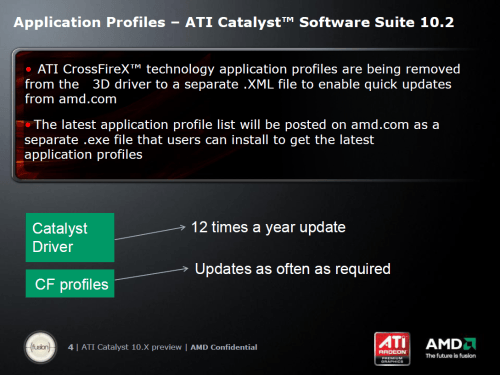 As a quick example of the process, imagine that when Supreme Commander 2 becomes available in a couple of weeks, there’s either a problem graphically on ATI cards, or AMD found optimizations that could greatly improve the performance. To remedy the issue, you’d simply head on over to http://game.amd.com/ and download the latest profile updates. The latest updates will be found as an .exe file.

While I love this move AMD is making, I do wish that the profiles were updateable through the Catalyst Control Center itself. I’m sure that’s an idea that’s en route, but to play it safe, AMD is sticking to the .exe’s for the time-being. You might also wonder why the company is making the profiles non-editable, and the reason given by AMD’s Manager of Catalyst Product Management, Terry Makedon, is that there simply won’t be a need.

A more elaborate reason is that the profiles to come out of AMD are designed to be perfect, therefore, it could be assumed that no further improvement could be made. So in that sense, there’s little reason to allow users the ability to edit a profile and end up causing more harm than good. If there’s one question that remains, it’s just how many games will have profiles, and how many of the lesser-known titles won’t receive an optimization. If I had to guess, there shouldn’t be any problems with how AMD is choosing to do things, and if anything, it’s going to be something users are hugely going to appreciate down the road.

Having multiple graphics cards in your PC is without question one of the best ways to get incredible performance for any of today’s games, but it’s also a sure-fire way to increase your power bill. The reason is because the second graphics card doesn’t idle well when simply browsing the Web or doing virtually anything that doesn’t require 3D acceleration. 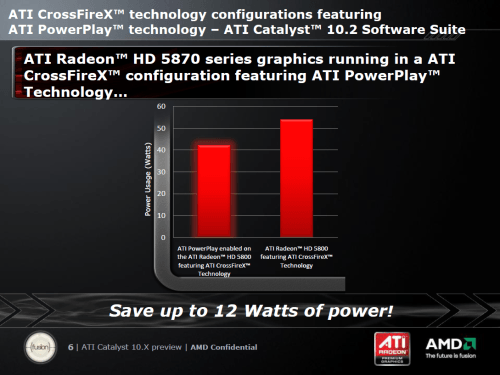 Catalyst 10.2 is going to improve this situation, however, by unlocking a low power mode for the alternate GPU that automatically decreases clocks along with voltage. Each configuration will be different, but AMD estimates that for a configuration with two HD 5870’s, the power savings will be around 12W. This isn’t exactly incredible, but the power consumption in AMD’s HD 5000-series is superb as is, so this only improves things even further.

Regardless of what the haters say, multi-monitor technologies, especially Eyefinity, are unbelievably cool, and have the ability to really immerse you in your gameplay. On a modest GPU, the problem of multi-monitor gaming becomes clear… the need for more performance. When Eyefinity was first made available with the HD 5000-series launch, CrossFireX was not supported. It now is, which is sure to put a huge smile on high-end gamers that have huge monitors to put to good use.

Although there is no end-user scenario at the current time for this particular “feature”, AMD mentioned that it has completely re-tooled the multi-GPU code, and the result from a visible stand-point will be added files to the Catalyst install folder. The company is also working to have common algorithms for both Direct3D and OpenGL for all of its graphics products, and in the future, special combinations of IGP/discrete GPUs should be made possible.

Finally, another 10.2 feature that could be appreciated for all DisplayPort users is that the driver will begin supporting audio. So if your monitor happens to have speakers built-in, you’ll be all set.

With NVIDIA pushing 3D so hard with its 3D Vision kit, it seems kind of strange that AMD has kept so quiet about its own support over the past year. Although it has nothing solid in the pipeline in terms of game support (that’s up to the game developers), 10.3 will begin supporting stereoscopic 3D in both a normal mode, which is 60Hz to each eye (like 3D Vision) and also 240Hz, which is where four images at 60Hz are displayed total, two to each eye, with an offset.

Beginning in 10.3, AMD is going to offer an intuitive bezel compensation tool that will greatly improve your gaming experience regardless of how large or thin your bezels are. During the test, a 90°C right angle triangle is displayed and is spread across your displays. Because the angle continues from one monitor to the next, you can easily adjust it and apply it when it looks even. When using Eyefinity from that point forward, the driver will use the same setting you applied, which should give you the best possible experience. 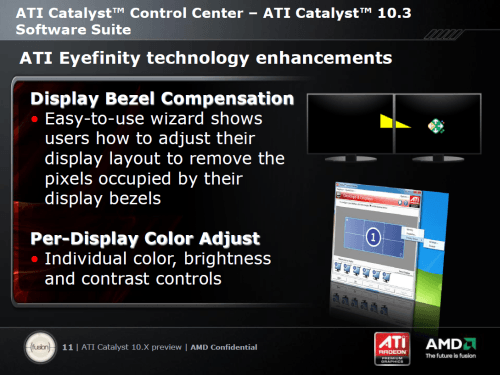 For those who might have different monitors in their configuration, or simply want each monitor configured a bit different than another, per-display color adjust is another new feature coming up in 10.3. It does just as it sounds, allowing you to change the color, brightness and contrast for any of your installed monitors, completely independent of one another.

Also introduced will be groups, where you can create different profiles, so to speak, for various configurations you may want to use on a regular basis. There’s really not much that can be said about this. Finally, display switching will also be improved, allowing the user to quickly switch between extended and cloned modes with a simple hotkey.

If you’re an enthusiast who happens to own a notebook, then there’s little question that you understand the frustration behind updating your graphics driver. Most often, the notebook vendor’s website will have some year-old driver that happens to be the exact same one you’re already using, and scouring the Web for other options will prove to be nothing but a brutal experience (I’ve been there numerous times). 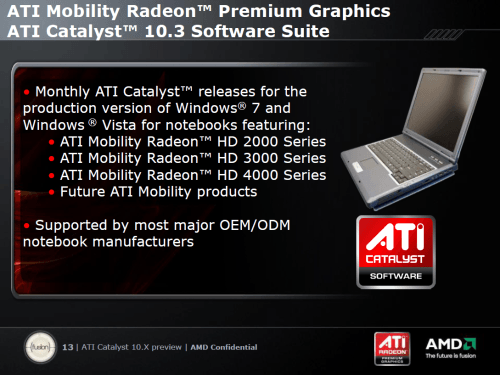 Beginning in 10.3, mobile drivers releases will follow the same monthly schedule as the desktop drivers, and will install just fine on any supported notebook. What’s a supported notebook? If a company hasn’t explicitly denied AMD the ability to support that notebook, then it will be supported. So, from the get-go, all notebooks should be supported fine, aside from those from companies who have already opted out. Currently, these companies include Panasonic, Toshiba and Sony, which happen to be three companies I’d recommend boycotting until each one clues into the fact that this is a good thing for both company and consumer.

When AMD called for a press briefing for its upcoming Catalyst drivers, I knew that something good was going to have to come from it, because after all… a press briefing for a graphics driver? I can honestly say that I love what AMD announced during the briefing though, and I look forward to seeing the final 10.2 and 10.3 driver releases.

From the profiles to Eyefinity to mobile support and beyond, AMD has clearly shown that it plans on going well beyond the hardware in order to deliver the best experience possible. These two upcoming releases take care of pretty much every type of consumer out there, from the high-end gamer, the regular gamer, the non-gamer, the mobile user, and so forth. It’s great to see. If you’re an ATI user, you definitely have something to look forward to over the next couple of months.