As is common with each new 3DMark release, Futuremark has adjusted the default resolution in each profile for the sake of relevance. The “Entry” profile benchmarks at 1024×600, so it’s in all regards useless. The “Performance” profile, which utilized a resolution of 1280×1024 in Vantage, has been dropped down to 1280×720 to suit the 16:9 aspect ratio. The same drop has happened to “Extreme”, which now benchmarks at 1920×1080.

I am of the belief that testing today’s graphics cards at a resolution such as 1280×720 is pointless, as we have a hard enough time pushing a resolution like 1680×1050 sometimes even with modest offerings. Despite that, we will still be running it for our tests as it’s the only option available to users of the free version. It’d make less sense for us to limit the comparisons our readers can make.

For the sake of not littering up this page with our methodology and system specs, I’ll instead link to a recent GPU review where it’s all listed in detail. The testing machine hasn’t changed for this article, as we’ll be implementing the results seen here into our GPU reviews going forward. 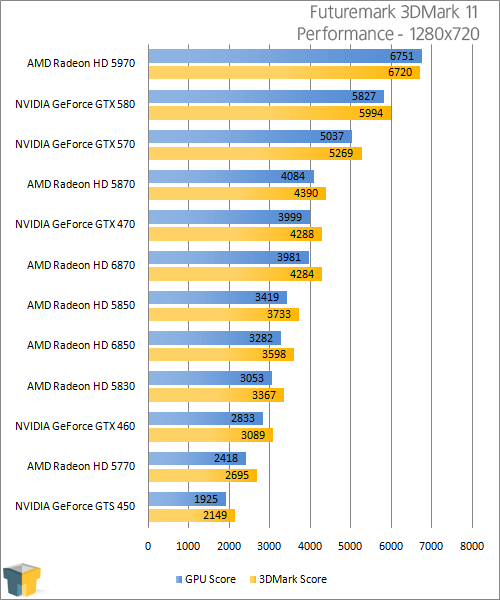 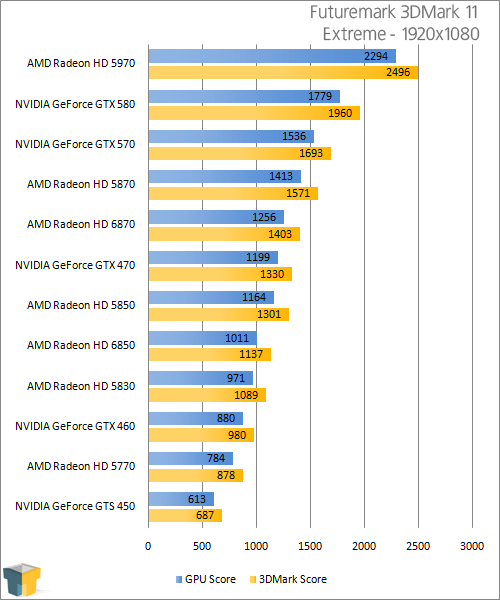 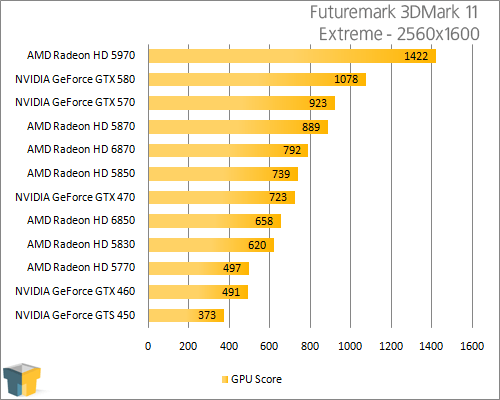 It’s clear that 3DMark 11, with its brute-force graphics techniques and adjusted scoring algorithms, will deliver results much lower than what we’ve seen with Vantage. While AMD’s Radeon HD 5970 scored over 13,000 in the Extreme test in Vantage, is scored a measly 2294 at the similar setting here. No complaints… but it will be fun to see who can hit 10,000 first at the Extreme setting!

Overall, 3DMark 11 looks to be a great successor to Vantage, although it does seem a bit lighter in overall testing. Futuremark cut off some excess, but even so, the overall package is nice. If I did have one recommendation, it’s that I’d love to see the GPU and CPU scores right along the 3DMark score on the result page. It’d be far, far more convenient.

If you decide to give 3DMark 11 a go for yourself, why not talk about your experiences and thoughts in our related thread?