With the release of Valve’s Steam client for the Mac last week, Apple gamers all over found themselves with renewed hope that their gaming lives were about to get a lot better. We’ve been using the client since launch and have lots to say about it, so join us in figuring out if Valve’s latest release has lived up to all the hype.

Here at Techgage, I’m the lone Mac lover. I guess that some days, it’s pretty easy to see why – Apple, and Steve Jobs in particular, doesn’t always do a lot to ingratiate itself with the public at large. Choosing a Mac over PC is very much a black and white thing – either you get it, or you don’t. Those of us who make the plunge almost always have a particular itch that only OS X or even the overpriced hardware (8-bit laptop displays, anyone?) can scratch. You know, fripparies like stability!

All joking aside, we who use Apple as our day-to-day OS have often been disappointed, shall we say, with our game selection. It’s almost as if people consider gaming on the Mac to be a waste of precious and fashionable CPU cycles. I’m sure it has much more to do with the low percentage of Mac users vs. PCs, along with cost-benefit calculations, etc. Whatever the cause though, it’s been a frustrating path to say the least. I went from having every game at my disposal to nearly nothing when I made the switch, and situations haven’t really improved even with the Intel chips or other “Oh good, now we can game!” hardware and driver decisions.

Finally, though, there is a light at the end of the tunnel – and this one isn’t an oncoming train. Valve, the wonderful maker of Half-Life and Half-Life 2, has finally brought its Steam games platform to Mac. With all the beauty that Steam has brought to PC gaming over the last five or so years, this is great news indeed. But is it going to finally turn the Mac into a gaming powerhouse? 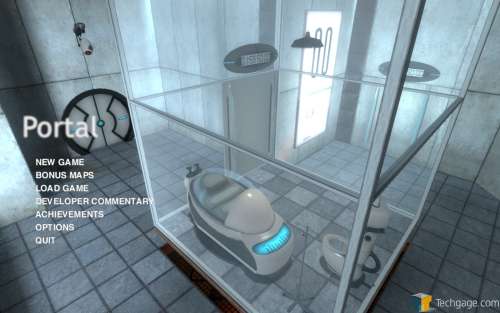 I’ve been using the platform for about a week now, testing the in’s and out’s… and I’m ready to give my thoughts on it.

Before we can begin talking about Steam itself, you need to make sure your machine meets the basic requirements – most any Mac bought in the last three to four years will. It requires an Intel-based processor and OS X 10.5.8 or later for Leopard users, or 10.6.3 or later for Snow Leopard. The client does NOT require a discrete graphics card, though obviously one is recommended and will help your performance in many titles. Those with an IGP need not lose heart, though – a lot of smaller Pop-Cap style games are also available to steal your productivity that don’t require anything fancy.

You’ll also need an active Internet connection, and Valve heartily recommends a two-button mouse. We’ll get into some of that later, but let’s just say it’s a really good idea (though personally I don’t use one).

I’m installing Steam on a circa 2008 15″ MacBook Pro, with a P8600 2.4GHz Core 2 Duo and an NVIDIA Geforce 8600M. The MacBook runs Snow Leopard, patched to the latest version as of the publishing of this article.

The Steam client for Mac can be grabbed right off of the Steam website, and comes to you in the form of a neat little 3MB .DMG file. Just like typical Mac software, all that’s needed is to drag the logo onto the Applications folder and you’re ready to go… sort of.

Once you open Steam for the first time, the real download begins – on my machine, it brought down another nearly 70MB before it was actually ready to launch. At present, it seems that the client updates itself but not your installed games, which we’ll cover in a minute. When the download finishes and Steam has padded itself up to the around 75MB mark, you’re ready to enter your account name and password (or set up a new account). Both processes will be instantly familiar to Steam PC users, and are straightforward for new users on the Mac.

When Steam has finally loaded, you’re greeted with – drum roll, please – exactly the same GUI as a Windows user has. There is even a little button under the “Store” that is simply labeled “Mac”, as if it were just a feature tacked on to the end instead of a release unto itself. That’s really quite fine, particularly given that the storefront is designed for all Steam users. However, it’s worth noting here that aside from the application menu being moved up to the OS X title bar (like pretty much every other Mac app), you’re looking at the exact same screen with the exact same commands. 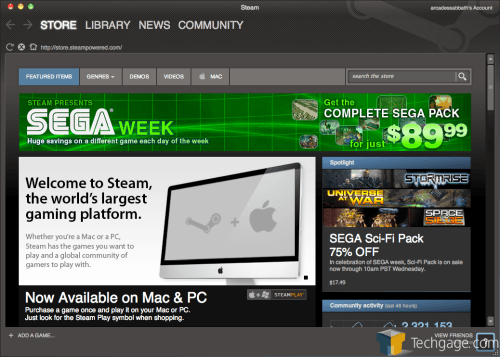 Here is where I reach my main argument with the actual Steam client itself – it was written with Windows in mind, where right-click is an expected feature. Now, I don’t agree with the Apple decision to forever thwart me in my pursuit of a right mouse button, but it is what it is. There is only one button. Ergo, things that REQUIRE a second (or third) mouse button are not only minorly frustrating, but obnoxious UI bugs as far as I’m concerned. Here’s to hoping that they eventually weed that out in an update soon.

Further adding to this frustration is the amount of right-clicking that is needed to perform useful tasks in Steam, such as updating games that are available in your Library. And again, there is an interface “falling down” – there is no tool-tip, no helpful little guide to TELL you that you need to do that, you just need to know. That may be fine on Windows (where I believe a tool-tip is displayed anyhow), but Mac users do not expect a right-click.

Aside from the right-click debacle, Steam’s features are the same as its Windows counterpart. The storefront allows easy and attractive access to new content, which will be covered momentarily. It also does a great job of letting you know about upcoming or presently available sales and packages, including the new “Steam Play” game feature.

“Steam Play” is a great boon for users of both PC and Mac, because a game purchased on either platform will work on both. This means people transitioning from one system to the other either day-to-day or permanently will keep their games (and ability to play them). Currently it’s available for all “newer” titles on the Mac, and I expect that it will be offered on most new content that is added over time – as long as the game is also available on the PC, of course. 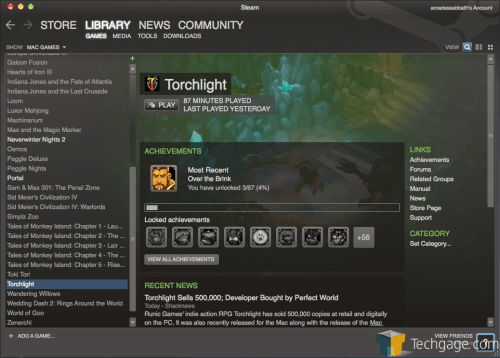 The Library on Steam allows you to see games that are currently linked to your account. Just like on the PC version, you can choose to add non-Steam games to create a one-stop hub for your gaming needs. I’ve not made much use of this feature in the past, but I’m sure it’s of some use to people since it has never been removed.

The other main feature that users will look for is the Community, and it’s present as always. It’s worth noting that in order to make much use of these features with the in-game overlays that happen on PC, that you’ll need to turn on the Accessibility Services in your computer’s settings. For those who wouldn’t know how to do this, don’t worry – the process is almost entirely automated for you. When prompted, just click the link!

The News section works as expected, and there’s really not too much to say about it. It is nice to see though that new content is being promised to make the transition to Mac (a few games at a time) every Wednesday for a while. In fact, the release of this article happens to coincide with the first major influx of new titles.

Speaking of content, let’s get into that now. After all, Steam is the vehicle for one thing – Games.