I haven’t had a chance to put in the time with a full-fledged UEFI but I’m left with a ho-hum feeling about TouchBIOS.

The layout is fairly clean and allows for switching between various sections without a lot of back and forth between the home screen and sub-screens thanks to the tabs on the left. The major complaint that I read about while researching TouchBIOS was that the icons on the home screen were not labeled. On the version that I downloaded they were, so it looks like GIGABYTE was listening.

The screen capture ability is nice for those who like to share their settings or need help with an overclock, however I do not see any way to resize the interface to allow more information to be shown. Nearly all screen captures were taken using the built-in option so you can see just how much information is displayed. Making the interface resizable or even providing various preset resolutions would be a great feature to include in later versions.

Having touchscreen support is also a cool feature, even if it is one that fills a very small niche. I don’t know of anybody who has a touch capable monitor that would need to use this application but maybe someone out there will fall in love with the ability to support their hardware.

There are some serious kinks to work out of the system with regards to overclocking, though. That would be the option that I would be using the most so it is a big issue to me. Until these can be resolved I would personally stick to using the standard BIOS for everything at this point. 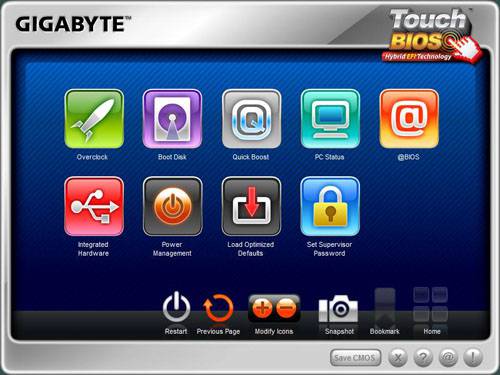 Also, having to boot into your OS is not always an option based on what settings were changed, so users may end up having to access the standard BIOS to undo a change whether they like it or not. That brings up another point with regards to restarting. When restarting after making changes in the BIOS, only the motherboard is accessed, so speed is out of our control. Restarting from within the operating system means that overall system speed affects how quickly users can be loaded back in.

What I find odd is that GIGABYTE chose to only provide TouchBIOS support on the Z68 chipset at this time. I read a while back that all 6-series based motherboards have the capacity to handle a dedicated UEFI should one be released. Rob spoke with GIGABYTE about the lack of current full-fledged UEFI support and was told that the company had some initial concerns about launching one now but plan to have one ready for the next platform release – likely the high-end X79, LGA 2011-based enthusiast platform.

Maybe one day my dream will come true with all system changes being made on the fly from within the operating system. Milk and honey will flow freely, unicorns will high-five ninjas and life will be good. Until then, I’ll be sticking to the BIOS until improvements are made.

To see if I could replicate the issues Ryan experienced with regards to overclocking, I loaded up one of our testbeds equipped with GIGABYTE’s Z68X-UD3H-B3 and installed the latest version of TouchBIOS. For the most part, my personal thoughts mimic Ryan’s to a T, although I did have a little more success with the overclocking functionality. If I increased a ratio or the BCLK, then rebooted, the settings I chose stuck.

I did encounter other lesser-important bugs, however. Inside the overclocking section, TouchBIOS read my CPU frequency and BCLK both as 0MHz, though it seemed to read all of the other data just fine. At this point in time, TouchBIOS seems to be hit-or-miss with overclocking, with users being able to experience different bugs depending on… we’re not sure.

Before loading TouchBIOS up for the first time, I had wanted to like it… but I just couldn’t. The interface is too small, and navigation just isn’t as smooth as it could be. Upon entering a section, it can take upwards of 3 or 4 seconds for the respective information to load. This is most noticeable with the PC Health section, as the main portion of the application is left blank until the information is all loaded.

I don’t discredit TouchBIOS’ goals, but there is a lot of work that needs to be done. The program as a whole should load data faster, be easier to navigate and of most importance, be resizeable. In a video where GIGABYTE showed off TouchBIOS, a touchscreen was used with the tool running in full-screen mode. For a true EFI experience, that feature needs to be brought to the consumer version, because on a large resolution (1920×1080 or higher), it can become a chore to look at after awhile.