by Rob Williams on September 8, 2011 in Software

We’re in the off-season for big distro releases, but that hasn’t stopped Mandriva from releasing one of its most interesting variants to date. In a bold move to an exclusive KDE desktop, Mandriva 2011 looks to simplify its development and give people a straight-forward and highly polished offering. Let’s check it out.

Mandriva, one of Linux’s oldest distributions, saw its latest release come out in late August, dubbed “2011”. With it came a couple of major changes and a renewed focus, much to the chagrin of some fans. The reason is that with 2011, Mandriva becomes more like Windows and OS X in that the developers are focusing on a single desktop experience – in this case, KDE.

This is where the renewed focus comes in. Rather than spread the development team thin by supporting multiple desktop environments, Mandriva is trying to offer a more streamlined, simple experience. When someone sits down to a Windows PC, they pretty-well know what to expect. With most Linux distros, that’s not the case, as there are at least five common desktop environments that distro developers will choose from. With Mandriva 2011 though, the experience for most users should be about the same, and thus the developers can focus on making sure the experience it offers its users is the best out there.

Given this, it’d be a bit silly if KDE on Mandriva 2011 looked like KDE on every other Linux distro, and for that reason, it doesn’t. To help polish this release, Mandriva teamed up with Russian UI and usability specialist ROSA Lab to perform a KDE overhaul to deliver an experience unlike any other. At the same time, the result is one of the cleanest themes Linux has to offer: 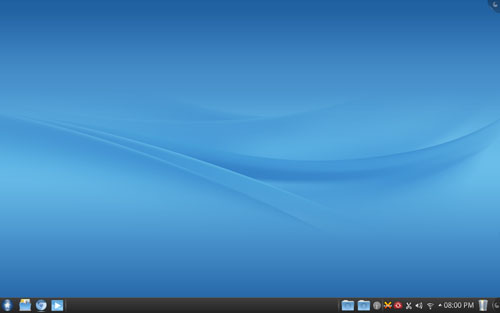 On the surface, this doesn’t look like much of an overhaul at all, but that’s because most of the features that ROSA introduced can’t be seen without using the desktop. Included in the experience is a special KDM theme that looks quite good overall (pictured here). Past that, there’s a special menu system that replaces the traditional one found in KDE called “SimpleWelcome”. It’s a full-screen menu of sorts that somewhat mimics GNOME 3 or Unity.

The taskbar has also been replaced, with an applet called RocketBar. It features similar functionality as the traditional KDE taskbar, but it introduces the ability, like GNOME 3 and Unity once again (but first in Windows 7), to click on an application shortcut in the taskbar and have that become the open application. This saves space and makes it so that you always know where an open application is.

Other minor adjustments affect Dolphin, which sees a simplified look overall, and StackFolder, a folder in the taskbar that can be clicked to store files or folders that you’d like quick access to. 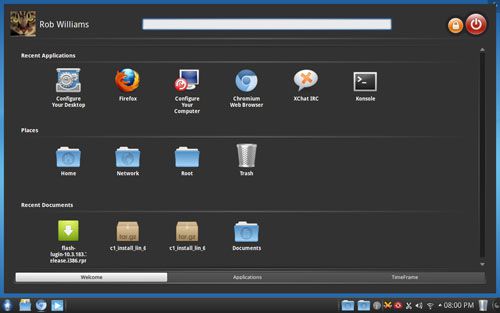 Kind of slaps you in the face, doesn’t it? Much like GNOME 3’s menu, this one takes up the entire screen, which is something I’m not a personal fan of. It’s comprised of three sections; Welcome (recent programs/documents), Applications (system-wide list) and TimeFrame (search for files via time, not only name).

This menu will take a bit of getting used to, and I don’t find the scroll-wheel acceleration is ideal for scrolling down the list of applications, but overall this is a polished offering. It offers no customization options that I can see, however, which is rather unfortunate (and sadly becoming a theme for 1.0 launches of new desktops lately). After a bit of use, I do like this implementation of the menu more than GNOME 3 or Unity, but I still much prefer KDE’s kick-off menu (which can replace this one should you prefer it).

The “TimeFrame” feature of this menu is the most interesting aspect of it, as it allows you to search documents based on time, not name alone. So if you saved an edited photo two weeks ago but don’t remember what you called it, this tool should help you figure out where it is. This to me is an awesome feature, and one I wish I had with my own personal KDE rig. 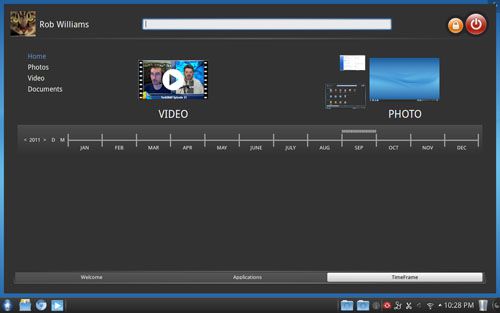 Overall, I have to admit that I like what ROSA has done here. I don’t like the massive menu, but fortunately anyone is free to replace it with the old-school KMenu or the kick-off menu, as the applets still exist. The level of polish is quite nice though, and as this is the first release, we can hope to see further improvements and the introduction of tweaking options in future releases.

Much like openSUSE, Mandriva’s focus is ease-of-use – making sure that the desktop experience is a smooth one from the install to regular use. It ships with its own control center that’s simple to use and handles most of the system configuration, again, much like openSUSE and its YaST. Mandriva’s take on things is a bit easier to use, but it also seems to lack the depth that YaST offers. 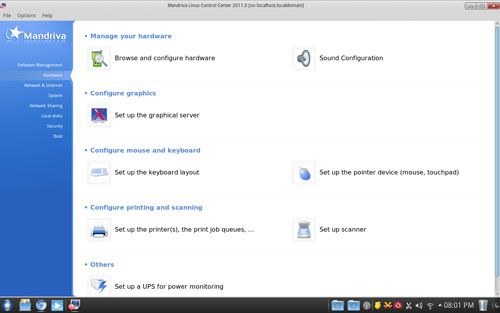 Interestingly, in order to get graphics acceleration, I had to click the “Set up the graphical server” option here, at which point Mandriva discovered my notebook’s GPU and then configured it. Again, this Control Center isn’t the most in-depth out there, but it does allow you quick access to network configuration and sharing, security options, software management, users, date and time, system logs and so forth. Everything is displayed in a simple manner, which is somewhat refreshing.

It’s been ages since I last used Mandriva (2004, to be exact), so I forgot all about what made the distro unique. One thing is its installer, or at least now it is, and also its robust package manager. With so many distros today using the same installer, I was a bit taken when I saw something completely different here.

Upon booting the DVD, you will have the option to use the live enviroment or go straight to the installer. You will not be able to install from the live environment. The installer isn’t exactly pretty. It’s just a black background and a small dialog box. It is however rather simple to use, and I didn’t run into a single hiccup. Here’s a shot of the included partitioner (seen inside a VM, which is not where Mandriva was tested for this article): 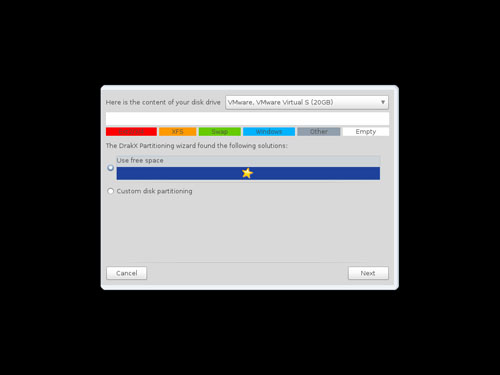 The entire install process took about 10 minutes, and was seamless overall. GRUB 2 is the boot-loader of choice here, and Mandriva will automatically add other installed OSes and allow you to name them accordingly.

Post-install, the first thing I ever do is something I’m sure a lot of people do – install applications. As I was completely unfamiliar with how Mandriva worked, this is where I hit a roadblock. Typing any common application into the repository, such as Bluefish, GIMP, FileZilla and others revealed no results at all. Confused, I did the first thing most geeks resort to: go to Google.

After some searching I discovered that not all of the repositories are enabled by default (you need to go into the ‘Configure media sources for install and update’, then click on ‘Add’ and then ‘Full set of sources’), and after enabling them, all was resolved. I couldn’t figure out from searching exactly why most of the repos are disabled by default, and since a lot of them are free (as in libre), my theories were ruled out. 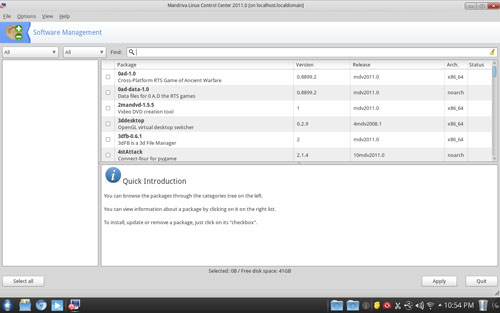 Mandriva’s package manager overall is simple to use, and isn’t far different from solutions included in many distros. There does seem to be a lack of groups however, and so most things will need to be searched. Also, it’s clear that Mandriva doesn’t keep a local repo stored, so you can expect to wait for repo syncs to occur every so often (which is maddening, in my opinion). A local solution such as plaintext or SQL would be much faster, but this solution is cleaner.

Aside from that, one system-related issue I encountered was that the included theme isn’t Compiz-compatible, because as soon as I enabled something like Wobbly Windows or Magic Lamp, a much uglier (to me) theme replaced the one seen above. Strangely, that replacement theme seems to be the primary one the ROSA kit includes, as it’s featured on the company’s website here. Details are minimal on the whys and whats.

Usage aside, Mandriva made a fair number of other changes with 2011. A move to the systemd init daemon has been made, along with a move to RPM5 (I admit I am not sure of the singificance of this). The Xorg server has been updated to 1.10.3 and the system kernel is the six-month-old 2.6.38, but replete with current patches. KDE remains on the last official release, 4.6.5.

LibreOffice has replaced OpenOffice.org, Firefox remains the default browser, Thunderbird replaces KMail as the default mail client, and Clementine (a personal favorite of mine for both Windows and Linux) replaces the player that inspired it, Amarok.

Overall, I quite like what Mandriva brings to the table, and I was a bit surprised by what I saw. I wasn’t expecting to see KDE with an overhaul like this, and the implementation is quite nice. It’s not for everyone, but luckily if you are a KDE user and don’t like ROSA’s tweaks, you can revert absolutely everything, thanks to the fact that KDE is entirely widget-based.

Mandriva 2011 is a solid release overall, and I am quite interested to see where things stand in a year with the next release.

As the title of this article suggests, this was a mere “quick look” rather than our usual in-depth look, so for more perspectives, I’d recommend checking out the reviews from DistroWatch and also Linux Action Show.