Since I didn’t have a window in this case, in the example, I show the case without the side on, and the 92mm lying on the bottom, since there was no spot for it. As you can see though, it gives off a great glow. As for the airflow, I was very impressed with it as well. You could ‘really’ feel the air blowing strong, and it felt as though it was faster than the 2500RPM that they claim it goes. 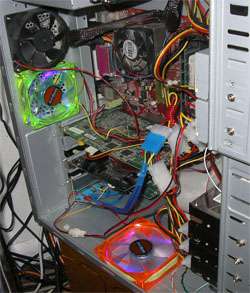 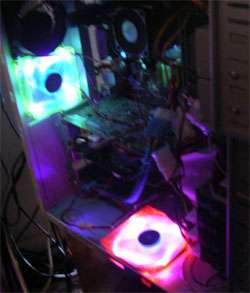 Lastly, I wanted to see how loud the fans were compared to before. They ended up being very quiet, even though they are so fast. It’s definitely audible, but it’s a mild hum, just like it was with stock.

As good as the Blackfire4 fans look, it doesn’t necessarily mean they cooler better than stock. To test this, I originally used the stock fans I had, and ran a few rounds of Counter-Strike: Source, and then took the Max and Min temps from Motherboard Monitor. Once I installed the Blackfire4’s, which replaced the Stock fans, I did the same tests, and outputted those figures as well. 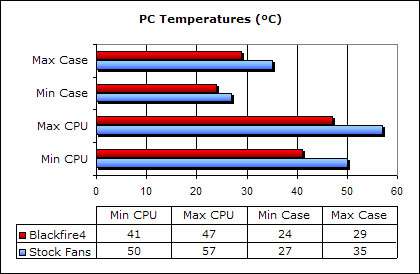 I think that the figures speak for themselves. Overall, the Blackfire beat out the Stock fans, by a very nice margin. Max CPU went from 57°, to 47°, which is a very healthy decline.

There’s no reason to not like these fans, and AC Ryan get’s our 10/10 score once again. How can something be THAT good you say? Well, the fans may be a simple idea, but they do exactly as promised, and does it well. Considering there were no installation problems, or any other problems really, then there’s no reason it doesn’t deserve a perfect score. Thanks to Mike from AC Ryan for threatening to put my fingers in the fans if I didn’t review them!

Feel free to discuss this review in our forums! (Free registration, no spam)