AC Ryan was once known as a company to produce many different products used to spice up your PC, but well over a year ago, it launched its Playon!HD media player series, and recently, those players became available in the US. We’re taking a look at the “mini” edition of the series, and see how it compares to the competition.

Over the course of the past month, we’ve taken a look at both ASUS’ O!Play Air and Western Digital’s WD TV Live Plus media players, and judging by the sheer number of these things available on the market, I’d say we’re likely to be just getting started.

Even after I posted the O!Play review, I didn’t realize right away just how many different spins there were on these set-top media players, and it feels like I discover a new one every day. Even companies you’d never expect to produce such a product, such as AC Ryan, are, and after taking a look at a handful of models so far, I can understand why.

For those who might not grasp the purpose of a set-top media player, they’re in essence a way for you to watch or view your media files on any display, not just the display that’s connected to your PC or HTPC. With them, you can copy files to USB drives, sometimes memory cards, and USB external hard drives, and then plug them in and then enjoy your media.

Compared to a full-fledged HTPC, a media player such as the O!Play, and of course AC Ryan’s Playon!HD, can be considered limited, but for most people, that’s not the case. These are able to play pretty-well any type of media format you have, and let’s face it… a media player and external hard drive takes up a lot less space than even the smallest of HTPCs. 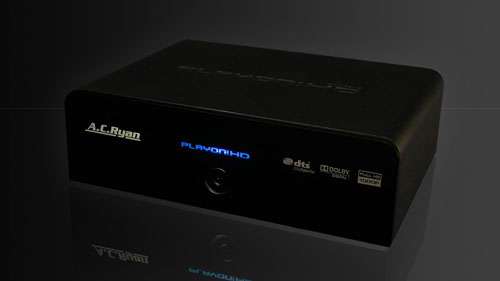 After the O!Play review, I vowed to continue taking a look at other options on the market, and since AC Ryan has pinged us about its Playon!HD since last winter, we decided now would be a great time to take it for a spin. Since there are so many of these devices available, if you have any in mind that you’d like to see us take a look at, please let us know!

One thing I’ve noticed about the media players we’ve taken a look at so far and others I’ve perused online, is that most of them offer virtually the same codec support, and in the case of the Playon!HD mini, it doesn’t seem like much is different. A somewhat unique addition is support for Real Media codecs, though, which many players for some reason omit. It could be due to licensing fees, however, and also the fact that it seems to be a niche codec (I have no idea where it’s used).

On an HTPC, missing codecs aren’t an issue that remain for long, since it’s easy to simply hop online and download what you need. But for media players, companies have to bundle support for everything that they believe their customers will need, and for that reason, there’s huge support seen here. If there happens to be support missing that you need, I’d be surprised.

I should note that while we’re taking a look at the “mini” version of the Playon!HD, there also exists a more robust non-mini version. The main differences are that the non-mini includes an additional USB port (Slave Port), a memory card reader, a built-in 1TB hard drive, and S/PDIF coax support. The additional features, namely the hard drive, results in a much larger device, but allows you to keep your media local, rather than tied to an external USB drive, or a networked PC.

We’ll be taking a look at the non-mini edition later this month or early next, but as the codec support and other key features aren’t a far stretch between each version, we don’t expect our end opinions to be that far different. With that all said, let’s take a tour of the mini.

Like most of the media players available, this one is about as black is they come. Though it’s a bit difficult to tell from the photo, the entire chassis is comprised of a hard textured plastic, while the face is a glossy plastic (aka: dust magnet). The power button is found right in the center of the front, and though not pictured here, “Playon!HD” is lit up in blue when turned on, and red if turned off. 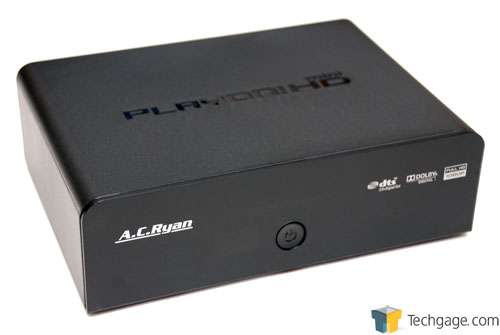 The Playon!HD mini is a bit smaller than the O!Play we took a look at last month, but a bit larger than the WD TV Live. Thanks to its increased size, though, a full complement of component/composite ports are found at the back, along with HDMI, LAN, S/PDIF and of course, the dual USB ports and AC power. 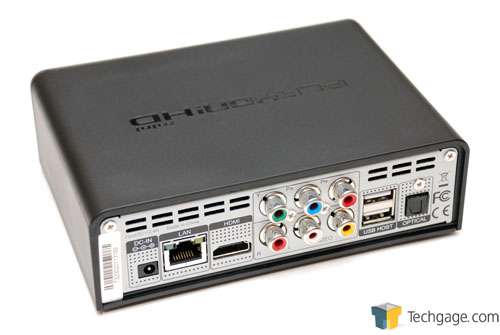 Here’s a shot for those curious about the size differences between the players reviewed thus far: 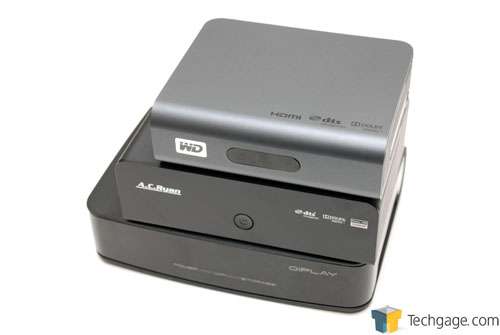 In the O!Play review, I downplayed the importance of an included HDMI port, and just assumed that it wasn’t a common occurrence to have one included, but AC Ryan has broken the mold by including a 2 meter sleeved cable here, and I have to say, it’s a great gesture. Coincidentally, my HDMI cable started to go on the fritz while testing, so AC Ryan’s inclusion helped out with testing a great deal.

Along with that cable, composite cables are also included, along with the AC power adapter and two AAA batteries for the remote. If you plan to use component video with the Playon!HD, you will need your own cables. 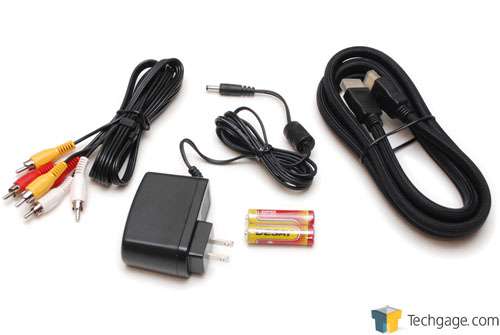 In our WD TV Live review, I commented that some people might find the included remote control to be too tiny, but no one will utter such words about the one AC Ryan includes with the Playon!HD. It’s as large and features as many buttons as a typical television remote! 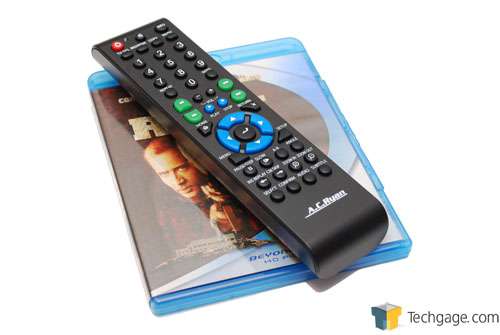 I personally prefer a large remote like this, since it feels more comfortable to hold and offers a plethora of options, but I can’t say that I’m thrilled over the layout of some of the buttons. The pause and play buttons on this remote are not one in the same, and they’re not even close to one another. I’m used to using the same button for both pause and play, so this took a little getting used to.

In a similar vein, the fast forward / rewind and next chapter / last chapter buttons are stacked on top of each other, rather than placed side-by-side. Again, when you’re used to the << >> and |<< >>| buttons placed right beside each other, this design will come off as being a little strange. Being that AC Ryan is a Dutch company, it could be that this style mimics European remotes, but either way, it comes off as a bit clunky.