On the lookout for a gaming monitor that can do it all? If price isn’t a concern, Acer’s Predator X34 is the one to look at. It comes in at 34 inches, boasts a 3440×1440 ultra-wide resolution, makes images pop with an IPS panel, takes advantage of NVIDIA’s G-SYNC frame-smoothing technology, and if that’s not enough: it’s curved.

When it was announced last spring, I called Acer’s XR341CK monitor “drop-dead gorgeous”. Some time later, the company decided to swap the monitor’s G-SYNC capabilities with FreeSync, and then released the monitor as if no change happened. After that, the Predator X34 was born, a monitor like the XR341CK that sports G-SYNC in lieu of FreeSync, a boosted refresh rate, and tweaked aesthetics.

It also happens to be ridiculously good.

On paper, Predator X34 checks the important – and some not-so-important – boxes. One of the more notable features is its size of 34 inches. That means that the monitor claims a lot of desk space, but in return, it delivers expanded views in games, and more desktop space to take advantage of – versus resolutions of 1440p or less. 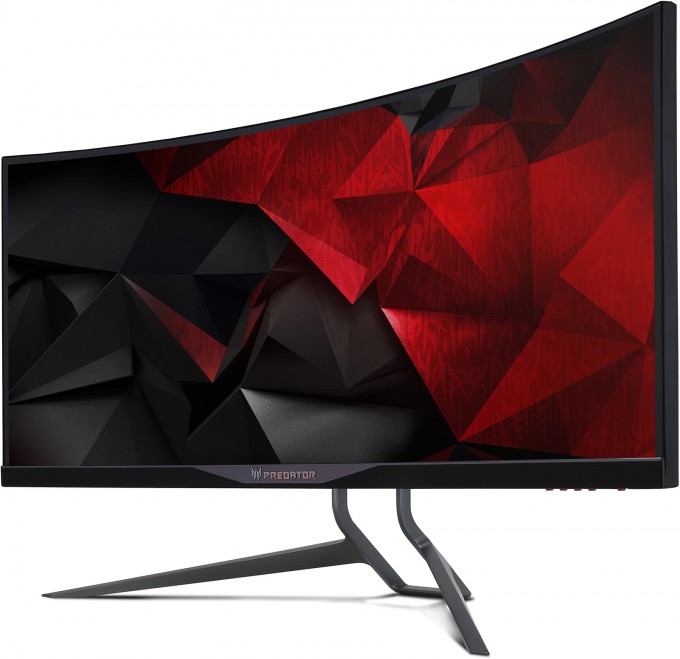 The monitor’s large size owes a lot to the width; the Predator X34 and a standard 27-inch 1440p monitor have the same pixel width of 0.233mm, meaning that this is “like” a 27-inch monitor, just 7 inches wider. That might seem like a minor point, but it’s important if you are moving over from a ~27-inch 1440p monitor and are expecting a learning-curve – there won’t really be one. Those who move up from a 1080p resolution or a monitor that’s 27-inches or smaller will be in for a surprise, but it’s a good one.

Due to a lack of room, I can’t take pictures of many products on a white background. Being that this is a 34-inch monitor we’re dealing with, that really wasn’t happening here. At least with these pictures, you can see the monitor in a more natural environment. The first shot below shows just how much room the display can take up on a modest desk.

Acer X34 Predator G-SYNC Ultra-wide Monitor - Back
The back of the Predator X34 is glossy. Very glossy.

Acer X34 Predator G-SYNC Ultra-wide Monitor - Hardware Buttons
Six hardware buttons can be found underneath the right side of the panel.

Acer X34 Predator G-SYNC Ultra-wide Monitor - DisplayPort and HDMI
You can use either DisplayPort or HDMI with the Predator X34.

Acer X34 Predator G-SYNC Ultra-wide Monitor - USB Ports
After connecting the monitor to a USB 3.0 port, you'll gain access to 4 ports at the back.

Acer X34 Predator G-SYNC Ultra-wide Monitor - Cord Organizer
Cable organization is made easy with this orange loop behind the display.

The fact that the Predator X34 commands so much desk space makes Acer’s stand choice hugely appreciated. Aside from its two thin (but strong) legs that extend from the back, a ton of room is left available around the monitor. In use, I had a router and a switch sitting to the left behind the monitor, a tablet and game controller sitting underneath it, and of course, a mouse and keyboard in front of it. If you’re using a smaller desk and a larger mousepad, don’t be surprised if you have to set part of the pad under the monitor.

All of the buttons on the monitor are hardware-based, not touch-sensitive – thankfully. There are six total, all found beneath the right side of the panel. The one on the absolute right is for power; I wish Acer decided to move that over even more to the right, as I’ve accidentally hit it when navigating the menu with the other buttons. There are no icons that correspond with the buttons on the front of the monitor, so a lot of the tweaking will be done “blind”, based on feeling where each button is.

At the back, and on the left side, are HDMI and DisplayPort connectors; on the right, there are 4x USB 3.0 ports. In order to make use of these, a USB cable (included) must be first run from the display to an available port on your PC. Towards the center is the port for the power adapter, as well as an audio out connector for speakers or headphones.

It’s worth noting that the Predator X34 has a small loop at the top of its stand that lets you route cables through. It works great to keep cables out of your way, and it of course helps things look cleaner, too.

Acer X34 Predator G-SYNC Ultra-wide Monitor - Acer Close-up
Acer's proud enough of this monitor to apply a chrome-ish logo to the back.

For some reason, the Predator logo on our sample has seen better days, but apart from that, I have no complaints to speak of.

Some curved monitors have more of a curve than others, but on Predator X34, the effect is subtle – at least when sitting in front of it. After showing a family member the monitor, they didn’t even realize it was curved until I told them. During regular use, the fact that it’s curved doesn’t even stand out too much. After having used the monitor for two months, I admit that I’ve come to like the curved design, but I don’t feel like the monitor would be losing anything if it missed out on that feature. Of course, if the monitor suddenly lost its curve, it’s hard to predict whether I’d want it back or not.

Inside the box of the Predator X34 is its power brick, an HDMI and DisplayPort cable, as well as a wall mount.

Acer X34 Predator G-SYNC Ultra-wide Monitor - Backlight Bleed
The Predator X34 suffers from a bit of IPS glow at each corner. The effect in this shot is enhanced because it was taken with a long shutter speed.

Prior to receiving the Predator X34, I had assumed that the 3440×1440 resolution would win me over – and sure enough, it did. The photo of Sleeping Dogs gameplay above will hopefully portray at least a little bit just how cool the resolution is, and not to mention how dominating the display itself is. When a game takes proper advantage of ultra-wide resolutions, the results can be downright gorgeous.

One of the shots above highlights the Predator X34’s IPS glow, which is much more pronounced than I’ve seen on other monitors. The photo above emphasizes the issue due to a slower shutter speed being used to snap the photo, but even in regular use, that glow isn’t too subtle when watching or playing in dark scenes. This isn’t a downside per se, as IPS glow is typical of all IPS panels. It’s just that on this monitor, being that it’s so wide, the effect of the glow is more noticeable.