Ever download an application from some shady-looking website and weren’t confident that it’d be 100% malware free? Today, the threat of malware is so strong, that it’s hard to feel confident even after putting a file through a barrage of anti-malware tools, because the chance of brand-new malware that’s not yet defined is all too real.

For friends who happen to download things left right and center, I have on occasion set them up a virtual machine to use as a sandbox, where they would test any and every downloaded file in there first, before moving it over to their real Windows install. To me, this is a near bullet-proof solution, but unlike True Image’s “Try & Decide”, it’s not all that convenient to set up.

Try & Decide essentially emulates what I just described, by turning Windows into a safe house, where nothing you do is going to break your system. You could theoretically install some of the worst malware out there, but because True Image can easily undo everything, it’s of no real threat. Overall, using the feature is simple, but powerful.

One important thing to mention, though, is that by default Try & Decide will only protect the C: drive. If you have other partitions, I’d recommend enabling protection for those as well, via the “Protected partitions” option. Try & Decide will take longer to activate, but it’s an important step, because if you do install malware that happens to scan your computer for files to corrupt, non-protected partitions could be affected, even after an undo. 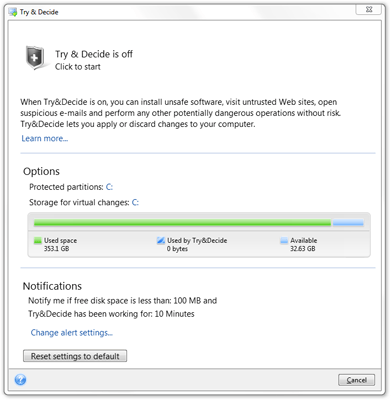 After you click “Click to start”, True Image will spend a couple of minutes setting things up. Once the mode is enabled, anything you do can be undone. If you delete a file off of the desktop, it will return later if you undo your actions. If you install mind-boggling malware, undo will make it look like never happened.

Because of this total OS engulfment, this isn’t a mode you use and then do actual work with. It’s designed to allow you quick access to a safe environment, and then give you the ability to undo everything if need be. If you happen to install some software and it doesn’t install a bunch of malware, then you can apply all of the changes, rather than undo them.

In my test of Try & Decide, it worked just as described. I had deleted a couple of things out of my documents folder, created some new files, and installed an application, and after the undo, all of that was reverted. Because I installed an application, I had to reboot to undo, and I became a bit worried because Windows Update was getting in the way. Fortunately, that didn’t affect Try & Decide at all, and after my reboot, things were undone, and my Windows up to date.

All of the features talked about up to this point are the biggest ones that True Image Home 2011 offers, but there are other neat utilities that are included that I couldn’t just not talk about. To help round this review out, I’ll talk about a couple of the more notable ones.

Before I continue, though, I should mention that one notable feature I didn’t touch on was Online Backup, which as you’d expect, allows you to back up your files online. This requires a subscription service, and allows you to store up to 250GB worth of data, for either $5 a month, or $50 for the year, which is quite a good deal (by comparison, Google offers 200GB of storage space for $50 a year).

As I understand it, this online feature not only allows you to keep files backed up, but also full PC backups. And in addition, you can keep backups online for up to five different PCs, which adds to the value even further. At the price it’s being offered for, even I’m considering it as an off-site backup solution.

Online backup aside, let’s take a quick look at some other cool features. The most notable to me for those who want to keep their PC as secure as possible is the Acronis Startup Recovery Manager. What it does is offers a splashscreen at your PC’s boot that will appear before Windows’ boot screen, and from here, you can push F11 to initiate the process to help you restore your PC back to working condition. This kind of feature isn’t new, but it’s unbelievably useful.

The feature that sucked me into True Image was this one, and in all regards, it’s a major feature, but one that not a lot of people are going to have to use. What it allows is almost full functionality of True Image’s features outside of Windows. You can burn an ISO to a CD or even create a bootable thumb drive, and after booting up to it, you’ll see an interface like this: 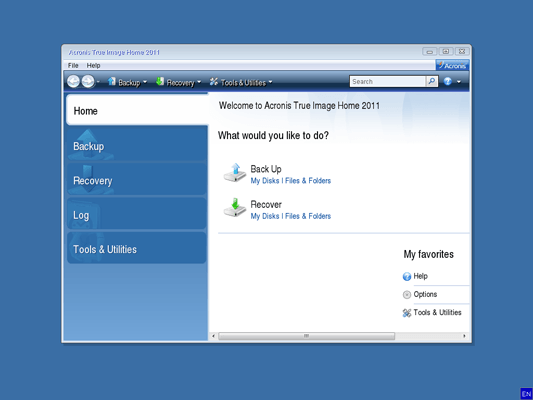 To my knowledge, this boot environment is comprised of a Linux kernel, and likewise, you can backup and restore Linux partitions just as easy as you can Windows partitions. The main feature here is to backup and restore, but you can also do things like create a secure zone, enable the recovery manager, clone a hard drive, or cleanse one.

Overall, this is what I consider to be a brilliant tool, and one I’ve spent a lot of time with since I first began using the program. I have restored at least 50 backups with it, and just once had a problem – a problem I am lead to believe was due to my own negligence (corrupt due to bad network transfer).

The absolute first thing you will want to do after purchasing True Image is to create this bootable media, because if you are left with a borked OS, it might just save you.