Looking for an alternative solution to a wireless LAN or drilling holes in the walls for a clean wired connection? The Actiontec AV200 might be of interest, with the ability to create a network using the power sockets already in your house. As it turns out, it’s effective, and incredibly easy to set up.

In the realm of home networking, nothing beats a good run of Cat5. Currently, wireless can match neither the performance nor reliability of a wired network and in every way imaginable, this isn’t surprising at all. By now however, most home users have incorporated a wireless router into their network, more than likely the 54 Mbps 11g, which provides the average user with the convenience of a wireless connection.

However, connections such as this still don’t provide the performance that many users demand, leaving them with no real alternative to running cables either across their floor, through their walls or in their crawl space. I don’t know about you but routing cables is a true pain. There really isn’t any other way to put it. I have done the wall snaking and I have spent too many hours under homes and while the latter approach is a little bit easier, both are total PITAs.

Unless your home is made in the past 5 years, there is a good chance that you don’t have Cat5 behind your drywall. One thing I bet you do have is AC power lines. As homes built with networking in mind start to gain more and more popularity, it does little to help us stuck with homes lacking such convenience. If you’re not a fan of draping cables across your home, what other option do you have?

Another scenario is this. Say you have a wireless router, either 11g or 11n. This setup still has a finite range and once you’re out of that range, your pretty much out of luck unless you get a repeater or add an extra access point. Even then, your still subject to the somewhat flakiness of a wireless connection. Luckily, there are alternatives and there have been for years. Unless you need total mobility or have a streaming device in your entertainment center that is in plain sight, it might be easier to let your current AC power lines do the dirty work for you.

Power line Ethernet adapters are nothing new and have been around now for a while. One company dedicated to the advancement of this technology is Actiontec. Makers of many different home networking devices, they currently offer two different adapters of the 85 Mbps and 200 Mbps varieties. Today, we will be working with the latter. The MegaPlug AV 200 Mbps Ethernet adapter offers the convenience of TCP/IP communication but without the need to run Cat5 from one point to another. 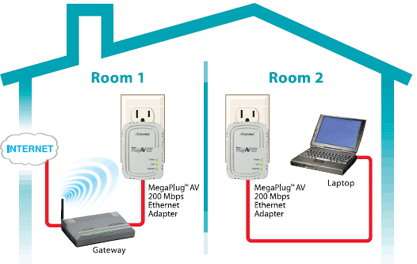 The concept is actually quite simple. Coming in pairs, you plug one adapter into a wall outlet and run a Cat5 cable from the adapter to your PC. You then plug the other adapter into a separate wall outlet and run a cable from said adapter to your router or modem. Boom! You’ve just done all that you’ll need to get up and running as fast as possible. As simple as this sounds, and trust me, it is, we are going to examine this technology and see how well it performs in a real world environment.

The Goods and Setup

Shipping in a router-ish sized box, the Actiontec MegaPlug AV reminds us considerable that you can achieve up to 200 Mbps speeds with the device but in all reality, you will not realize these speeds at all. Regardless, the packaging provides a good example of what can be done with the adapter kit, pointing out the many advantages of using a device such as this. 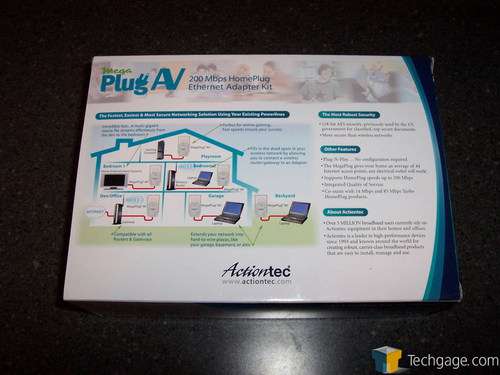 Opening up the box, the included manuals and setup disk lay on top of the minimalistic contents of the package. Included in the box are the aforementioned manuals and setup disk but also a pair of MegaPlug AV adapters and two 6 foot Cat5e cables. Nothing special about the included gear but beautifully simple, providing us with everything that we will need to get our network expanded into places never intended to offer a connection. 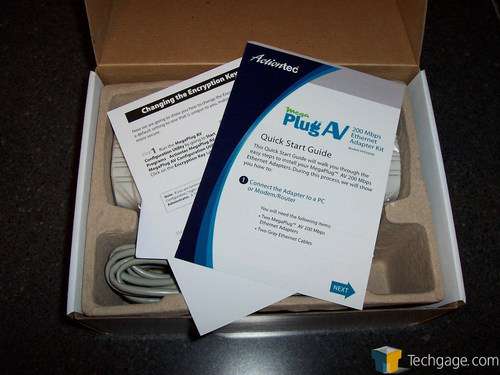 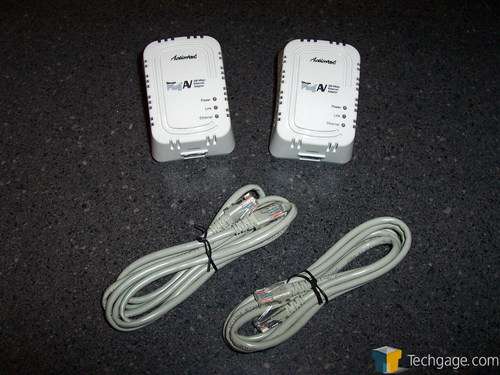 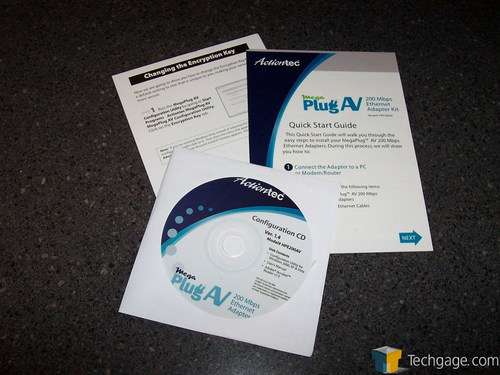 The units themselves are your typical wall-wart style adapters with three indicator LED lights in the lower right hand corner indicating power, link and Ethernet. There are venting slots all the way around the adapter, allowing adequate cooling (assuming that it even needs it). Turning it over reveals a standard 2 prong plug yet lacking a third ground prong. Underneath the unit is a female RJ45 jack, allowing the MegaPlug to connect to your PC or router depending on which end of the network your setting up that particular adapter. 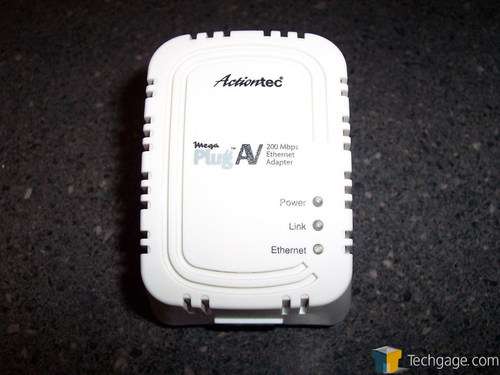 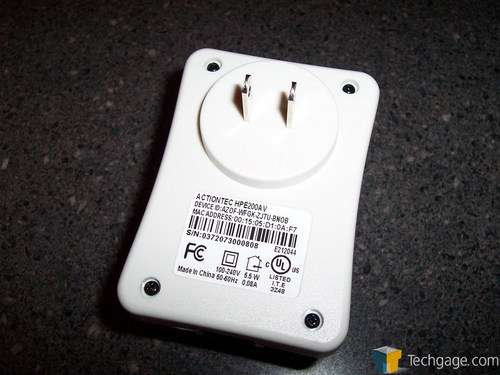 With the look at the product out of the way, let’s get right to installation.