by Rob Williams on May 25, 2020 in Graphics & Displays, Processors, Software

The latest versions of Adobe’s Premiere Pro and Media Encoder bring significant encode performance improvements to our graphics cards. With this 14.2 release, we revisited all 21 GPUs we just finished testing for our latest Radeon Pro review, and added a bunch more on top to help paint a better overall picture.

Adobe released updates to a number of its audio and video applications last week, including Premiere Pro, Media Encoder, After Effects, and Audition. While these updates bring a healthy number of individual improvements across the lot, it was the mention of faster GPU encoding in Premiere Pro and Media Encoder 14.2 that caught our eye first.

With the move to support AMD’s and NVIDIA’s native GPU encoders, export times can be improved across-the-board, sometimes dramatically. After doing a quick test on one GPU, we saw promising enough results and decided to toss a few more into the workstation and see how scaling changes across the board, from low- to high-end. 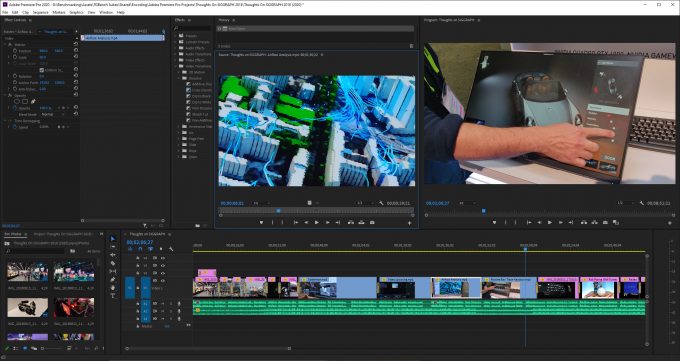 You can get a fuller look at the updates on Adobe’s official blog. For this article, we’re going to focus entirely on GPU encoding performance, pitting a collection of 21 GPUs from AMD and NVIDIA against each other in the new 14.2 release, as well as 14.0.4 (which was used in our recent review of AMD’s Radeon Pro W5500).

There’s certainly no “one” way to measure Premiere Pro or Media Encoder performance. Even if we were to single out one piece of the workflow, like encoding, one or two results is going to tell only part of the overall story. Our attention here will be to focus on AVC and HEVC encoding from AVC, RED, and ProRes sources. We’re planning to explore additional performance angles in the future, including, of course, playback performance.

We’ll explore other important details as we go along, as the need arises. For now, here’s a quick look at our workstation PC specs and tested graphics cards:

When we started exploring performance in Premiere Pro and Media Encoder 14.2, we felt compelled to do a special test using four different encoding configurations, but using the same hardware. In the Media tab of Preferences in either PP or ME, there’s an option which reads, Enable hardware accelerated encoding and decoding, and if enabled, the GPU will be used for both tasks.

The big question: should you enable it? The answer is likely to be “yes” any way you look at it:

Off the top, it’s an interesting set of results we see between the 1080p and 4K projects when using CPU encoding – their strengths effectively flip-flop (even after retests). Ultimately, that doesn’t really matter, because it’s clear that you’ll probably see your best performance with the GPU handling the bulk of the decode and encode. If you believe CPU to be the superior encode, then you’ll want to disable hardware encode in the preferences, but keep Mercury Playback Engine locked to its GPU Acceleration option. Using software encoding also provides more granularity in the options you can use, since options like two-pass encoding can not be used with GPU encoders. 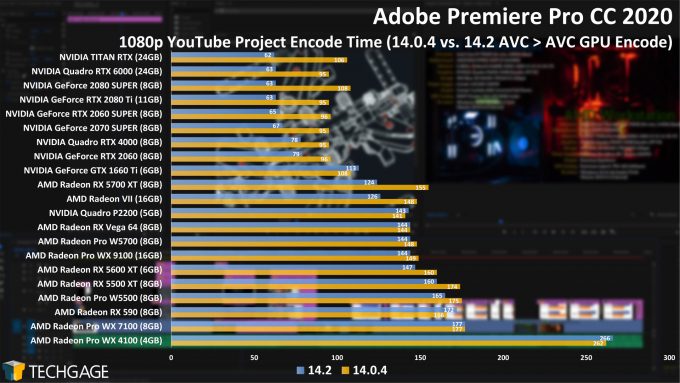 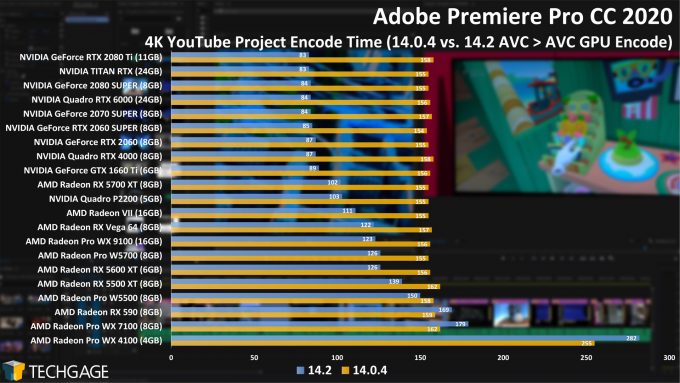 The projects used for testing here are behind two videos that have been posted to our YouTube channel. The 1080p/60 AVC source came from a Panasonic camcorder, while the 4K/60 is largely sourced from mobile phone footage. Both are fairly standard projects, without heavy use of effects, but we’re exploring expanding our testing to better reflect that use.

The more you look at these results, the more there is to learn. It’s immediately clear that the 14.2 update benefited the vast majority of cards in this collection, although there were a couple of exceptions. If you see a result that seems a little strange, you can rest assured that it’s one we retested, because we can’t stomach being unsure about our test results.

At the low-end, the older Radeon Pro WX 7100 and WX 4100 actually performed worse in the latest version, in both tests. Meanwhile, the rest of the Radeons enjoyed some benefit, but overall, NVIDIA’s flexing its muscles harder than AMD here. 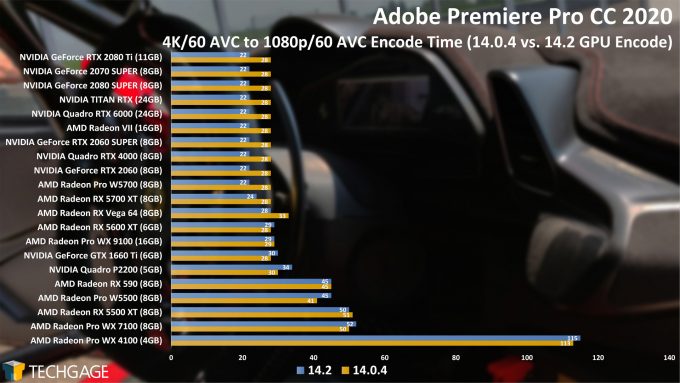 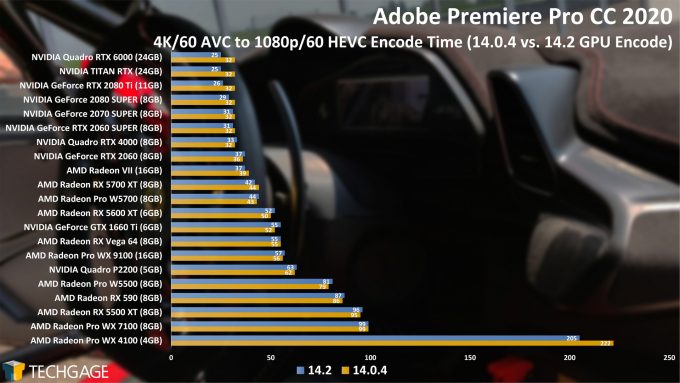 With our AVC encode source (60 seconds 120Mbps), we seem to be hitting a performance bottleneck with AVC, but HEVC encoding improves scaling a wee bit across the board. The overall numbers are modest considering the length of the clip isn’t too impressive, but at the same time, it’s nice to see most cards have done much better than real-time at both resolutions.

While NVIDIA’s GPUs in particular all seem to agree on performance at the top-end, all of those cards saw obvious gains from the simple move to the latest version of Premiere Pro. 6 seconds off of a 28 seconds encode might not seem like much, but that translates to an encode that finishes more than 20% quicker – and all just from a software upgrade. That will matter when your encode takes tens of minutes, or hours.

On the AMD side, it’s only a few models that managed to see an improvement, with most of them showing a slight degradation in performance instead. 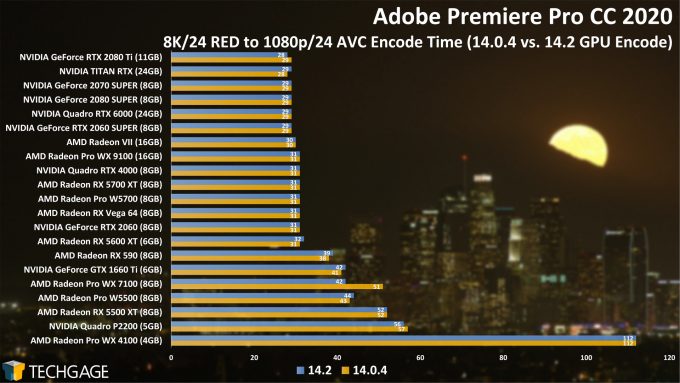 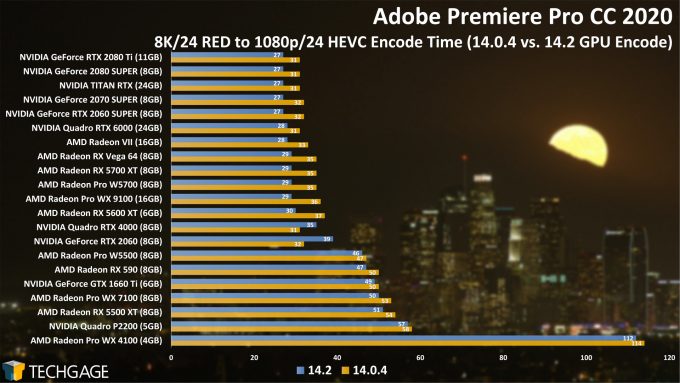 As we saw with the AVC source test above, the AVC encode from RED (8:1 22 seconds 1,367Mbps) source scaling doesn’t look much more impressive across the stack. Overall though, 14.2 didn’t really make much of a difference to any GPU other than the WX 7100 (which is funny, since it regressed performance in an earlier test).

HEVC thankfully changes things up a fair bit, with plenty of AMD and NVIDA GPUs alike enjoying immediate gains from the version bump. Well, all of those except the GeForce RTX 2060 and Quadro RTX 4000. Those were two results we were quick to sanity check, only to see the scaling remain. 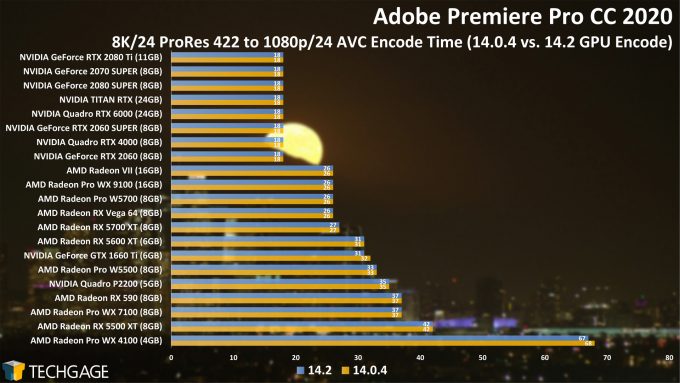 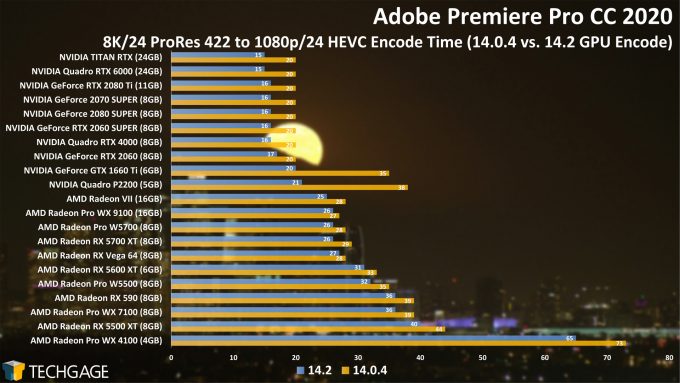 To wrap up our results, the AVC encoder from ProRes source (22 seconds 2,788Mbps) shows no real improvement between the last and current version, but yet again, the HEVC result shows some notable improvement. We mentioned earlier that one or two codec performance results will only paint a partial picture of overall performance scaling, and the final graph here highlights why.

In this ProRes to HEVC test, both the Quadro P2200 and GeForce GTX 1660 Ti saw tremendous gains between versions, and we feel compelled to assure you once again that retesting was conducted, and all of those numbers held firm. We’re not entirely sure why those GPUs in particular saw such massive boosts, especially since they both use different encoder chips. Either way, it’s nice to see. The same applies to that lowbie WX 4100 sitting at the bottom – even if saw decent gains.

To take best advantage of the GPU encoding improvements in Premiere Pro and Media Encoder 14.2, it’s best to have an officially supported graphics card. Adobe’s system requirements page lists a huge number of them, although there are a whack missing that we’d expect to be there.

On the NVIDIA side of the fence, Adobe shows official support for nearly every GeForce as far back as the Pascal generation (eg: GTX 980), with Quadro and TITAN going back one generation further, with Kepler-based products (eg: Quadro K6000). Oddly, absolutely no AMD Radeon gaming GPUs have made this list here; all of that support is tied to AMD’s workstation series, including modern Radeon Pros and aging FirePros. That doesn’t mean that gaming Radeons are not going to work fine, though. 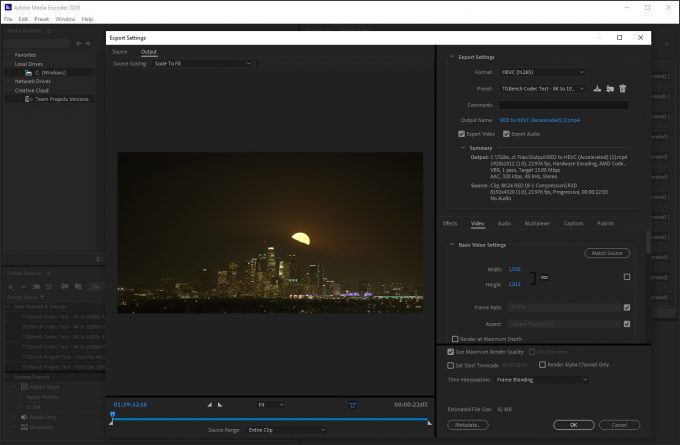 It’s also worth noting that these updates have also hit the macOS version of these solutions, and again, it’s all AMD FirePro and Radeon support on that side, thanks hugely to the fact that Apple booted CUDA support a few years ago, much to the chagrin of many of its loyal fanbase.

If you’re a Premiere Pro or Media Encoder user, it’s almost certainly a good idea to update and enjoy some performance gains. Of course, we’d be remiss to ignore some of the regressions we’ve seen with certain models, and if you happen to be using a lower-end GPU, you may yourself want to do some A-B testing to see which ends up working out best for you.

As mentioned before, we plan to expand our Premiere Pro testing over time, and also plan to eventually move all of our tests to NVMe storage in lieu of SATA, and then possibly expand to make them a bit beefier, in hopes of seeing more interesting scaling. Until then, suggestions and other thoughts are welcomed as always.