Adobe has kept many secrets about their Creative Suite 3 over the past few months, but today they are unveiling everything you need to know. This includes product lineup, pricing and bundle information and also the Photoshop Extended edition feature set.


With each new Photoshop version Adobe releases, their goals remain pretty much the same. It needs to be a tool that can help you get projects done in a timely manner and have them look good when they are completed. It also needs to be able to work seamlessly with other products to keep that workflow going. That said, this new version ushers in a new era, since it is the first major release since the acquisition of Macromedia. This added Dreamweaver, Fireworks, Flash and others to their arsenal.

Mac users are going to sit in a constant state of euphoria when using CS3 on their computers, as it’s fully optimized for use on Mactels. Both Mac and Windows users alike should notice an overall speed increase though, especially in the startup process.

Photoshops GUI never changes that much, to keep things simple and to avoid learning curves every other year. Even if you look at the oldest versions, you can tell it’s Photoshop. Adobe sticks to their roots with CS3, although it’s been upgraded in various ways. The overall GUI is much more flexible and intuitive this time around. The primary toolbox is now one column instead of two, which gives a slight larger surface area to deal with. 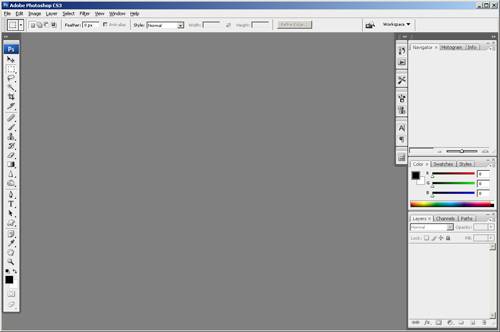 You will notice the gray theme that’s going on with the window borders. At first I wasn’t sure if I enjoyed this look or not, but it has kind of grown on me. A lot of the interface can now be expanded, attached to another, or split apart as you deem it necessary. In the end, you basically have better overall control of the userspace. The updated design may take a little getting used to, but it’s a smarter design I feel.

One of the first new features in CS3 I came to appreciate was the upgraded Quick Selection tool. Although it’s not perfect… it’s far superior to previous versions. 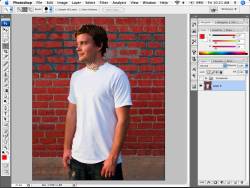 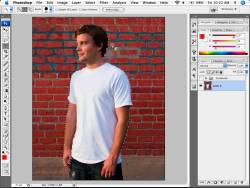 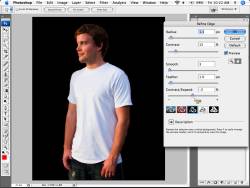 In the past, the Quick Selection tool has proved valuable, but would only give you the results you were looking for half of the time. If ever. The upgraded tool gives you far more control, because it allows you to draw around the object. Once you capture the object you want, you can go back and correct some of the problem areas, without losing your selection. It still requires some effort, but it’s a lot less stressful to use.

Smart filters at first sounds like quite a simple addition, but it’s a useful one. Have you ever added a filter to an image and later regret it? If you are smart when creating the image, then it’s probably reversible, but it is still time consuming. Smart filters are different because they keep track of all the filters you have applied to a layer or layer mask. You can see in the image that there are both motion blur and poster edges filters applied. 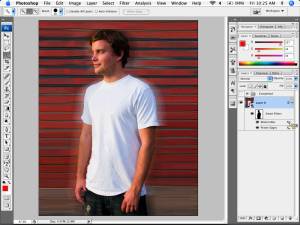 The cool thing is that you can right-click to remove one of the filters if you don’t like how it turned out, or even reverse their order. It’s not just limited to two either, so even late in your project you will have the ability to fix mistakes easily.

This is one feature targeted for photographers, and those photographers will fall in love with it. Have you had multiple images of the same scene but needed to take particular features out of each? The problem here is, you needed to layer the photos on top of one another and play with the opacity until you have everything aligned perfectly. I have done this a few times in the past and a few of those times it’s taken close to a half hour to deal with.

That’s where Auto Align comes into play. You have a few imported images, as you can see in the photo below. 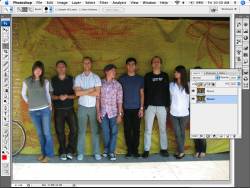 I don’t have the "after" version of this screencap, but essentially there were two images here. You can see that two people were not looking at the camera at the time the picture was taken, but another photo did have them smiling. Auto Align matched up the two photos perfectly and then the author was able to simply uncover the photo below and it fit well into place. Another example of the auto merge is seen below, where multiple handheld shots were taken of a building. Problems arose. The exposure was different for each shot, so lighting was an issue. 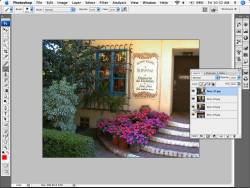 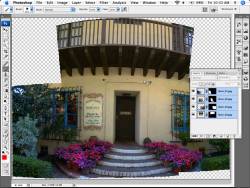 After running the auto merge, Photoshop automatically merged the four files together correctly and also fixed the lighting issues to make it look as though it was a single photograph. This would be a great feature for panoramas as well… which I’m planning to test out soon.

If you are a fan of black and white photos but don’t carry along B&W film or like the results that your digital camera spits out, you will -love- this new feature. It’s found underneath the Add Adjustment Layer menu under the Layers tab and allows you to adjust the RBGCMY tones to get the required effect. 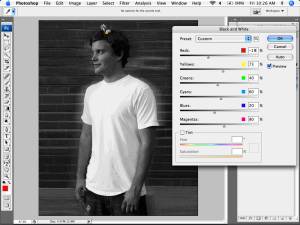 Don’t want to delve into the sliders? The drop down menu shows a list of various effects, such as taking a picture with B&W film while using a Blue, Red or Yellow filter. If one setting doesn’t give you the effect you are looking for, you can choose one and adjust the sliders a bit. This is one of the coolest new features of CS3 and should please anyone who has a passion for black and white photos.

Camera RAW has had a nice upgrade and compliments Lightroom nicely. Overall it’s been tweaked for optimal performance and has the addition of fill light and vibrance for better highlight and shadow control. Probably the most important feature is the nondestructive clone and heal tool, and you can see it in use below. 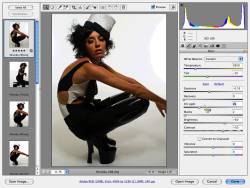 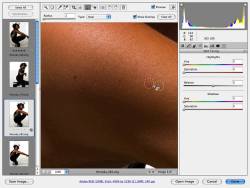 If there is something in the image you want to remove, you can select it with the tool and then follow-up with a selection of another part of the photo you want it to match up with. In this example, the woman in the photo had a few freckles that could be removed. Once you have the starting and end point selected, you can increase the size of the circles or drag either one of them around, until you see the result you like. Any steps you make using this tool are not saved until you want it to be. If you later adjust the tone or any other settings of the photo, you can undo the clone tool with a click of the button.

The popular feature that many raved over in CS2 has been upgraded in CS3. One complaint in the first version was that you could only work on a 90° angle, which is completely restrictive. Now though, you can create a plane and swivel the extension to make it fit whatever it is you are dealing with. In their example, here is a CD case and artwork to be pasted on it. Once you create the skeleton with VP, you can paste the artwork in and move it around to fit naturally. 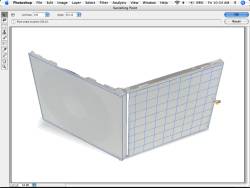 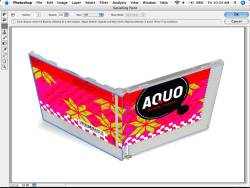 Although there are more new features in CS3, these are a few of the biggest and most popular. Once I spend more time with the program and realize all of the new features, I will follow-up with another article and give updated thoughts. You might now be wondering about the Extended version though, so flip to the next page and I’ll show you what it’s all about.