Adobe has kept many secrets about their Creative Suite 3 over the past few months, but today they are unveiling everything you need to know. This includes product lineup, pricing and bundle information and also the Photoshop Extended edition feature set.


Adobe thought they’d spice up their lineup a little bit by throwing in an "Extended" edition. You might ask why it’s not just simply called Photoshop CS3 Professional. Well, Photoshop is a professional tool to begin with, so that would likely cause more confusion. However, this edition of Photoshop is indeed beneficial for different types of professionals, in addition to those who deal also with 3D modelling and video.

When I first heard that the Extended version would handle 3D files, I immediately thought that they were trying to make Photoshop an “all-in-one” type program. They reassure us that this is not the case. They do wish to give a little more freedom to those who need it though, so that those are not always having to hop around from computer to computer all the time.

Many people who create 3D models will need to texturize it in the program they created it with, such as Maya or 3DS Max. However, the Extended version gives people the freedom to import their model into their image and then texture it there. Beyond that, they will still have simple control, such as the ability to rotate/move it and also look at the wireframe. In the below picture, you can see the energy drink can, which was created with another application. 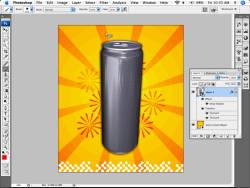 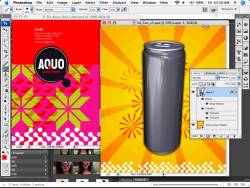 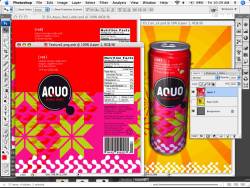 The model already has two textures applied to it, for the actual texture of the can. You can also see that a drop shadow was applied, so Photoshop will treat it like any other object. On the previous page, I showed you how the updated Vanish Point works. Well here is a similar tactic. Once your vector graphic is opened, you can simply click and drag it over to the can and apply it.

Even though it was a flat graphic file, the shine and texture of the can remained. At first, I imagined the 3D capabilities to be a rather simple addition, for tasks as demonstrated above. However, one popular screenshot shows off an entire modeled house, imported from CAD.

It’s apparent that these 3D capabilities are more than just for simple tasks. The bonus is that after texturizing your models, you can export to the same format you imported from. I can’t comment on how great this feature is yet, since I don’t have this version in front of me. When that time comes, I will elaborate on it. As it stands, it looks to be a feature that will be welcomed by a variety of people.

It’s becoming increasingly difficult to believe that Extended is not a jack of all trades. Those who have to deal with video files on top of their graphics will enjoy this feature, because you can import your file and then edit it at any point during the timeline. You can clone features of the animation and have them show up later on, or edit out imperfections… whatever you feel like. 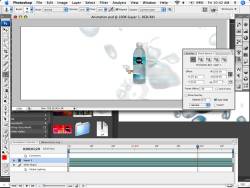 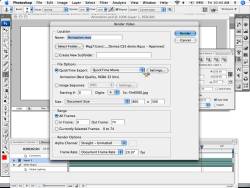 Once finished editing, you can export the video in a variety of formats and also choose the resolution. This is not a feature I ever expected to see inside of Photoshop, but lo and behold… it’s here.

Although these features will not be of much use to the casual user, they should prove invaluable to doctors. A popular image format in the medical industry is DICOM, which are for scans. In Extended, you can open up these files and view all of the relative info and then edit the image accordingly. 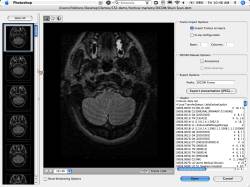 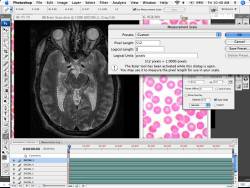 One main example Adobe gives is a scan of a human head. If doctors needed to measure a portion of the brain to make sure all is in check, they can use a magic wand like tool or draw around the area and then specify the length. Then they can take that calculation and use it in the rest of the image. I’m sure a doctor would explain this better than I could. It’s a good thing I am not the one playing around with your brain. 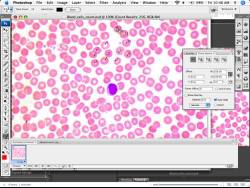 There’s a new counting feature as well. In the image below you can see red blood cells. As you’d imagine, they would be a pain in the white blood cell to count manually. This new tool allows you to hover over each cell and it will automatically count them for you. The reason there isn’t a feature to automatically count is simply because there could be inaccuracies. Some of the small dots may not need to be counted (again, not a doctor), so an automatic count would prove unreliable.

This feature is similar to the auto merge / auto align, except that it has the ability to note greater differences. The example here was a beautiful day, huge fountain and cool background. The problem is that tourists were abundant. So, six different pictures were imported and the Median stack mode was selected. 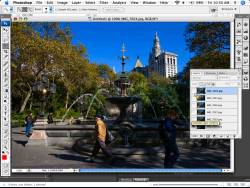 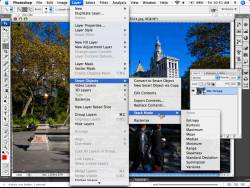 Once again, I do not have the "after" shot. However, the effect was that Stack Mode detected the differences in each photo and effectively removed the tourists out of the picture. At the same time, it aligned all the photos together to make sure the result was clean. Because of the way it "merges" the photos, it also removes overall noise.

New versions of Photoshop are not sprung on us when we least expect it. It’s something that happens every few years, and more times than not, the updated version is well worth the upgrade price. Personally, I cannot suggest that an upgrade is with it to you, because that’s a personal decision. Even most of the features discussed in this article, I have not had the benefit of testing out yet. Looking over the new features though, this doesn’t seem like an upgrade you’d want to pass over, especially if you are a photographer.

I really enjoy a few of the new features, especially the revamped selection tool, auto align and smart filters. The auto align would be one of the primary reasons I would personally upgrade, simply because I snap a lot of photos and it would be nice to be able to take large panoramas or multiple snapshots of something and have Photoshop snip them together. I will be testing all these features over the next few weeks and will give more refined opinions prior to the official launch next month.

In this small article, I am sure I barely covered a small fraction of what’s new, but I did cover the most notable. These are all features that Adobe is pushing for, so I don’t expect anything else amazing to be included or else it would have been mentioned. If you have $200 to spare, you will not regret an upgrade. As for the Extended version, you will only benefit from that if you deal with 3D models or -really- like the stack mode. It has a lot more features designed for measurement/medical and CAD applications, but for most of us, it will be overkill.