For most of you who shoot with a digital SLR, I’m going to start by asking who shoots in RAW format. Go ahead, raise your hands! Ok, those who know why you should shoot RAW, keep them up… the number got a lot smaller, but I’m glad to see we’re training people well.

For the uninitiated, RAW is a straight dump from your camera’s sensor. This is in contrast to a JPEG, where the camera (and its itty-bitty little computer) automatically compresses the image in a very lossy format before ever trying to store it. In fact, you lose at LEAST a third of your color sensitivity right off the bat if you’re not shooting RAW, plus a whole host of white balance and exposure information that you could be tweaking later.

Why should you care? Well, for starters, color fidelity – a camera’s sensor is at the very least 12-bit, vs. a JPEG at 8-bit. Now, I don’t know about you, but I’d rather that my big, intelligent computer that I spent a lot of money on choose how to compress an image instead of my itty-bitty camera. Second, a camera only has limited control over white-balance, whereas a computer can fine-tune every shot individually. 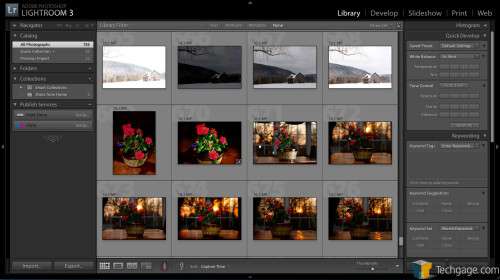 Finally, that compression from 12-bit to 8-bit really stings your ability to fix or tweak exposure settings later – by blending seemingly similar shadows in the JPEG algorithm, you create blocks and blobs of color that can’t be lightened well later if your shot came out too dark – and whites are worse by an order of magnitude (JPEG is notoriously poor at handling white vs. near-white). This means that when you blow out your highlights, you can’t recover them… at all.

The problem with RAW is that you actually need a professional program to work with the files – like Lightroom. One of LR3’s biggest improvements was that it ships with Adobe Camera Raw 6 (the same as in Photoshop CS5), which hosts a substantial amount of benefits over its predecessor. Now, I hate to link another website in our own review, but if you want the skinny on just what kind of difference this makes, you should check out Ars Technica’s great “features” review of the update.

For the most part, what you can expect is some fantastic noise reduction on your higher ISO images, as well as a lot brighter colors. Much like Dave at Ars, I was always finding myself bumping up the saturation on images processed through ACR5, so that change is a nice touch. The excellent noise reduction is another great boon, as I’m not a very big fan of third-party fixes like Noise Ninja.

Lightroom 3 imports RAW files just like any other image, which makes getting all of the benefits of RAW completely transparent to the end user, with no extra steps required. The import window itself had a bit of a re-skinning with LR3, as well – it used to be just a cobbled-together window based on the OS, which looked somewhat out of place against the polished, dark look of LR2.

The new importer seems to “fit” better thematically, and actually runs a bit more quickly. To get to it, simply plug in your camera with Lightroom open – it will do the rest for you, including making automatic (and non-destructive) adjustments to your pictures based on your lens and camera combination. The biggest of these is the newly updated automatic lens distortion removal, which pulls from a database (or you can create your own profile) of lens/camera combinations and automatically fixes barrel and pincushion distortion.

Page List
Top
1. Introduction
2. The RAW Workflow, Explained
3. Organizing Your Shoot
4. Developing Your Masterpiece
5. Getting it Out There; Performance Notes
6. Final Thoughts
<< Back
Forward >>