Page 5 – Getting it Out There; Performance Notes

This area is one that I will not go into a lot of detail on – there are simply too many options, so I recommend that you download the demo and have a play for yourself. On top of all of the basic options are a multitude of plugins that will make your life or that specific look easier to achieve. I personally have made extensive use of the web gallery tool, as well as printing directly from Lightroom (which is really quite good, even by professional print standards), and even just the basic “export” from the file menu in Library mode.

The social media updating to Flickr and Facebook are both new to LR3, at least as “baked in” features. They are a handy feature and work as advertised, but are hardly anything much to write home about. For most of us prosumers, it’s a great feature to have and can be a great way to get the word out to friends and family when a new shoot is done. However, it’s worth noting that other sites are still available via free third-party plugins – so if you don’t see your site of choice listed, it should hardly be a dealbreaker. 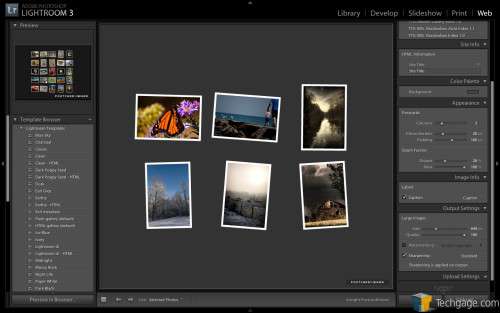 At this time, I do want to take a couple seconds to give a nod to a couple great third-party plugins. For basic exporting, I highly recommend the donation-ware LR/Mogrify 2. It uses the ImageMagick set of programs to do everything from custom watermarking (if you don’t just want text, which LR3 handles automatically) to specialized crop/resize to adding very nice borders. It’s well worth a look, especially if borders on your final images are desired.

The next two plugins both belong to the Web gallery items, and though neither is free they are both worth their costs. First, I’d give a hearty recommendation to SlideShowPro, which makes beautiful Flash galleries. Second, it’s worth taking a look at everything offered by The Turning Gate, which has created quite a few webpage formats and portfolio designs as well as some fun gallery display methods like the postcard site. A couple of these are included (in limited form) for free with LR3, but the full versions allow some great additional features.

For those who have worked with Lightroom in its younger states, I will say that performance has substantially improved in LR3. I wish that I had taken metrics of the old performance, but to be honest I didn’t think that it would make much of a difference when I updated. Things do tend to be much snappier in the newest version, particularly in larger galleries.

The greatest performance bump though by far was importing – LR2 was quite a bit slower pulling over and cataloging large batches of files (100+ RAWs). Whether this inefficiency was due to an earlier version of Adobe Camera Raw or LR itself is unknown, but the speed-up is certainly a nice bonus.

Initial startup is slightly longer in LR3 than LR2, and catalog backup time is about the same. Your mileage may depend on the size of your initial catalog as to whether you’ll even notice a delay, as my default catalog has over 1000 images, not including duplicate TIFFs from my Photoshop exports (which are plentiful). However, most processes (switching between Library and Develop modes, slideshow exports, etc) tend to run a bit faster and more smoothly in the new version.

Page List
Top
1. Introduction
2. The RAW Workflow, Explained
3. Organizing Your Shoot
4. Developing Your Masterpiece
5. Getting it Out There; Performance Notes
6. Final Thoughts
<< Back
Forward >>