Adobe’s Lightroom 4 has been available for a couple of months now, and our very own shoot-a-holic Brett Thomas has been using it regularly since its release. The company has been touting much with the program’s latest iteration, so join us as we explore whether it’s worth upgrading to or if it’s just more of the same.

There are a couple new options to get your photos and videos out of Lightroom now. The first and most talked about is the new “Book” module, which allows you to create your own personal photo album to be printed. Once completed, the book can be printed by the vendor Blurb or straight to PDF on your local computer to distribute.

The pages of the book come in a variety of formats, and user-created templates will only help to increase the availability. There are layout options for everything from general snapshots to a complete narrative with pictures, allowing you to effectively create a variety of effects and ideas. Initially I thought that this module would be a fairly lame attempt at developing cheap portfolios, but the truth is that it’s well built and the choice of Blurb as a publisher gives a lot of weight to the final quality. 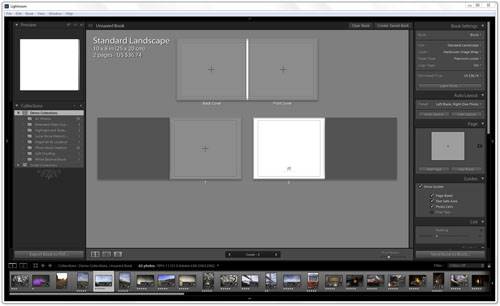 Along with the book option is an improved set of tie-ins to common sites like Facebook, Flickr and Gmail. These ties allow quick “drag and drop” sharing across social sites with no further interaction required by you. Previously, photos required a certain level of export steps to be sent on their merry way to these sites, so this addition is a timesaver to those who use them frequently. Put in parameters (including a watermark feature!) and drag the pictures to the icon, and poof!

Likely the only feature that a true photographer will notice about Lightroom 4 is that it comes with the newest version of Adobe Camera RAW, which is an excellent processor for the files that high-end SLR cameras produce. The updates to Camera Raw are actually what most of the photography community has had to say about LR in general in this release, which should tell you something – there’s just not that much else to talk about. That being said, it’s a valid ‘hook’ to encourage those of us on the pro side to sink our money into the upgrade.

The new “process” for Camera Raw brings out more reds than the previous version in my Canon SLR, which is particularly appealing (I’ve had to correct that a lot in the past). In fact, saturation of colors in general has increased, and the images look a lot more vibrant. Should you want to apply this look to your previous pictures, all you need to do is tell Lightroom – each Raw file will be asked whether you wish to use the old version processed by the prior Camera Raw, or whether you would like to update your image to the 2012 version. Be aware that the differences can be quite striking, depending on the source image!

Along with Camera Raw, Lightroom 4 sports the new 1.4 specification for Adobe’s DNG (Digital Negative) format. There aren’t a whole lot of changes here that an end user will notice, and the spec documents aren’t finalized so I won’t go through it here. However, the interesting thing to note is that DNG now will offer lossy compression, when it was previously only lossless. The implementation and quality of this has not been studied much, but it is a JPEG-based algorithm. Currently, LR4 does not seem to ask for lossy compression when converting your RAW files to DNG (either in Import or in Preferences), so hopefully this inclusion is simply to support future camera behavior.

So is it worth it?

Adobe has put the photographer in me in an awkward position with this review. Several of the changes are beneficial to people who are not photographers, a couple are beneficial to those who are, and there are still a ton of changes that I would LIKE to have seen but have now gone unaddressed for four versions.

First, the good: The interface hasn’t changed much, and what did change are positives. The Highlights and Shadows adjusters are far more intuitive and well-balanced than the old ways. Localized contrast, sharpening and noise reduction are vital to any program that makes a name for itself as an editor. These things are well implemented and well-done. The book feature looked like it was going to suck, but Adobe brought its “A”-game and created what may well be the most useful export feature for a pro-sumer like myself. Add in Camera Raw and the whole thing becomes at least a semi-decent upgrade. At the home user level, video editing is a nice addition and the new maps can bring your images a new dimension as you reminisce (seriously, how did these two features end up being what everyone loved about this release?). 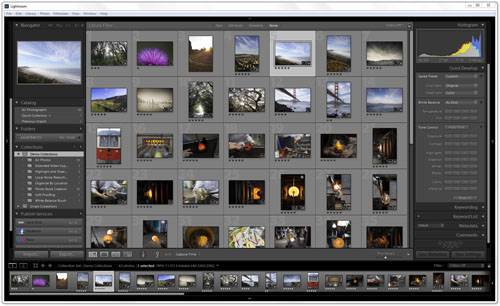 The bad: We’re still stuck with a lot of klunky stuff, too. Export to Photoshop still requires creating either a TIFF or PSD, with no option for a smaller image type or temporary file. Getting photos edited by other editors back into Lightroom can pose an additional challenge. There is still no hotkey for the second external editor and the plugin integration with otherwise powerful Photoshop plugins that have been rewritten for Lightroom (Nik Software, OnOne Software) is still terrible. The “Web” publishing module (for making your own websites) still has utterly crappy choices for templates and anything better doesn’t work smoothly. Not a single default template in that group is HTML5, either. For the company that owns Photoshop, Dreamweaver and Flash, that list of complaints is simply unacceptable. It’s its own IP that it’s ignoring.

Overall, there are a lot of things to love about the new Lightroom – but all of them would barely be sufficient to pay for the old upgrade cost. As it stands, though, the price has fallen to a ridiculously cheap $80 upgrade or $149 (the previous upgrade price) for the full version… keeping Lightroom on the map as it branches out from its roots.

Much like Apple with the most recent Final Cut Pro, I’m looking at Adobe’s next moves to see exactly whose business the company is courting going forward. Lightroom 4 has a lot of new solutions looking for problems, while not addressing the problems its prior versions already had. These changes so far have made it a more versatile program for everyone while neglecting the target market that made it popular and viable in the first place. However, at least Adobe didn’t do that market any real harm, and offered a few shiny baubles for the inconvenience. This version is a “buy it because it’s priced right” for now, but Adobe is going to have to start listening a bit more to its photographers if it wants to avoid Lightroom becoming nothing more than the next iPhoto.