Ageia’s PhysX started out as a killer concept but now that concept is reality. Today we take a look at that reality and touch on what it offers and what it will offer in the future.

The physics craze has been upon us for quite some time.  There have been some big name players in this industry debate and pick apart the approach that Ageia has decided to take.  We all know the story by now… Ageia develops the worlds first add in physics card, names it PhysX and sends it out to the public.  There have been other debates as to how game developers should program their games to further the gaming experience by creating a lifelike environment through advanced, in game physics.  We also know the approach that Ageia has taken to providing said experiences.  This is all well and good but all we have seen so far is the demos from the GDC where Cell Factor was being played on beefed up systems with the Ageia PhysX card.  I have been fortunate enough to have the chance to play around with the new PhysX PPU provided to us by Ageia and BFG.

The BFG version of the PhysX card comes equipped with 128MB of onboard GDDR3 memory with an effective data rate of 733 MHz and operates through a standard 32-bit PCI 3.0 bus.  The PPU itself has 125 million transistors and is built using .13 micron technology.  The memory bandwidth is rated at 12Gbytes/sec. with a peak instruction bandwidth of 20 billion instructions per second.

Those are all nice numbers but I am more interested in what they translate into when playing games.  So far, there are no games that have been released in their final versions to test the uses of a dedicated PPU.  There is the demo for Ghost Recon: Advanced War Fighter and from what I have read, over and over, this game will take full advantage of the PPU.  Since this isn’t a full fledged review, but rather a look at what more than likely will be possible when games are released, I am not going to get into all the details that I would normally get into.  This is designed to let you all know what I am going through when I test out the PhysX PPU from Ageia. 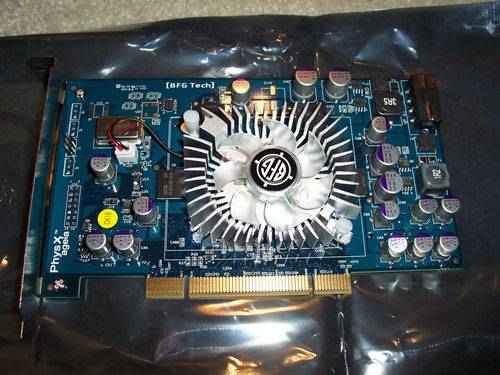 What you are seeing is the actual card that was sent to me from Ageia.  It would appear that little has changed since we took a look at it at the GDC.  The layout of the card is exactly the same.  This isn’t a problem at all, but rather an observation.

Like I said earlier, there is little to offer in the realm of games that fully support a PPU.  At the time that this article is published, there are 0 games out and 2 playable demos that one can use to test out the PPU.  There is GRAW and Cell Factor and aside from those two game demos, you are S.O.L if you want to play something else that uses the PhysX card.  Not a big deal at the moment because the card itself is not available for retail purchase.  You can however; purchase the PhysX card pre-bundled in PC systems from Dell, Alienware and Falcon.  In the coming days, the full release of GRAW for the PC will happen as well as Rise of Nations: Rise of Legends.  These two games are the backbone of the software support that Ageia desperately needs in order to give the PhysX card the momentum it needs to truly soar.