If you are a gamer that uses a headset, you know that it has to be high quality in order to be ahead of the game. You want to know which direction enemies are in, and you want it to sound like you are in the game. We are taking a look at the Altec Lansing AHS602i gamers headset, which includes many features that may appeal to the hardcore gamer.


Once I received the AHS602i for review, I immediately liked the appearance. The headset is composed of a Silver/Black scheme, which many people would find no problems with. I can easily see that comfort was a priority, because the head strap and ear pieces are very well cushioned. If you are a gamer who plays for hours on end, then you will find no problems with them feeling uncomfortable.

To add to the comfort level, the ear pieces also swivel a fair bit, so that it will fit most everyones head perfectly. If you had a square or egg shaped head, you would still find that these feel great. My previous headset review, the Logitech USB 350 had awesome sound, but because I had glasses, I had found I would get irritated after wearing the headset for more than an hour. I have not had any such issues with the AHS602i.

The only issue I have found, and it’s a small one, is that after a while of using the headset, my head would feel warm. Because the ear pieces cover your ears so well, you don’t get that much air circulated around that area. I have only found this to be the case if I wore the headset for more than 3 hours. If you are a normal person, unlike me, you likely would get out of your chair more often than every three hours anyway.

Because the ear pieces cover your ears so well though, it adds to the sound experience, because it cuts off a good amount of sound around you. I have a fan in my bedroom that’s fairly loud when running. After putting on the headset, I can hardly hear it at all. If you have television or other sounds going, you will likely hear them, but it does a good job of blocking them out so you can only hear the game or music that you are playing. 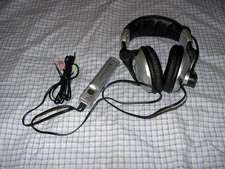 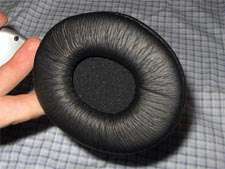 The microphone on this headset is attached to the left ear piece. It’s flexible as well, so you can move it to the best position for you. After being used to the Logitech USB 350, which has the microphone on the right ear, I figured this one would have felt ackward. It certainly didn’t though. As a whole, this is one great looking headset, that’s extremely comfortable.