The history of the Altec Lansing name goes backâ€”way backâ€”to the late 1930s. The â€œLansingâ€ in the companyâ€™s name is James B. Lansing, an early audio pioneer whose initials also serve as the name for another landmark audio company: JBL. Altec-Lansingâ€™s claim to fame in the loudspeaker world was their enormous A7 â€œVoice of the Theatreâ€ loudspeaker, which was developed to satisfy the motion picture industryâ€™s desire for greater fidelity and output from theater loudspeakers.

The focus of this review is the new Altec Lansing PT6021 audio system. Itâ€™s a powered 2.1 speaker system that incorporates the same loudspeaker technology used in their FX6021 model, but with two obvious differences at first glance. First of all, itâ€™s black, where the FX6021 is silver in color. Secondly, the system includes a universal remote. Huh? A PC speaker system with a universal remote? Upon further investigation, it turns out that PT stands for â€œPowered Theaterâ€.

Altec is positioning the PT6021 to be more than just a speaker system for your computer. The mounting brackets included with the system are intended to allow easy mounting of the satellites to the frame of a flat-screen television, hinting that Altec Lansing has home theater applications in mind. The slim profiles of todayâ€™s plasma and LCD televisions donâ€™t leave much room for decent speakers, and the PT6021 is primarily envisioned as a replacement for the internal speakers, offering crisper sound with improved low-frequency response.

The PT6021â€™s tall, slim satellite speakers certainly make a bold aesthetic statement in any application, whether standing tall on your desk or hugging the wall next to your prized plasma screen TV. A thoughtful inclusion is the universal remote, which you can use to operate a range of audio-video gear, as well as the speaker system itself. This speaker system could be especially attractive for Media Center PC users who seek improved audio quality without investing in a stack of components and separate loudspeakers. However, the inclusion of the universal remote suggests that this speaker system might be used in audio-visual systems without any PC at all. 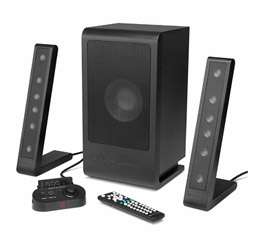 Needless to say, this is not your typical computer audio system, and for that reason, this will not be your typical computer audio review. Iâ€™ll be testing the PT6021 both as a typical PC speaker system, and also in a home theater setting. Home theater use will be a new kind of challenge for the system, its audio components originally conceived for a high-quality PC audio system. The home theater testing of this system will be torturous. And rest assured â€“ even the bundled universal remote will be put to the test. This is one product that will need to work hard to earn its keep. Weighing in at just under $350, its price puts it within spitting range of several excellent 5.1-channel speaker systems. Can the Altec Lansing PT6021 handle the extreme challenges of home theater performance while delivering the clarity and balance that high-end customers demand?