Page 2 – Out of the Box; Specifications


My PT6021 review sample arrived in a plain cardboard box, with minimal exterior markings. It is sometimes the case that manufacturers order their products from China in plain cardboard boxes, and then repackage them into the consumer cartons, featuring the productâ€™s image, features, and other pertinent information. I suspect that my review sample was simply sent directly to me without being repackaged. Upon opening the box, I was greeted by the instruction manual, and the top of the subwoofer module. The other system components were securely packed in the side of one of the Styrofoam blocks. 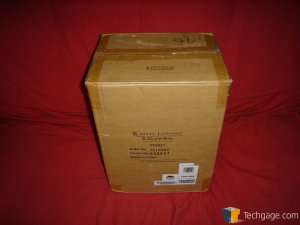 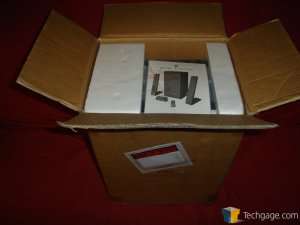 The carton contained the subwoofer with attached power cable, the instruction manual, the satellite speakers with attached cables, weighted bases for the satellite speakers, the universal remote, a smaller credit-card remote, the control pod with attached cable, a stereo RCA signal cable, two eight-foot speaker cable extensions, and brackets for mounting the satellite speakers to the frame of a flat-panel television, with an additional packet of hardware for assembling the brackets. I unpacked all of the cartonâ€™s contents and laid them out for a photo. Batteries for the universal remote are packed with the instruction manual, and the button-cell battery for the smaller credit-card remote is also included. 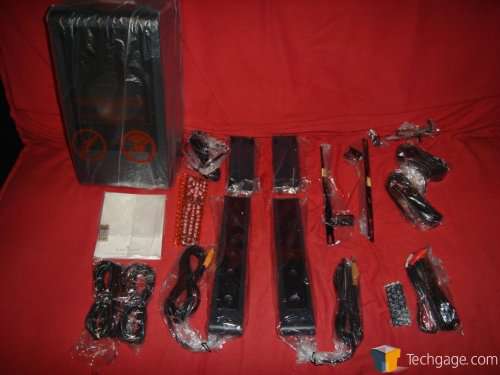 The inclusion of two eight-foot extensions for the satellite speaker cables is thoughtful, but I was disturbed by the omission of a 3.5mm cable, even though the 3.5mm jack is present on the rear of the subwoofer. Those who seek to use these speakers with a home theater PC (or a PC of any sort, or a portable music player, etc.) will find themselves making a run to the local RadioShack for the appropriate cable. I see no reason why a 3.5mm audio cable should not have been included with this set, and I think that Altec Lansing would do well to revise the package to include one. 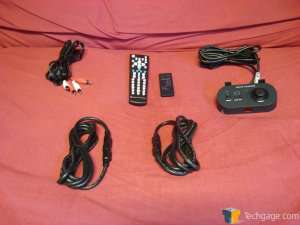 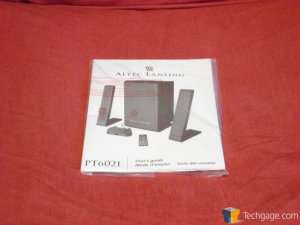 (The full list of specifications can be found in the PT6021 brochure. The specs listed here are the ones youâ€™re most likely to use in comparing this system to others.)