The satellite speakers of the PT6021 each employ six 1â€-diameter â€œmicroâ€ drivers, which use neodymium magnet assemblies. By weight, Neodymium magnets possess nearly ten times the strength of ordinary ceramic magnets. The primary advantage of these micro drivers is their ability to perform like a conventional driver of larger diameter, moving plenty of air while preserving treble detail.

The satellite speakers arenâ€™t heavy, but they do have a feel of quality to them. A perforated metal grille covers the tiny drivers. Overall, while the design concept is evocative of the Harman/Kardon SoundSticks, its execution in this system is much more aesthetically appealing, in my opinion. At fourteen inches tall yet only two inches wide, stability of the satellites is a concern, but the weighted bases are sufficiently stable to eliminate that concern.

The stands allow for the satellite speakers to be angled up to 15 degrees rearward, or 5 degrees forward. Assembly of the satellites to the weighted bases is straightforward and simple. However, inserting the wire into the channel in the base tears up the insulation, and removing the wire again tears it up even more. To save the cable, assemble and disassemble these speakers as infrequently as possible.

Altec also claims that this â€œline arrayâ€ configuration exhibits less drop in output as the listener moves further away when compared to typical point-source speakers. This is why the line array concept has achieved such broad appeal in live sound â€“ it allows exceptional â€œthrowâ€ capability without obliterating closer audience members in the process. Altec Lansing devotes three separate amplifier channels to each satellite speaker due to the signal processing involved. 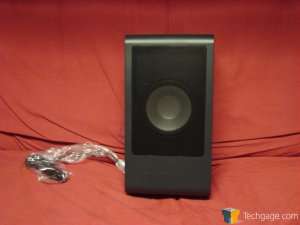 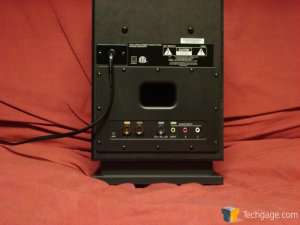 The PT6021 subwoofer seems fairly solidly constructed. It certainly is large, which bodes well for its low frequency capability. Bigger subwoofers can move more air, which is required for muscular, full-bodied bass. Yet the enclosureâ€™s shape helps to retain the impression of compactness. This subwoofer uses a 6.5â€ woofer with a silver-colored polypropylene cone and ceramic magnet, and also employs a rear-firing reflex vent for deeper response and greater output.

The systemâ€™s controls are located in a separate pod, which allows greater placement flexibility for the satellite speakers while keeping the controls within easy reach. The â€œStandbyâ€ button functions as the typical â€œpowerâ€ button would, shutting off power to the amplifiers but still supplying power to the control module, so that the speakers may be powered-on via remote control. Power draw in standby is minimal.

Also included is a small â€œcredit-cardâ€ remote with basic control functions for the speakers themselves. This is the first powered speaker system Iâ€™ve seen that includes a universal remote as part of the package. The blue function buttons operate the functions of the speaker system. The rest of the the function buttons are white, and operate the functions of whatever device is being controlled by the remote. Both remotes are infrared, and will require line-of-sight to the control pod in order to work. 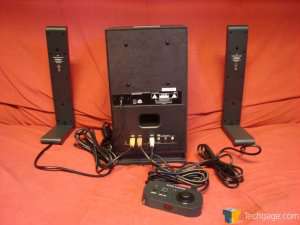 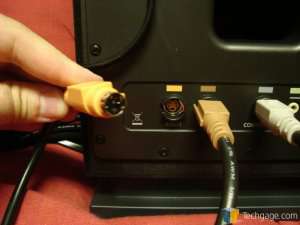 Setup should be a straightforward matter for anyone familiar with hooking up a computer system. Any device with so much as a headphone output jack can be used with this system, with the appropriate cable (which, as I mentioned, wasnâ€™t included). All the elements of the system (and all input sources) connect to the subwoofer, which contains the amplifiers for the system. However, the control pod also contains a headphone output jack (which mutes the speakersâ€™ output when connected), and a convenient auxiliary input jack. The satellite speakers connect to the subwoofer through multi-pin DIN connections, instead of the typical 3.5mm mini-plugs, RCA connectors, or tinned bare wire ends used by other systems.

A side effect of InConcert Technology, which requires that each symmetrical pair of drivers receives its own amplifier channel (for a total of three per satellite), these beefy multi-conductor wires will be difficult to hide for those who intend to use this system with a large wall-mounted display. The DIN connectors felt a little loose in their jacks, as though the slightest jostle could pull them out. The same was true with the connectors on either end of the speaker cable extensions.

The control podâ€™s DIN connector felt much more secure, however. The floor is always the best location for any subwoofer, for maximum performance. The PT6021 subâ€™s design is tasteful, though, so you wonâ€™t feel the desire to hide it away behind something. Indeed, I find that the entire system looks better in black than it does in the FX6021â€™s silver finish. If you elect to mount the satellite speakers to a flat panel television, the assembly becomes a bit more involved, though not excessively so.