We covered a handful of major renderers on the previous page, but we’re not done yet. On this page, we’re going to take a look at a few more, including some industry mainstays and newbies. Adobe’s Dimension is the newest renderer to our testing fleet, which yet again joins Corona Renderer, which joined the fun about a year ago. 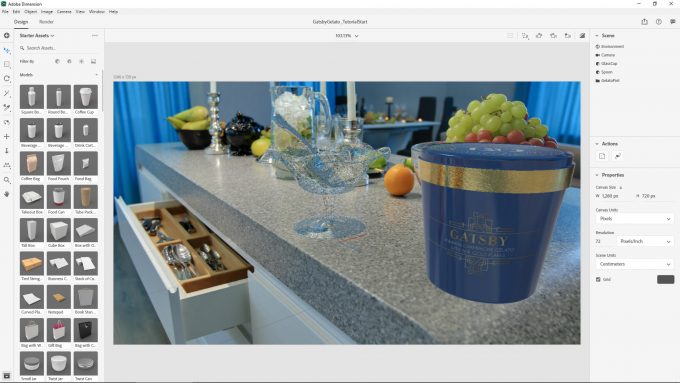 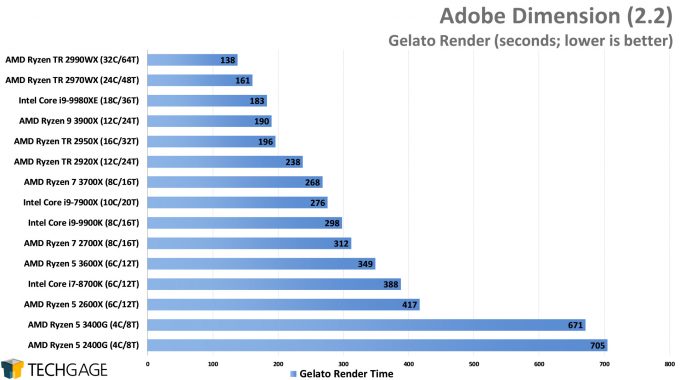 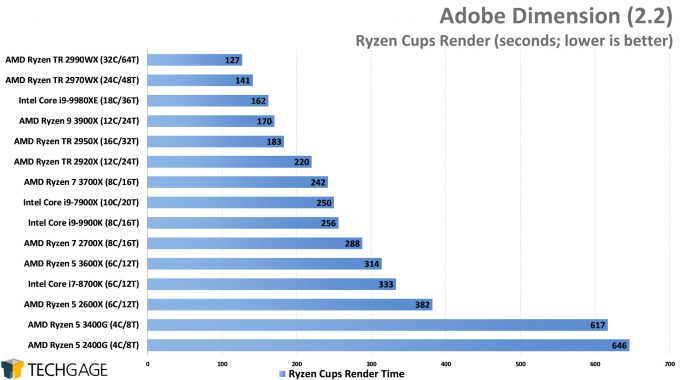 We’re beginning this page with similar performance scaling as seen on the previous pages, with cores mattering a lot more than clock speeds here. We’d imagine that if Intel’s 28-core part were more customer-friendly, it’d go toe-to-toe with the 2990WX well here. Alas, we say that at a time when we know more Threadrippers are en route, and AMD is pretty core-happy, so we could see a fabled 64-core part for real at some point.

It’s funny to talk of such many-core chips when looking at the bottom G chips, though. It’s almost unfair to look at these chips in this kind of context, because even the six-core models will easily obliterate their performance. Again, though, half of the appeal of an APU is its inclusion of graphics, so you win and lose battles with the G series depending on what you’re after. It’s interesting to think of how a 6- or 8-core APU would fare in tests like these, especially if the IGP could be engaged a little bit. 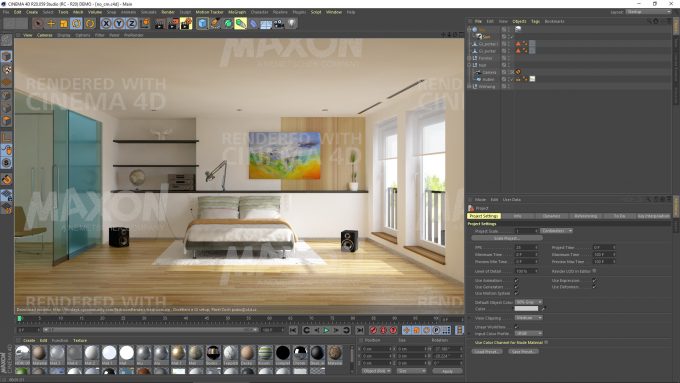 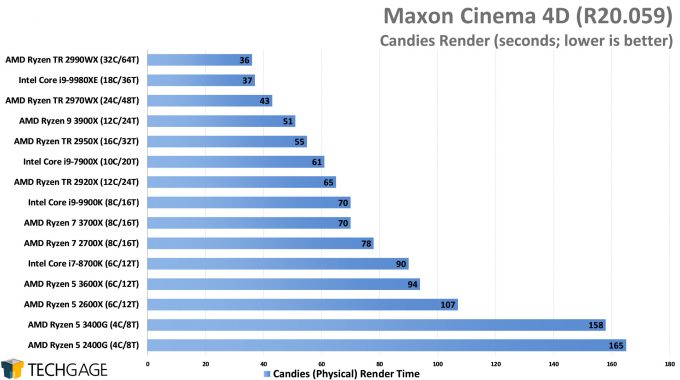 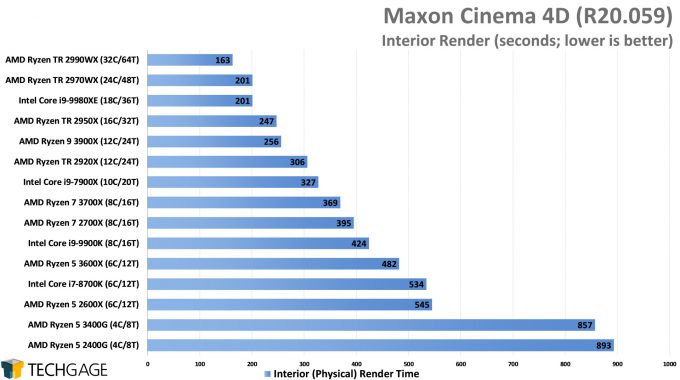 Again proving that not all workloads are built alike, we see varying scaling between these two tested projects, but neither to a real significant degree anywhere. In the simpler Candies test, the 18-core Intel chip keeps right up to the 32-core chip. In the same test, the 8700K pulls ahead of the 3600X, but the roles reverse in the Interior scene.

With Cinema 4D R21 having been released a couple of weeks ago, we’re investigating upgrading to it for our next suite revision, which is coming soon.

Of course, Cinema 4D has a standalone benchmark that represents its overall performance fairly accurately, so let’s see how placements fare there: 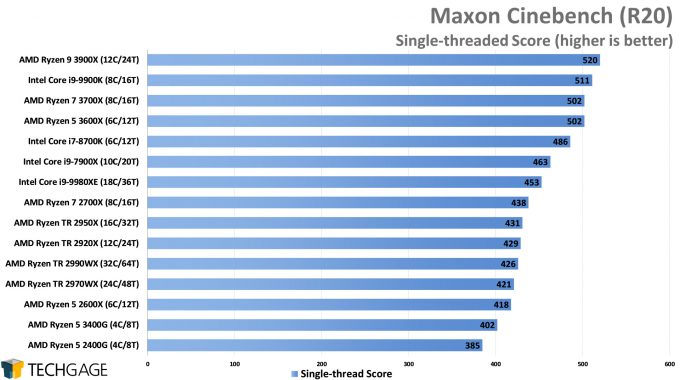 Because we’ve already tested multi-threaded performance with our real-world renders, it’s arguably the single-threaded test in Cinebench that’s most interesting here. No one is rendering to a single core, but this test does give us a bit of insight into which processors are faster at quick single-threaded tasks. Normally, Intel easily dominates this particular chart, but that was until AMD’s Zen 2 came into the picture and spiced things up.

One thing both of these Cinebench graphs highlight is that the G chips are definitely not going to offer much breathing-room at the bottom end, making them better-suited for more basic or HTPC-type use. It’s hard to ignore the differences seen from a chip like the 3600X to 3400G – a full 20% drop. Granted, this is only a single test, so it can only be weighed so heavily. 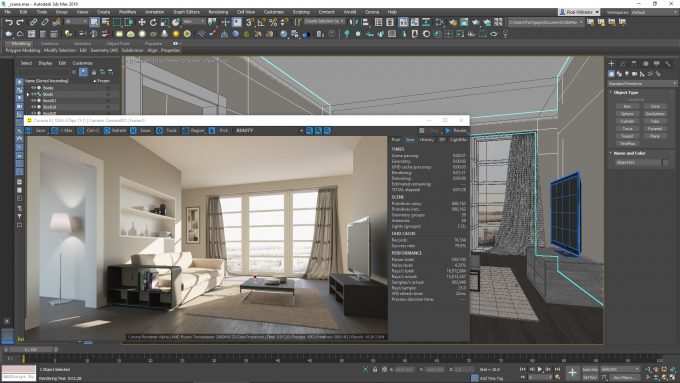 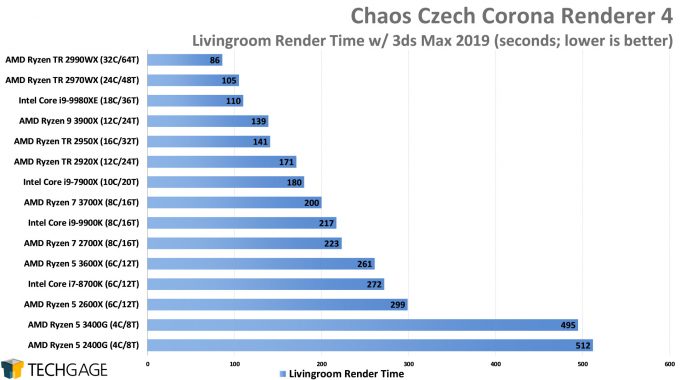 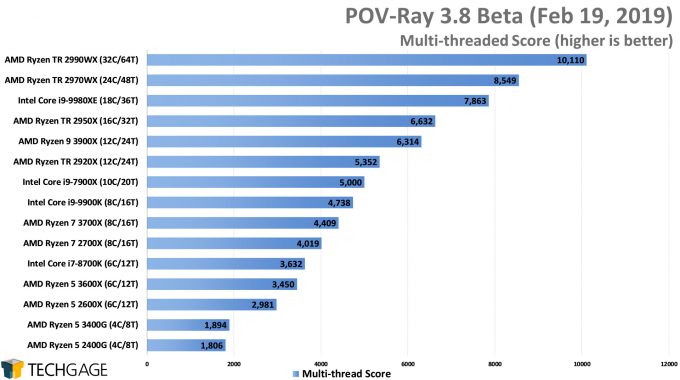 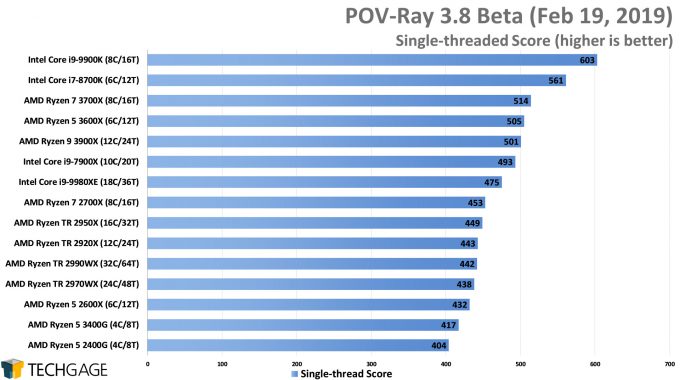 As a bit of a second opinion to Cinebench, we use POV-Ray for a more neutral (as far as we know) look at rendering. The scaling here aligns a lot more to our expectations, with the single-threaded tests putting Intel on top, but multi-threaded doing the same for AMD. It’s interesting that in the single-threaded test, even the huge Threadrippers outscore the quad-core APUs. Just imagine if the 3400G was built around Zen 2. We really want to see that chip yesterday.