As the many results found throughout this review can attest, not all workloads are built alike, and for that reason, it’s never safe to assume that a CPU suitable for one person will suit someone else just as well. There are assumptions that can be (relatively) safely made about general overall performance, but if you find yourself running one workload more than any other, that should factor into your next purchase.

In reality, reviewing the 3600X and 3400G together is a bit odd, because while they’re only priced $100 apart, they cater to completely different audiences. The Ryzen 5 3600X targets those who want more breathing-room than a quad-core can provide, but who may not necessarily be running encoding or rendering workloads all too often, if ever. 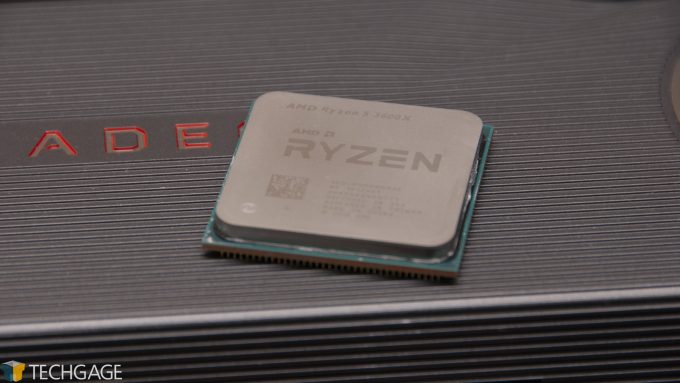 By contrast, the 3400G targets those who want a simpler desktop PC that still manages to pack a reasonable punch for its $150 price tag. It’s just hard to see those highlights when we don’t have comparable Intel chips on-hand to include. We also didn’t get to test the APU’s built-in GPU, but we may at some point in the future. This leads us to a story time:

When we received the 3600X and 3400G, we planned to review them separately, aiming to spend more time on the GPU aspect with the 3400G. Over time, complications arose, and we never got around to it, and because we need to justify the time wasted, we’re putting this mini-rant to paper.

To keep our testing as accurate as possible, we always try to use the same motherboard for any given series of chips. Our plans for that with this article were thwarted when our Aorus X570 MASTER refused to boot with the 3400G installed, an issue that AMD ended up replicating. After weeks of EFI releases and no corrected support, we decided to suck it up and move the chip to an MSI B350 board. Despite it being last-gen, it had an EFI update to support Zen 2.

As it happens, this MSI board refuses to update its EFI. Either inside of the EFI itself, or with the Windows tool, any attempted flash will result in absolutely no action being taken after the reboot occurs. We even left the PC to sit for an entire hour on one occasion to see if that helped, but no cigar. Even clearing the CMOS on the board failed to improve the situation.

We then got hold of a newer B450 board from Aorus, and our issues finally disappeared. We’re not sure why we’ve had so many issues overall, but we can say that if you buy an APU, you should verify with a search that the chip is working as it should, since motherboard support pages may not always be accurate (and weren’t in our case). 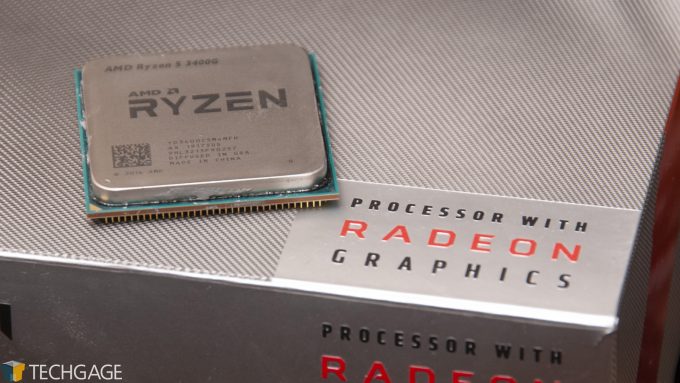 Tying into all of this, we never managed to achieve 3200MHz DRAM speeds on the 2400G before in our previous-gen ASUS Crosshair VII HERO or the aforementioned MSI B350 board, but on this Aorus B450 PRO WIFI? It somehow works. It just seems like boards actually suited for these APUs support them better (go figure, right?)

We hate to hog so much of this page with those woes, but the truth is, we encountered one issue after another, and didn’t expect it, and because of it, we ended up not even getting around to IGP testing. We still want to do that, though, because we’ve been dying to know how it handles video game emulators for a while – and some real game testing wouldn’t hurt.

Overall though, the $149 3400G is a cool chip, but for those who want a desktop experience with a lot more freedom, the 3600X is a seriously attractive alternative for its $249 price tag, so it’s useful that we’re reviewing them together. But again, both are different products, and if someone needs integrated graphics, then the 3600X isn’t an option.

Despite there being just a 2-core difference between the 3600X and 3400G, the performance gains seen on the bigger chip were often much greater than the specs on paper would suggest. If you remove the threads, and back down to a 3200G, the performance hit will be even greater. But, for a PC that isn’t necessarily being used for heavy workloads, but instead acts as a basic PC or an HTPC that just needs to stream or torrent, then it becomes a lot of power for the purpose – thanks especially to SMT capabilities.

AMD’s Ryzen 5 3600X offers a ton of performance value at its price-point, but we’d be remiss to ignore the fact that the R5 3600 also exists, a chip priced at $199 that foregos the cooler and 200MHz. If you have an inclination to overclock, and won’t be using the stock cooler anyway, you may want to save the money and get an extremely comparable alternative instead.