If you’re interested in Linux performance, you may want to take a look at our experiences with these CPUs here.

We’re a little overdue on tackling our performance look on these chips, thanks in part to some hassle that happened along the way, but, it’s finally here. And probably just in enough time to leave a few weeks’ breathing room until the next launch, as AMD is expected to release its 16-core Ryzen 9 3950X at some point soon, and Intel has its i9-9900KS and new Core X-series slated for release next month.

At the Zen 2 launch, we checked out the 12-core 3900X and 8-core 3700X, and to say we were impressed would really be an understatement. Generation over generation, AMD packed in some obviously beneficial polish, with bigger gains than expected being seen in some cases. Fortunately, nothing changes for the 3600X. It also shows some sweet gains over its predecessor. 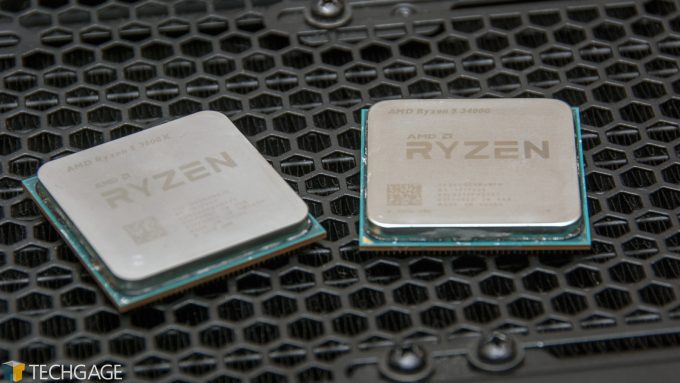 Alongside the 6-core 3600X, we’re also going to be taking a CPU-only look at the 4-core 3400G APU. As an APU, this chip bundles integrated Radeon graphics, but we haven’t been able to get to the testing we’ve wanted to with so much other stuff going on, but we still hope to tackle it soon(er than later).

As there’s not too much revolutionary to talk about here, let’s check out the overall Ryzen stack:

Depending on whether or not you want the cooler, or want to deal with overclocking, that $200 chip looks to be unbeatable at this point (based both on paper and our testing with the X version).

It’s important to note that the 3400G isn’t based on the Zen 2 architecture like the rest of the 3000-series is (excluding the even lower-end 3200G). That means that it’s not going to experience the same level of boosts as the actual Zen 2 chips, because it’s effectively a clock boosted product. Those who were looking at the 2400G but have held off can instead today buy the 3400G for $20 less and with higher peak clocks.

We’ve been a bit unlucky with the 3400G, with much more to be said about this on the final page, so if you do want to go the APU route, we suggest that you don’t settle on your particular components until you’ve verified that everything works together. We even ran into difficulties trying to reach our 3200MHz DRAM speeds, so more than the regular Ryzen platform, there seems to be more to take into consideration with these APUs.

Since we’ve covered Zen 2 to death already, there’s not much to talk about here except performance, so let’s get into that. You can check out our testing methodologies in the next page, or jump to page three to get straight to the results.