For our testing, we’re using the most up-to-date version of Ubuntu Server, with the kernel updated in all cases. On the third-gen platform, the latest 5.11 was used, although in our quick-ish testing, there were no performance differences to be seen with a move from 5.8 to 5.11. As the older 5.4 kernel ships with the latest Ubuntu Server, we felt compelled to update from that before starting.

Because we want accurate, repeatable, and the best performance possible, we always adjust the scaling governor to put the CPU profile into performance mode before any testing is kicked-off. For the Xeon Platinum platform, DDR4-2933 memory is opted for, as it’s the maximum supported for that generation (the newer third-gen series bumps that to DDR4-3200 to match EPYC), while the last-gen EPYC 7742 uses DDR4-3200 – albeit with less overall density than what we’re testing the latest EPYCs with.

All tests are run at least three times over, but in some cases, even more runs are needed for more stable results. The nature of mutli-thread tests is that they don’t always execute the same way each time, so there are occasions when a handful (or two handfuls) of runs are needed to bolster the confidence level. If we don’t include a test here that you were hoping to see, please let us know in the comments.

We’d like to give a shout out to our good friend Michael Larabel from Phoronix for helping us generate fresh numbers for the last-gen EPYC 7742, as well as Intel’s Xeon Platinum 8280. We didn’t have access to these platforms in-house, and Michael was kind enough to run our test suite on his systems so we could have more useful and relevant comparison data to share today. 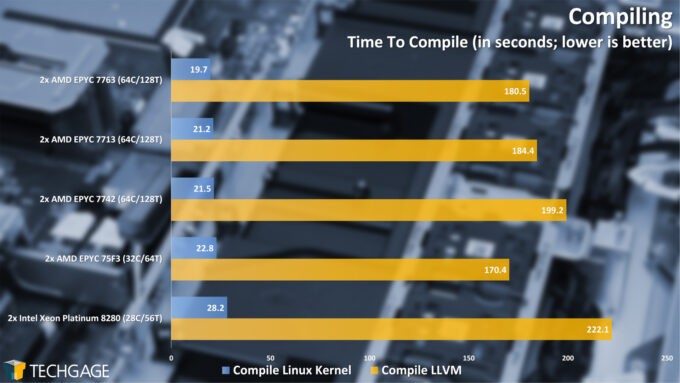 To kick off our look at the performance of AMD’s latest EPYC 7003 chips, we’ll start with a crowd favorite: compiling. It’s often thought that 3D rendering is one of the de facto best examples of how to maximize the full potential of a CPU, but compiling stands to benefit, as well. The more threads that are available to tackle individual jobs, the faster the overall compile finishes – even if the entire process doesn’t top-out a CPU’s usage like some other hardcore work could.

Prior to AMD releasing its first 32-core and higher parts, it wasn’t entirely obvious whether or not compiling would still scale with so many additional cores, but we can see here that it can, with defined gains seen moving up the stack. AMD’s new clock-focused EPYC 75F3 beats out Intel’s Xeon Platinum 8280 pretty easily, and actually outperforms the 256-thread configurations with the LLVM compile. 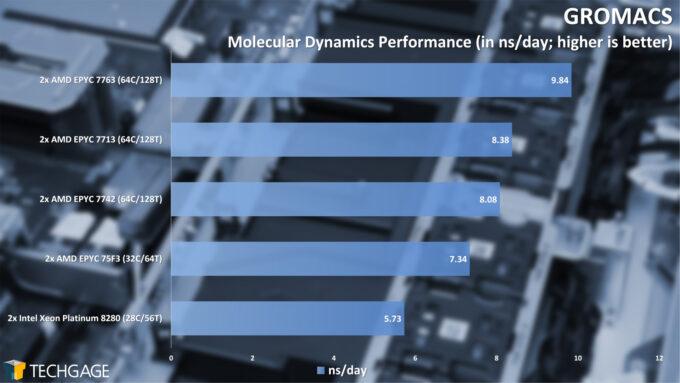 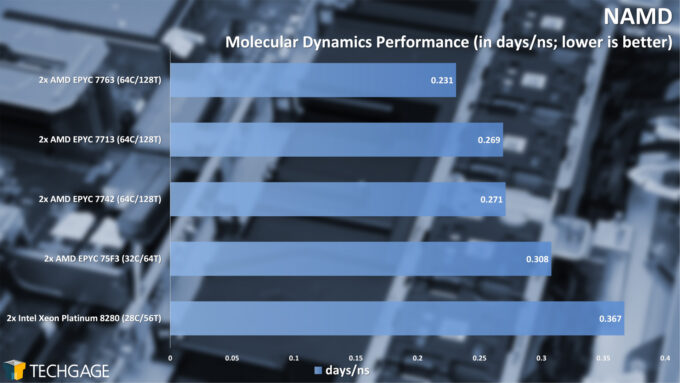 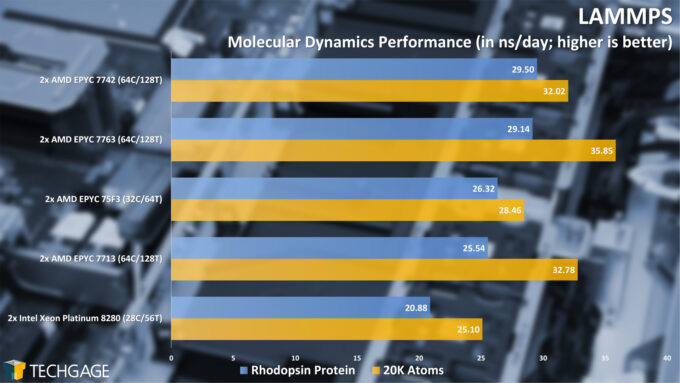 As with many other workload types, not all molecular dynamics solutions are built alike, but all of them seem to prefer having as many cores as possible to get the job done quicker. With both the NAMD and GROMACS test, the new top-end EPYC 7763 soars to the top, carving itself out a nice performance delta between itself and the last-gen 7742 and lower-power current-gen 7713.

Despite having only a handful of more cores, the dual 32-core 75F3 chips pull ahead a notable distance from Intel’s 28-core 8280s. In the LAMMPS test, the 7763 performed on par with the last-gen 7742, but made a more obvious performance impact with the 20K Atoms test. 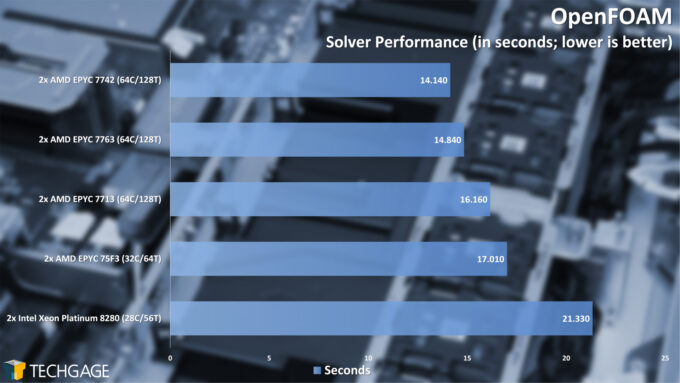 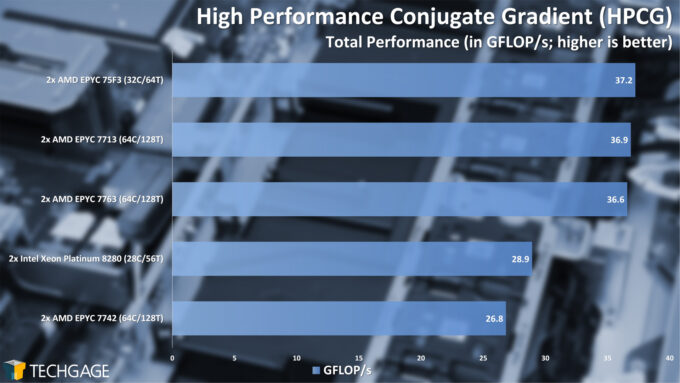 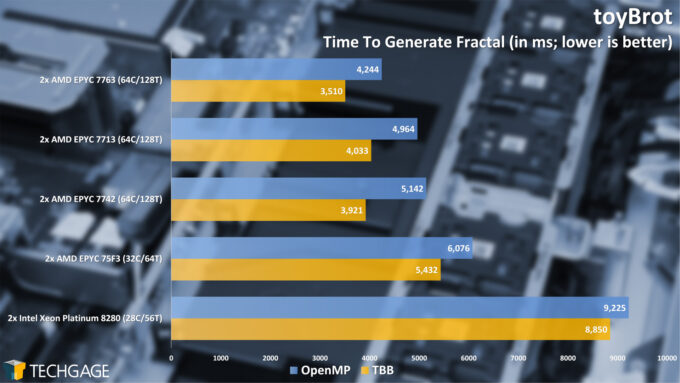 Oddly enough, the last-gen 7742 inched ahead of the new 7763 in the OpenFOAM test, although due to the more sporadic nature of many-core tests, re-running that test again next time might level them out more. As far as the interconnect HPCG test goes, all of the new chips perform about the same – but far ahead of the last-gen part.

This marks the first time we’ve run the toyBrot test, and we’re pretty pleased with the level of scaling we’re seeing there. AMD’s top 7763 soars to the top, while the 7713 sits just behind it. In our real-world use, the 7713 dual-CPU platform uses about 200W less than the 7763, so to keep up like it does is really great to see. It’s also clear as ever with a test like this that Intel could use more cores if it wants to place near the top of most of our performance charts.