It’s been said by many the past few years, but the CPU market has become really interesting since the launch of AMD’s EPYC four years ago. Despite those first-gen parts being impressive in their own right, AMD has continued to iterate nicely from gen-to-gen. The new Milan-based chips prove undeniably impressive.

As with the previous generation of EPYC chips, AMD has launched Milan with many different models to cater to the varied nature of the data center market. For cache or clock-bound workloads, the F series parts are alluring. We love that there is an eight-core option bundled with 256MB of cache, and not to mention the highest clock speed. 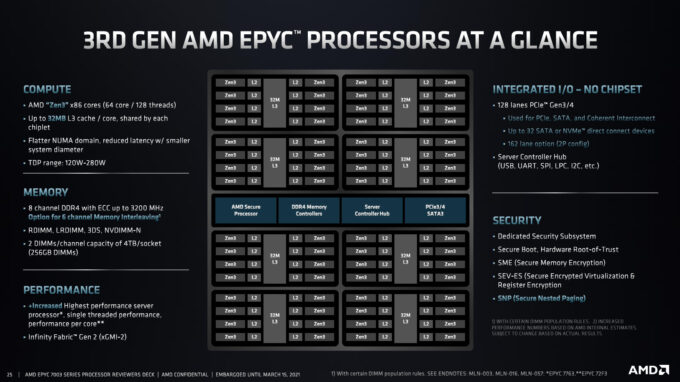 Of course, not everyone needs systems with 256 threads, so AMD offers a wide range of core counts across the entire line-up. Interestingly, there are no 12-core models this go-around, nor are there multiple eight-core options. We have seen the introduction of a 56-core model, however, which is actually pretty interesting. We can’t help but wonder if AMD was inspired to create that 7663 offering because it matches the total thread count of a top-end 2P Intel server.

Something we couldn’t help but notice right away is that the least-expensive EPYC option for this third-gen launch is $913, whereas the second-gen Rome chips started at $450. We could see AMD augment this latest line-up with less-expensive models later, but for now, it seems to be focusing on pushing its clock-targeted F series if you’re needing fewer than 16 cores. If you want low-end EPYC, you’ll need to opt for the last-gen Rome. 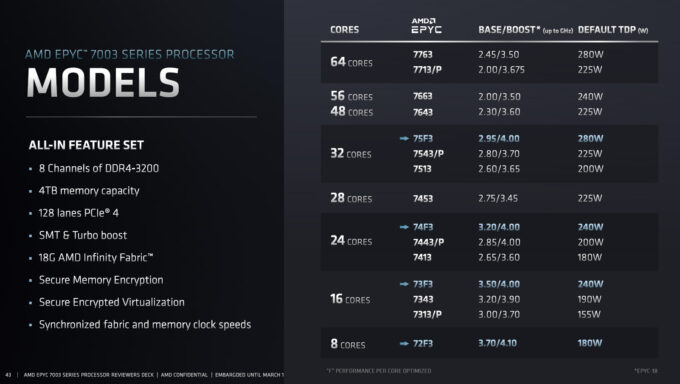 One thing worth mentioning is that this generation’s EPYC chip lineup is priced a smidgen higher than the previous generation, something that could have tariffs to thank, or the fact that AMD knows it can command a higher price for what it’s offering. It’d be hard to argue with the latter, since Intel still charges more for its top chips, despite their lower core count.

Those wanting to upgrade previous-generation EPYC platforms with the latest chips can do so with the help of firmware updates. Do note, however, that if you update your firmware for Milan support, you could possibly lose Rome support until you reflash the previous firmware. We can’t see this impacting too many, but it’s worth being aware of anyway.

The EPYC 7003 processor series becomes AMD’s second server offering to include PCIe 4.0 support, something Intel’s not going to match until its Ice Lake Xeons land later this year. With 128 lanes available to each CPU, EPYC is capable of delivering truly impressive bandwidth performance. On the topic of bandwidth, we hit 230GB/s with the memory in our Stream testing, but with tuned software, it could reach even greater heights. 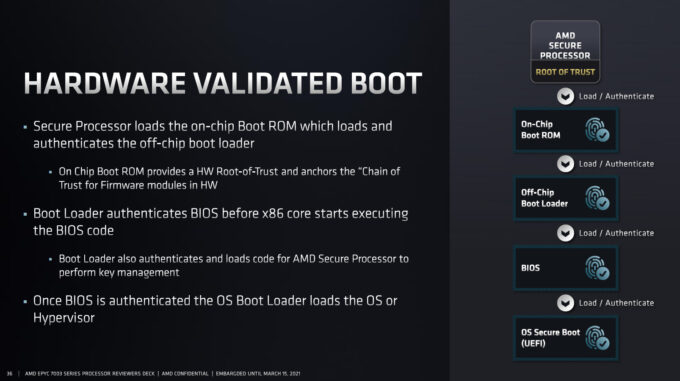 With regards to security enhancements this generation, there are not too many changes to speak about, but that’s not really a bad thing considering AMD had a great security feature set with its Rome series. What is new with this gen is Secure Nested Paging, which can protect guest instances against untrusted hypervisors. AMD’s Secure Processor makes a return this generation, allowing vendors to enable robust hardware root-of-trust to protect sensitive data from untrusted firmware or software. 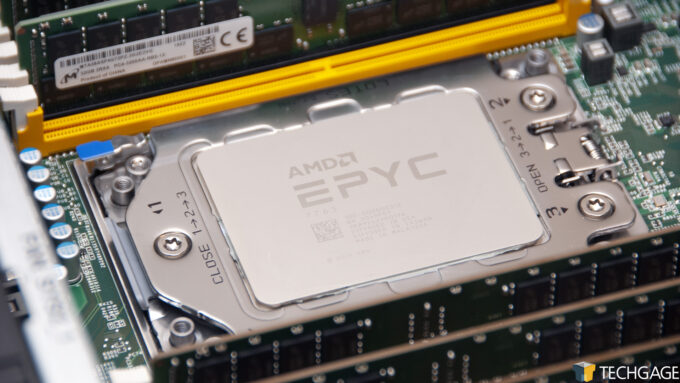 After poring over what it’s capable of, and having tested it extensively, we can say that the third-gen EPYC is really good. It’s great to see AMD’s Zen 3 architecture finally hit the enterprise, and bring better clock speeds and IPC along with it. Effectively, the fastest server processors just got faster, so there’s a lot to like about Milan.

We’re not entirely sure when Intel will be launching its next-gen Ice Lake-based Xeon Scalable processors, but with a new design, more cores, and PCIe 4.0 added in, we’re looking forward to seeing both that and this third-gen EPYC series duke it out later this year.