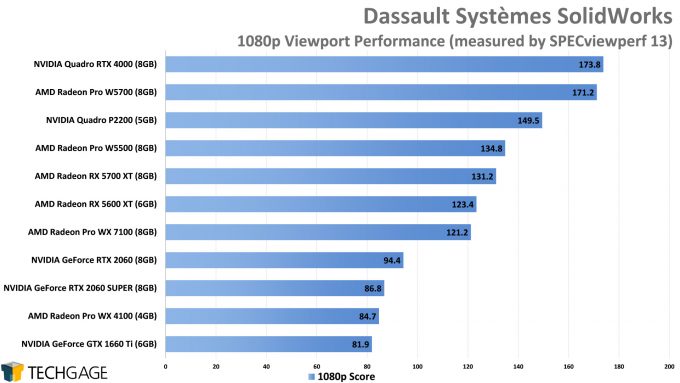 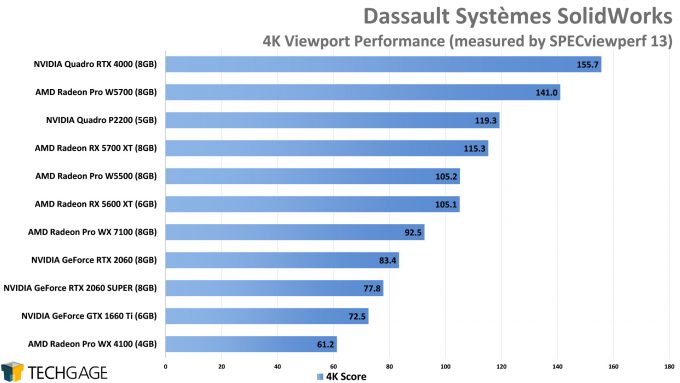 It seems like NVIDIA’s aging Quadro P2200 still has a lot of performance to give when it comes to SolidWorks. It’s tests like these that highlight the differences between gaming and workstation graphics cards quite well. Even the low-end Quadro P2200 manages to outperform AMD’s top-end Navi-based Radeon GPU. Let’s see if SolidWork’s sibling continues this sort of scaling: 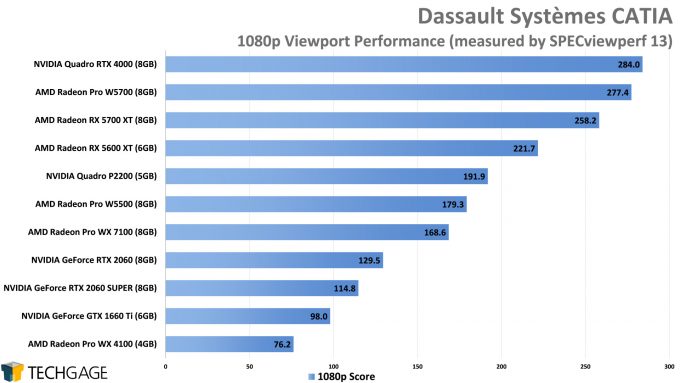 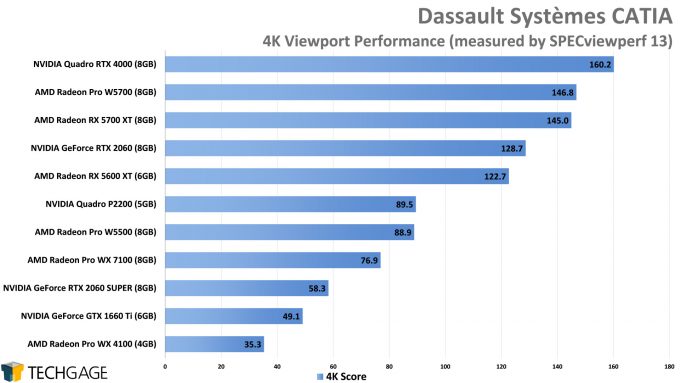 In both SolidWorks and CATIA, NVIDIA manages to take the lead in the multiple match-ups we can see, like RTX 4000 vs. W5700 and P2200 vs. W5500. What’s proven by these results is just how far workstation optimizations can go, since technically, the W5500 is the faster of the two in the match-up against P2200. That means that the rendering performance will be a little better on the RPro, so which one is right for you really depends on the weight you put on certain performance angles. 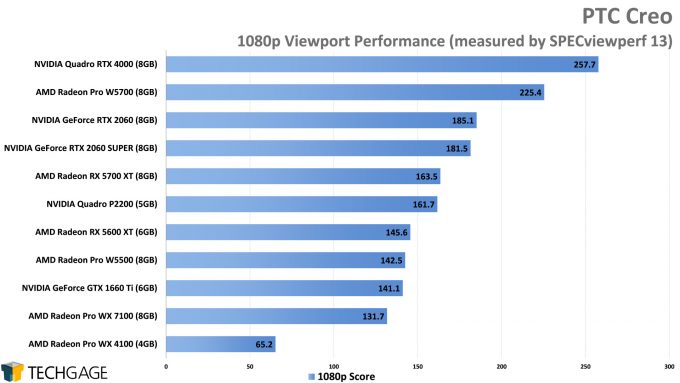 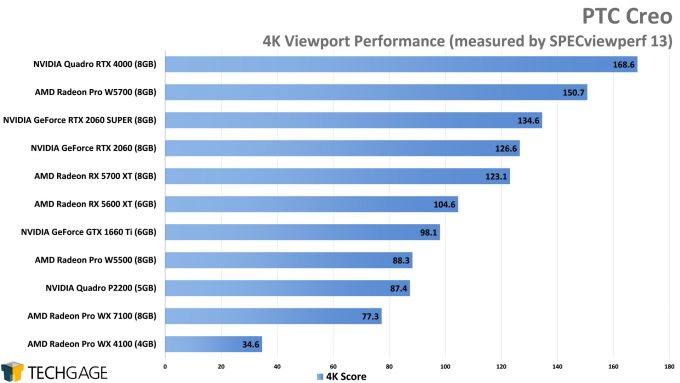 With Creo, AMD’s W5500 fell a bit behind the P2200 and even the RX 5600 XT at 1080p, but it managed to strike back at 4K, inching ahead of the P2200 ever-so-slightly. Overall, the entire stack here performs pretty well for their price-point, although we can really see just how long overdue Creo users equipped with the WX 4100 are for an upgrade. 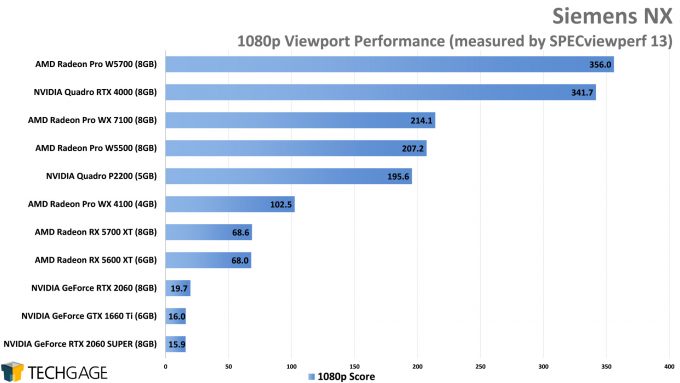 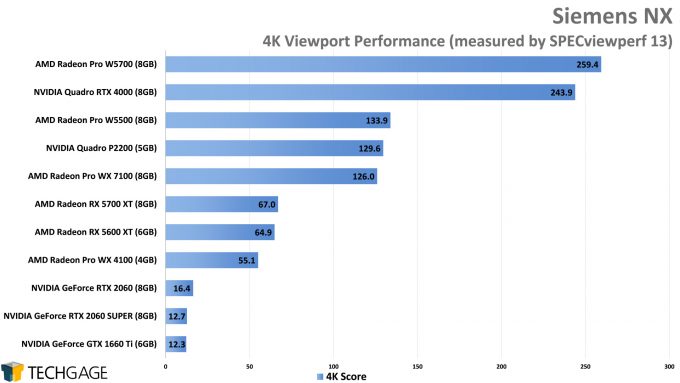 Siemens NX is a bit of a fun test, since it’s one that seems to have a seething hatred towards gaming-focused graphics cards. You may as well rule those out from the get-go. In this SNX match-up, AMD’s W5500 leaps ahead of the P2200, and at 4K, it also beats out the top-end Polaris-based RPro, WX 7100. 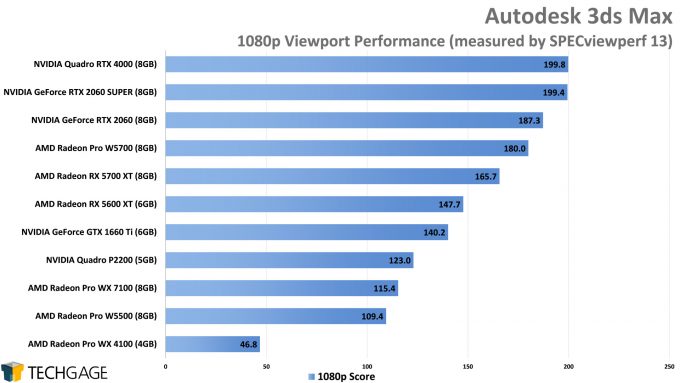 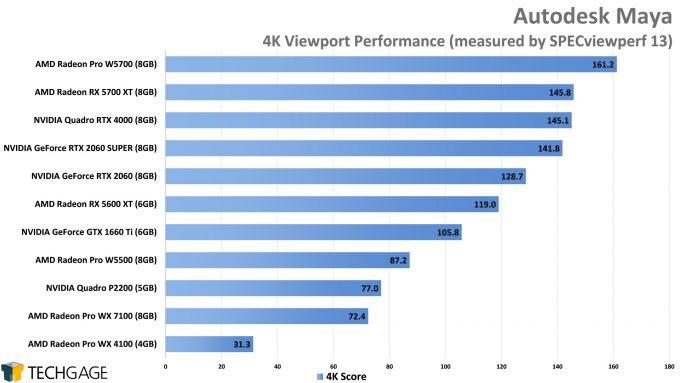 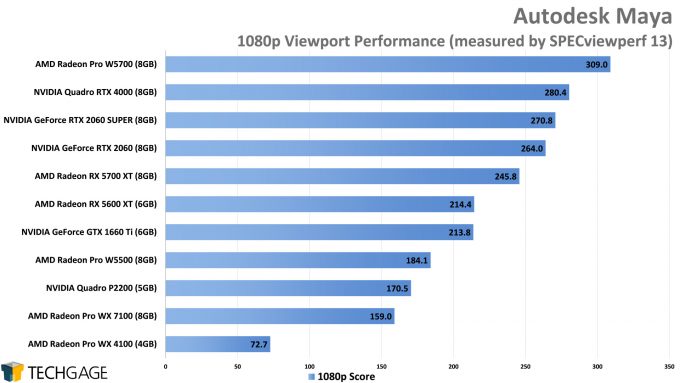 We don’t usually think of workstation GPUs having a performance advantage in either Max or Maya, but that may be changing over time. Versus the RX 5700 XT, the W5700 performs better in all tests. Oddly, though, the W5500 fell to second-last place in Max, but it overtook the P2200 in Maya. 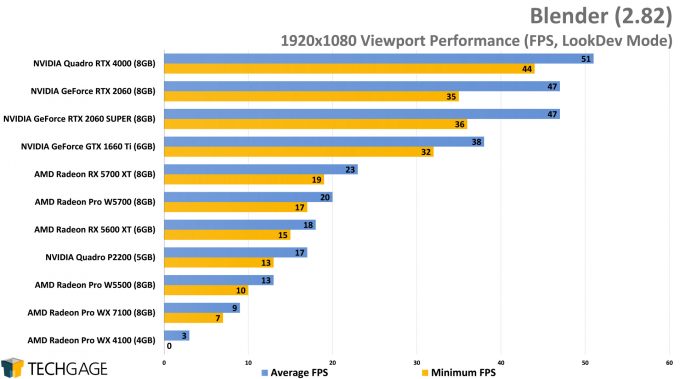 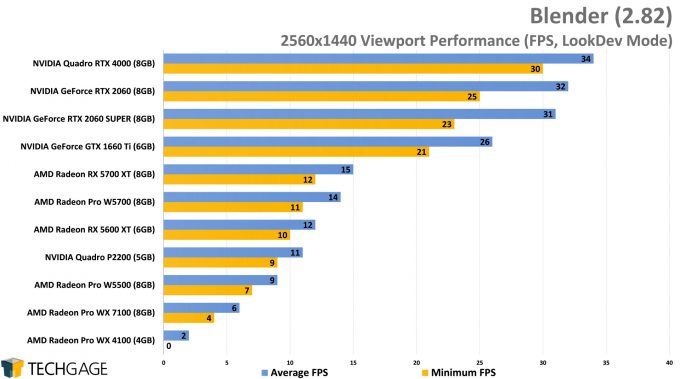 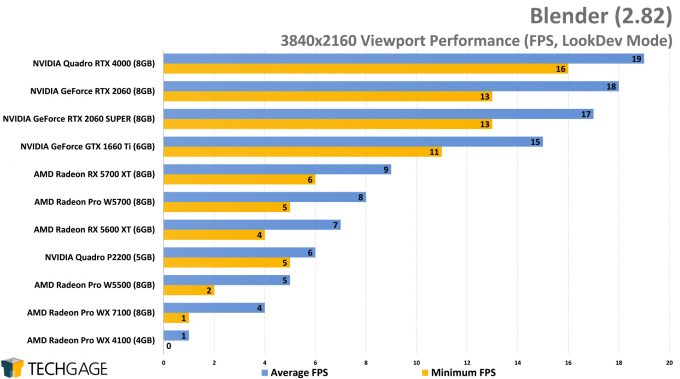 While many of the viewport tests on this page will show clear differences between gaming and workstation graphics cards, Blender is as close to neutral as it gets, offering every vendor an optimized API to use. We saw on our rendering pages that Cycles and Eevee results will show different scaling, but so too is the case with viewport results.

Overall, NVIDIA shows great strengths in our custom Blender viewport tests, to such an extent that it almost feels like the company specifically optimized Turing for it. You’ll note that even the RTX-less 1660 Ti still keeps ahead of the rest of AMD’s entire lineup. We’ll see if anything changes here with the forthcoming 2.83 build of Blender.