Different tasks will vary how a graphics card is used, which means that some workloads will draw more power (and generate more heat) than others. It’s safe to say that more often than not, a gaming test is going to push a graphics card the hardest, outside of using a power virus like Furmark.

For the power testing in this article, we rendered the Classroom scene in Blender with a huge number of iterations to generate that result, and then ran a 3DMark Fire Strike loop to see how much further power draw could go. The reported wattages were measured through a Kill-a-Watt, which has only the tower PC plugged into it. Both the rendering and gaming tests run for ten minutes. Temperature monitoring is done with AIDA64, with a room temp as close to 23°C as possible. 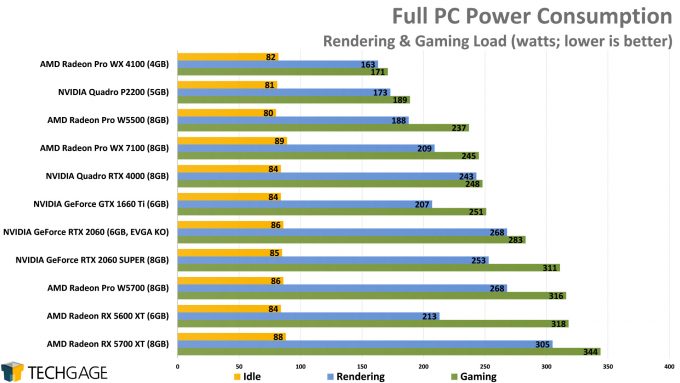 As we’d expect, gaming pushes all of these GPUs a lot harder than rendering, with the RX 5600 XT in particular showing a notable delta. It’s a great thing that rendering doesn’t use the same power as gaming, or else many workstations would be a lot louder – and hotter. Speaking of heat: 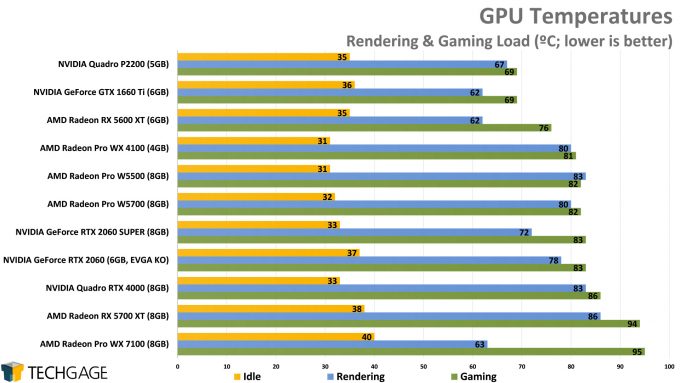 Almost the entire stack here can hit 80°C without much effort; it just requires a good stress. Thankfully, that’s all within spec; you only really need to be concerned if it reaches temperatures above 90°, especially since that can really start to increase heat in other parts of the system.

AMD’s Radeon Pro W5500 is an attractive ProViz graphics card from multiple angles. For starters, it’s a $399 option that packs an 8GB framebuffer. By comparison, you’ll need to opt for NVIDIA’s $899 Quadro RTX 4000 to get that much memory on the pro-side. The Quadro P2200, which is most closely matched against the W5500, has only 5GB of VRAM. That’s yet another reason why we feel NVIDIA’s 2000-series is due for an update.

The W5500 is an especially great card for CAD users, namely those using suites that directly see performance and general optimizations on workstation cards. We’re largely talking Siemens NX, CATIA, SolidWorks, and Creo, but that’s only of those we tested (through SPECviewperf). If your primary use is a solution like AutoCAD, and you don’t care about gaming performance, then we’d always suggest a pro card over a gaming one, especially since the price-point to get quality performance is more palatable than it is for those who need top-end render or denoising performance.

The fact that the W5500 is a single-slot and single-connector card will also make it attractive to those who for one reason or another can’t or would prefer to not use a dual-slot GPU. To get a dual-slot GPU from Radeon Pro anyway, you’d be moving up to the Vega-based WX 8200 or Pro VII. The only thing that would make us happier about the W5500’s design would be if it could be shortened to fit in a small form-factor PC – such as the Intel Quartz Canyon NUC we recently wrote about.

What’s nice to see is the generational gains delivered from the Navi update. The current-gen W5500 at $399 performs a lot better in most cases than the then-$799 WX 7100 from three-and-a-half years ago. It also does it with a wee bit less power use overall.

It’s also worth pointing out that AMD’s graphics software has improved quite a bit over the years, and the current iteration is really robust. Of note, it offers support for AMD Remote Workstation, which as it sounds, allows you to access your physical rig from anywhere – assuming you have a sufficient enough internet connection. In the past couple of months, interest in remote work has really surged, so it’s good that AMD is already delivering a certified (Citrix and Microsoft) solution.