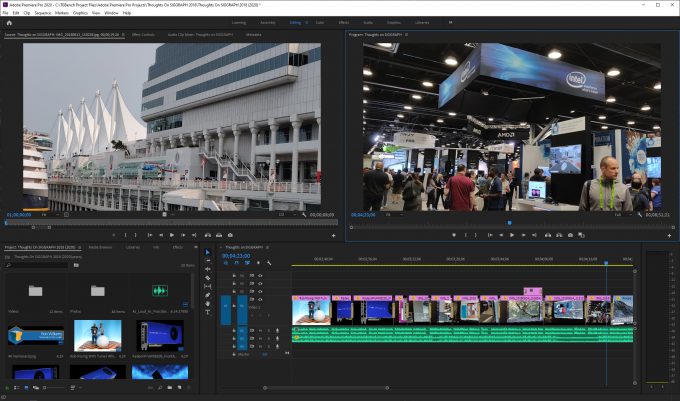 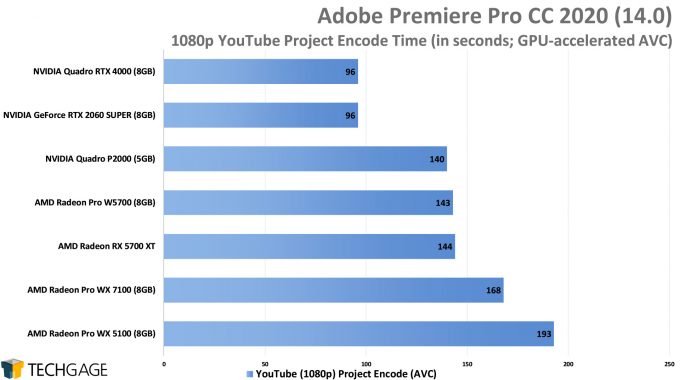 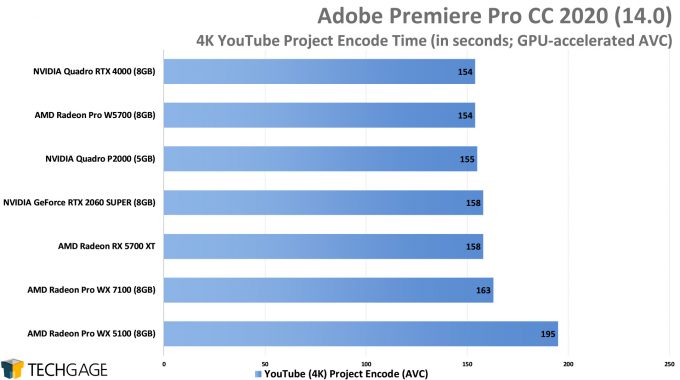 The projects used for our Premiere Pro testing are not the most complicated, but they do reflect real videos that have made it to our YouTube channel. Despite both being fairly similar in design, with similar effects used, but we can clearly see that they behave pretty differently overall. In the 1080p test, NVIDIA claims the top two spots, with the W5700 actually falling behind the last-gen NVIDIA Quadro P2000.

We’re not sure why AMD’s fallen behind in the 1080p test, but the 4K one reflects a much better impression overall, tying the lead with the Quadro RTX 4000. Part of these issues can simply be explained by the erratic behavior of Adobe products at times.

Since the last workstation GPU review, we’ve updated some of our tests, including Premiere Pro. The charts below reflect codec performance for AVC, RED, and ProRes, each of which are encoded to AVC and HEVC. We plan to bring similar tests into DaVinci Resolve soon and begin publishing regular results for that. But alas, let’s first continue with the topic at hand: 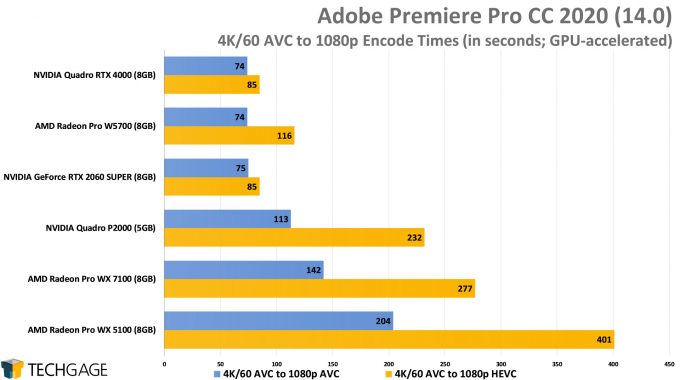 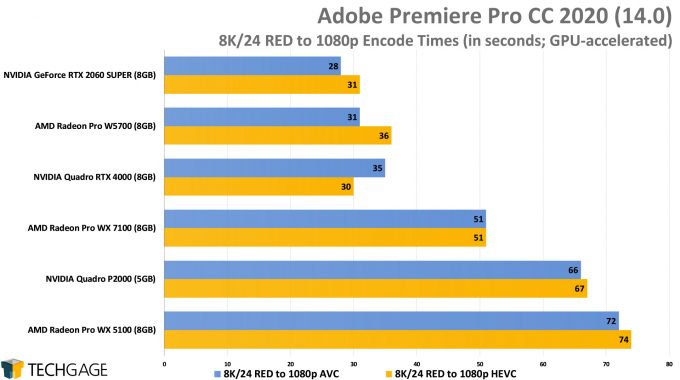 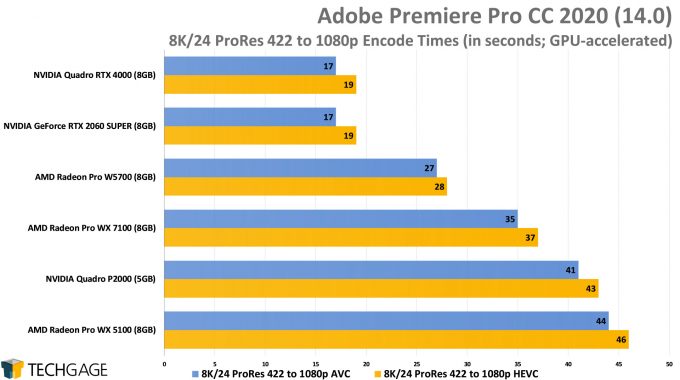 First and foremost, the RX 5700 XT doesn’t appear in these charts because the computer would blue screen each and every attempt – even after a hardware and driver reinstall. We’re not sure what the deal is, but we’ve stopped being surprised by these anomalies. We’ll just revisit before the next ProViz article.

Looking at these results, we’re left wondering why we waited so long to add them. They have far more interesting scaling than the project encodes do, and they shake things up quite a bit depending on the test and target codec. With AVC as a source, the Radeon Pro W5700 and Quadro RTX 4000 share the same performance when encoding to AVC, with the HEVC nod leaning in NVIDIA’s favor.

We can draw a couple of simple conclusions from the other results. NVIDIA’s HEVC encode performance exceeds AMD’s in every case, but AVC performance is similar… in all but ProRes. That encoder clearly likes the Turing GPUs quite a bit. 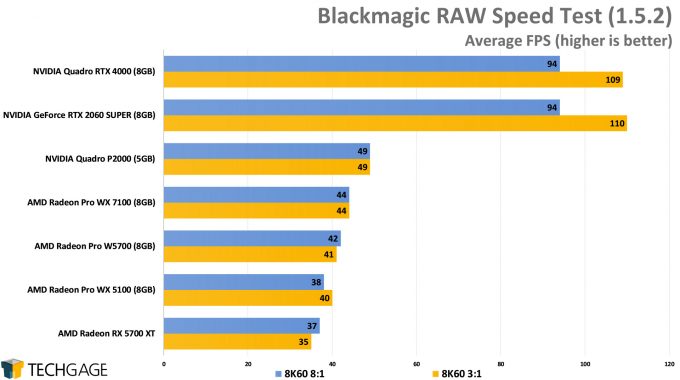 With Blackmagic’s recently released RAW Speed Test benchmark, we’re seeing completely different levels of performance between AMD and NVIDIA hardware, which is a bit odd since AMD definitely optimizes for Resolve workflows. As mentioned above, we’ll be adding Resolve to our suite at some point soon, so we’ll see if our real-world results match up with the above. 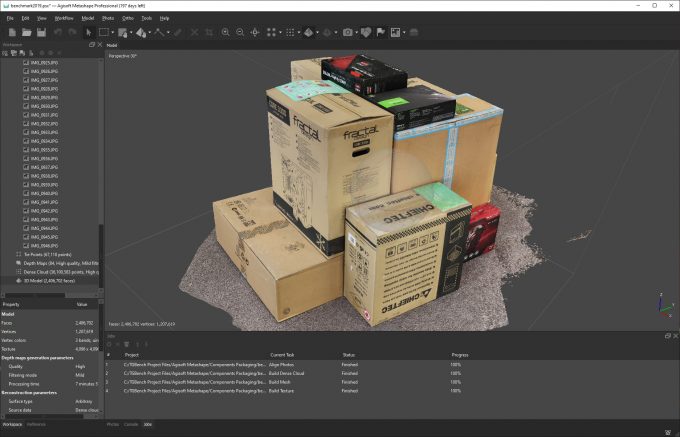 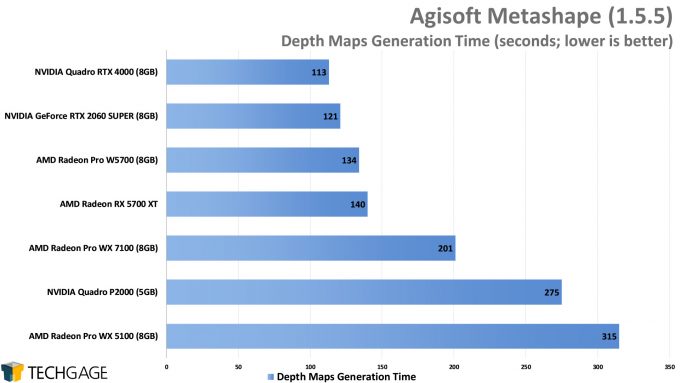 Metashape can use the GPU during multiple stages of building the project, but the depths maps generation is when it’s used to best effect, and where it will scale the best. The RTX 4000 again takes the lead here, but that’s not the most interesting thing about these results. Despite its fewer cores, the W5700 once again outperformed the RX 5700 XT.