We’re going to kick off our Radeon Pro W6400 performance look with workloads that the card is squarely focused on: viewport. When doing any designing, viewport performance is crucial, because no one wants to work inside of a viewport that skips or stutters – it’s a nuisance, and impedes efficiency. Fortunately, the W6400 is optimized for the industry’s most popular CAD viewports, some of which we’ll see below: 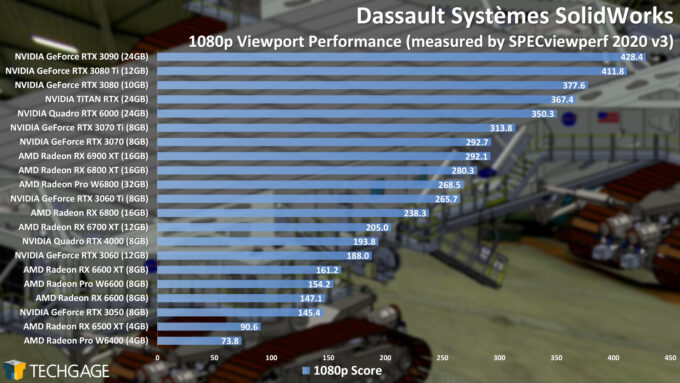 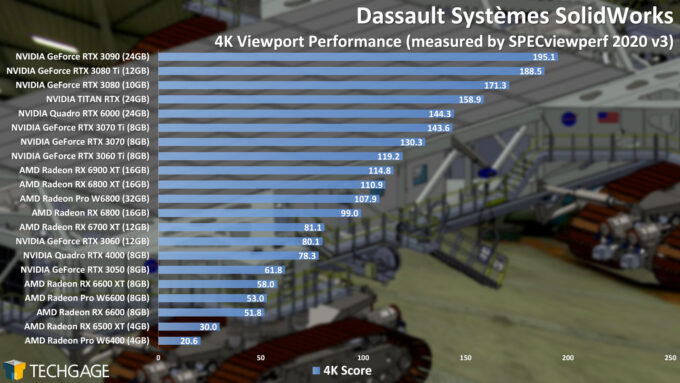 As far as high-end CAD suites go, SolidWorks is fairly neutral in terms of performance optimizations. For the most part, a gaming version of a workstation graphics card will perform roughly the same, although that’s not to say that there won’t be other optimizations that are not reflected in a simple benchmark. In any event, the Radeon Pro W6400 sits at the bottom of both resolution charts, with 4K proving particularly grueling. Let’s see how CATIA fares: 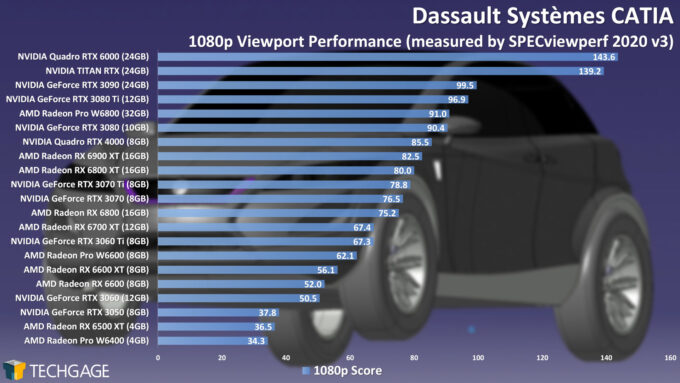 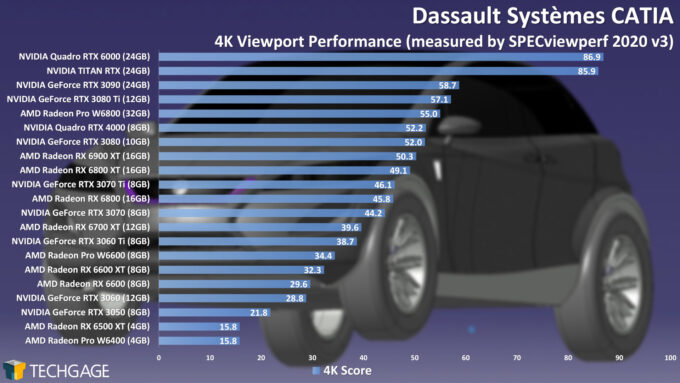 The scaling seen in our CATIA results are not quite as pronounced as they were with SolidWorks, although as another fairly neutral piece of software, the workstation prowess of the W6400 doesn’t help it place better than the bottom rung. Interestingly, we see notable gains from AMD’s and NVIDIA’s workstation GPUs – compare the 75.2 1080p score of the Radeon RX 6800 to the 91.0 score of the Radeon Pro W6800. 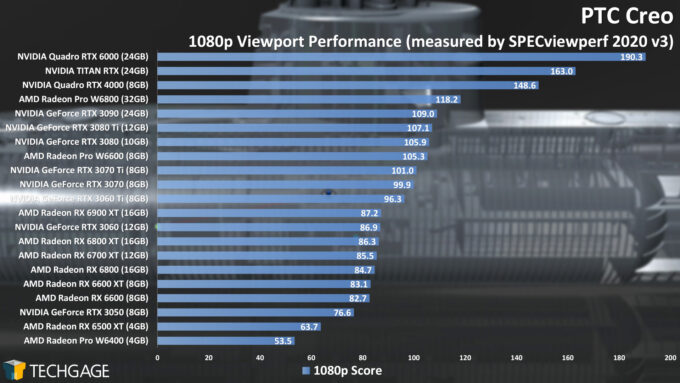 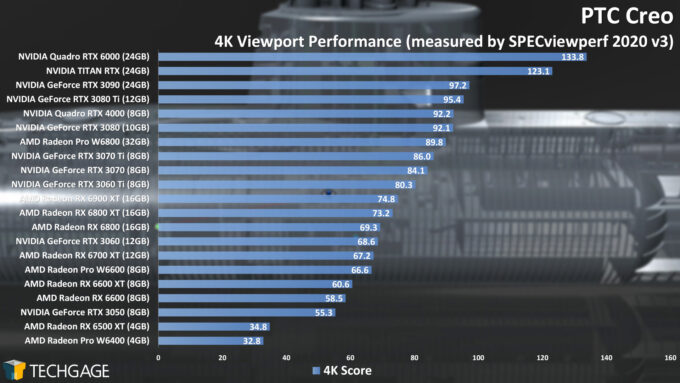 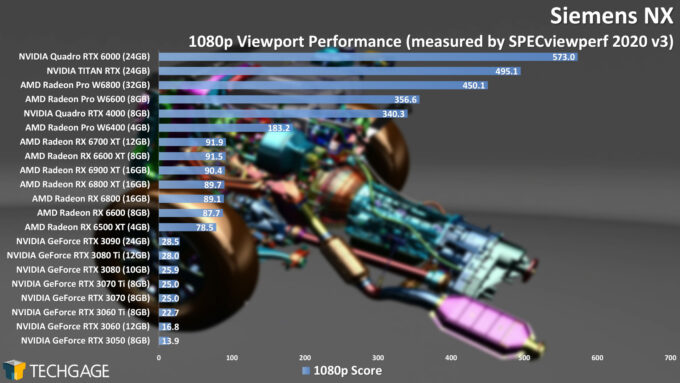 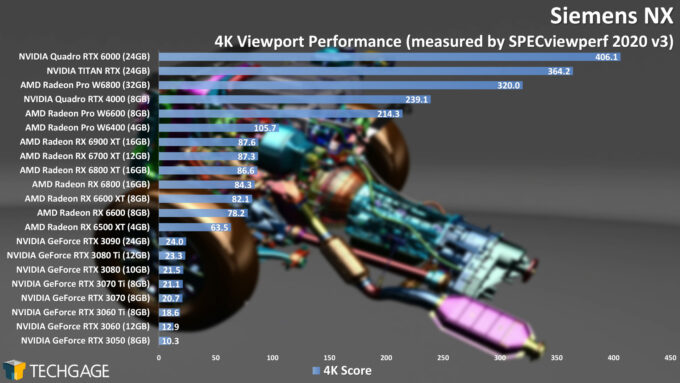 Siemens NX offers the most hardcore anti-gaming GPU stance of any software we test, which finally allows a GPU like the Radeon Pro W6400 to sit much higher than the bottom. Because of the optimization seen here from the workstation cards, it’s clear as day that if you’re an SNX user, you absolutely need a professional GPU if you want to have a great experience.

Take a moment to enjoy these graphs, in which the lowly 4GB W6400 places ahead of the top-end 16GB 6900 XT. You don’t see that kind of result every day. 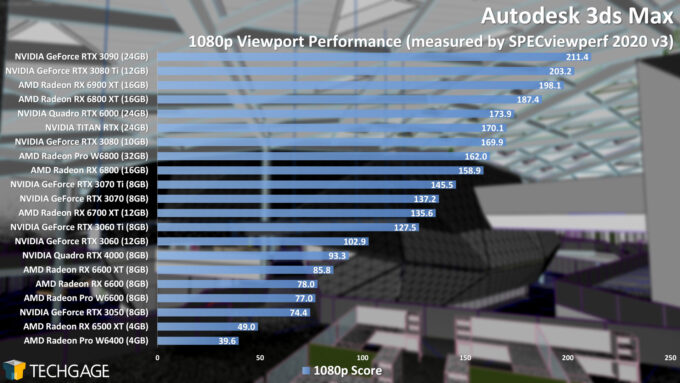 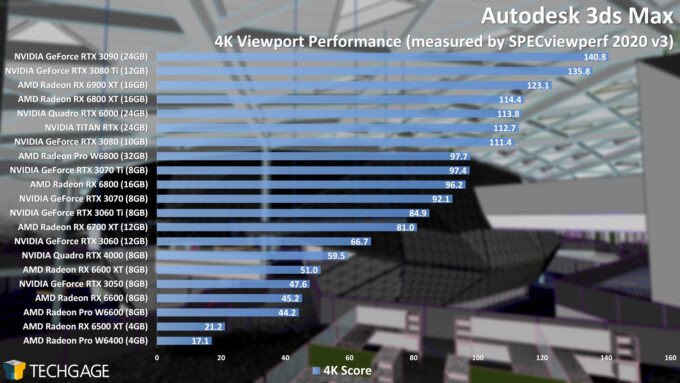 With 3ds Max, we’re returning to what we’ve seen from most of these test results, with the W6400 sitting behind the entire crowd. The more we see the W6400 place just behind the RX 6500 XT, the more we wish that this review revolved around W6500 instead. At the same time, AMD probably sees the $229 price point as being more attractive right now. 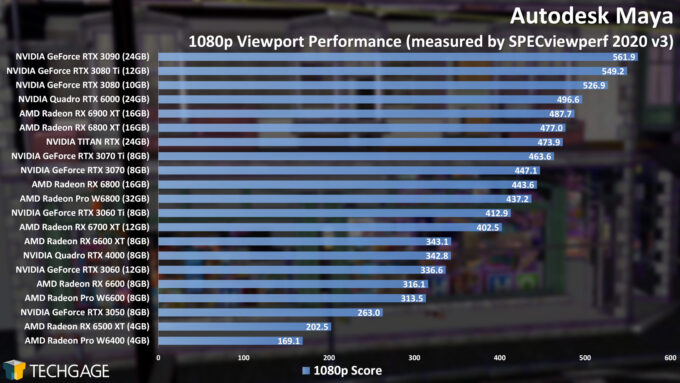 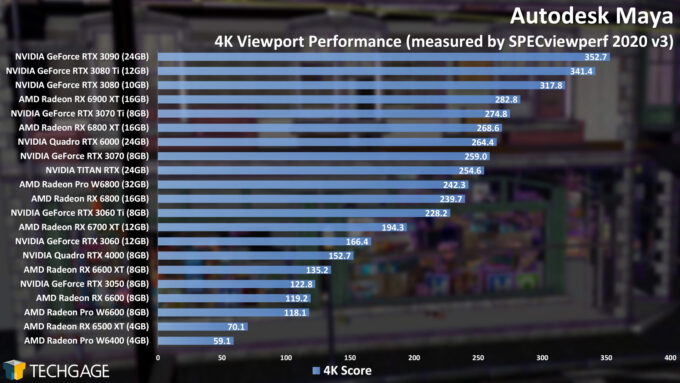 Maya continues the theme that’s been established earlier, with the low-profile W6400 barely able to see over the head of the RX 6500 XT. As with some of the other tests featured on this page, Maya is neutral towards gaming GPUs, easily evidenced when you compare the likes of W6600 and RX 6600. 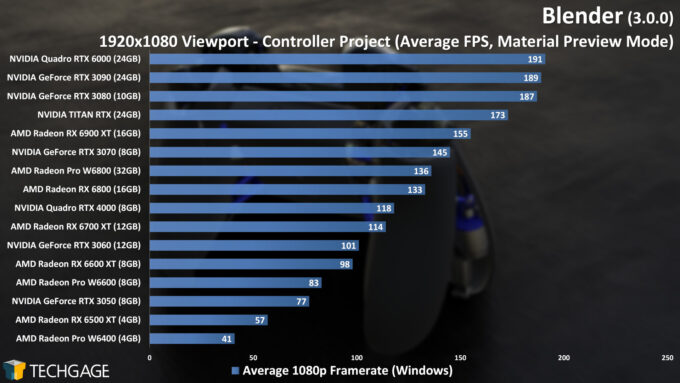 We saw earlier that the W6400 shouldn’t be heavily counted on for rendering workloads, but where the viewport is concerned, it delivers really solid performance for its price-point, and technical makeup. The Controller project we use looks great, and yet the W6400 managed 41 FPS at 1080p, where the viewport hogs the vast majority of the interface.

Please note that the above material preview test was run at 1080p, while the following wireframe and solid modes were tested at 4K: 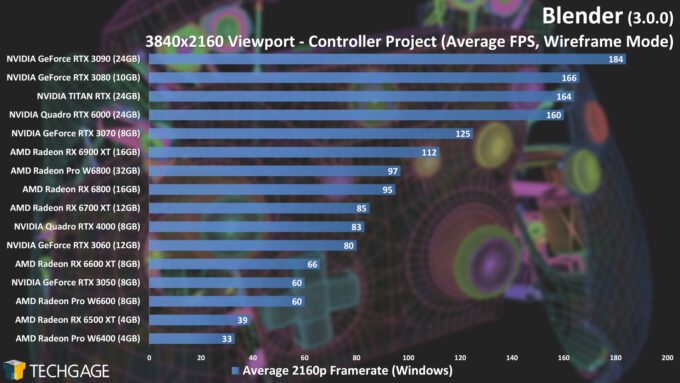 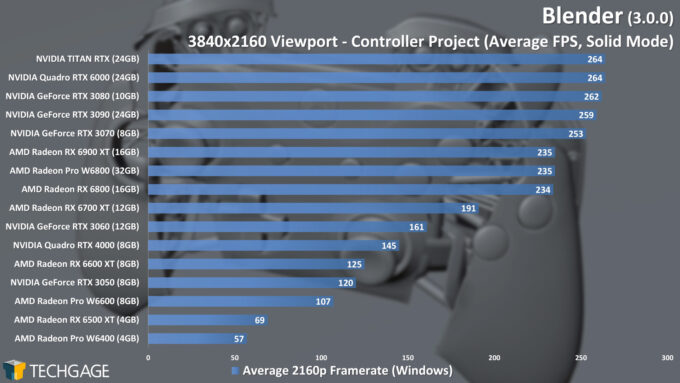 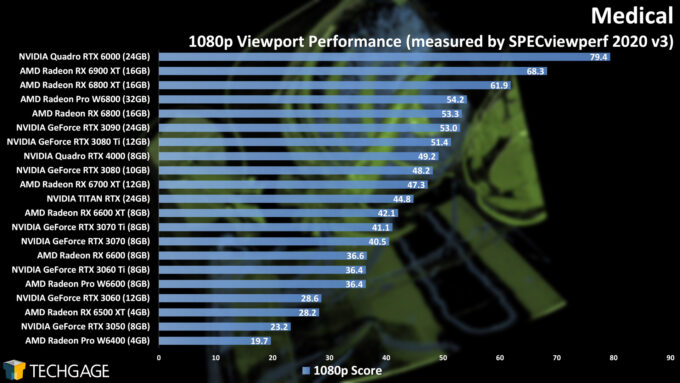 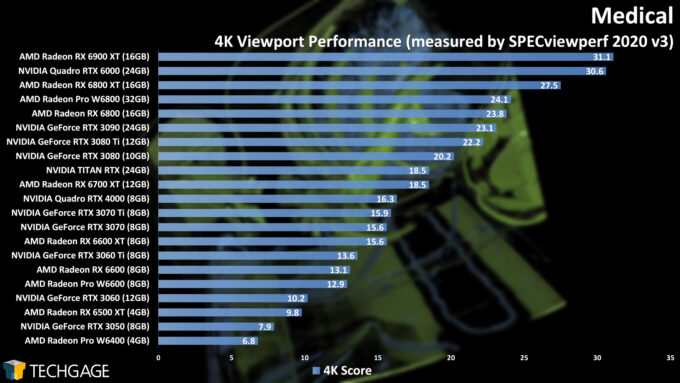 The Medical test doesn’t seem to benefit much from workstation card optimizations, but Radeon on the whole seems to perform better than GeForce/Quadro at respective price-points. We see the W6400 sitting in the back, once again, but only just behind the RTX 3050. Somehow, the RX 6500 XT manages to outpace the RTX 3050, despite the latter being technically more capable, with a frame buffer twice the size of those Radeons. 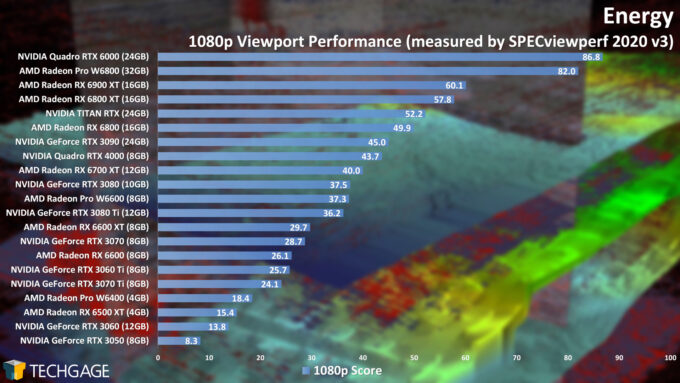 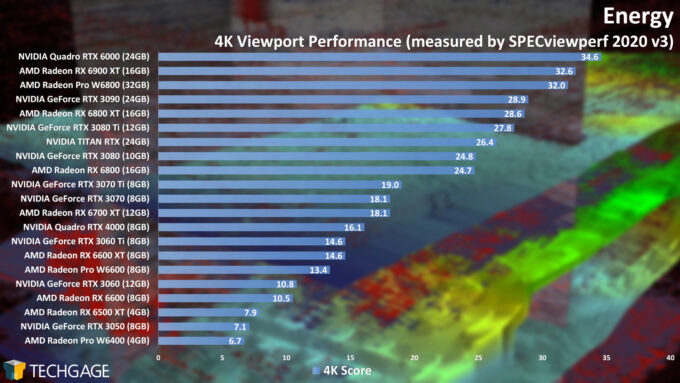 Unlike the Medical test, Energy will take good advantage of workstation-optimized GPUs, with AMD’s Radeon Pro W6800 soaring to the top, sharing space with the Quadro RTX 6000. While we didn’t see it happen at 4K, we see the W6400 place ahead of the RX 6500 XT at 1080p. Granted, we’re doubtful anyone will use a card like the W6400 for serious data-heavy viewport work like this, but it’s still great to see optimizations shining through.