We’re now going to shift our W6400 performance focus towards rendering workloads. However, we must stress that rendering is not a target scenario of this card, unless we’re talking simpler 3D projects. We could have likely focused this article entirely on viewport testing, but we wanted to be thorough, and truly show you what the card is capable of in all common scenarios. 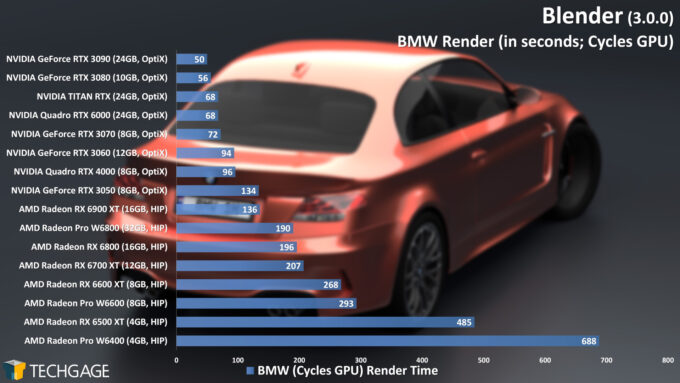 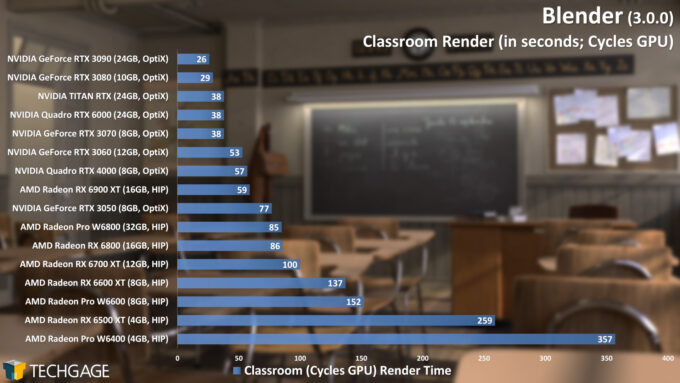 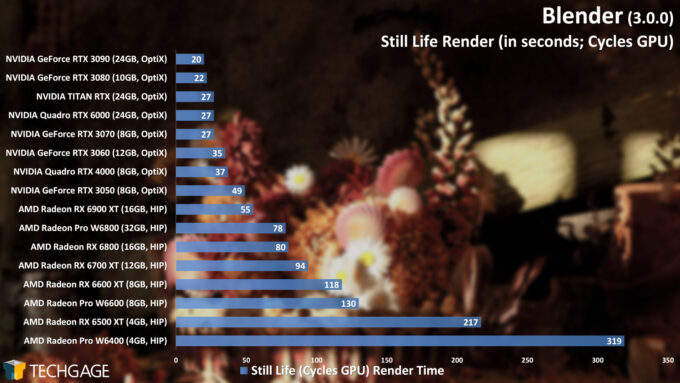 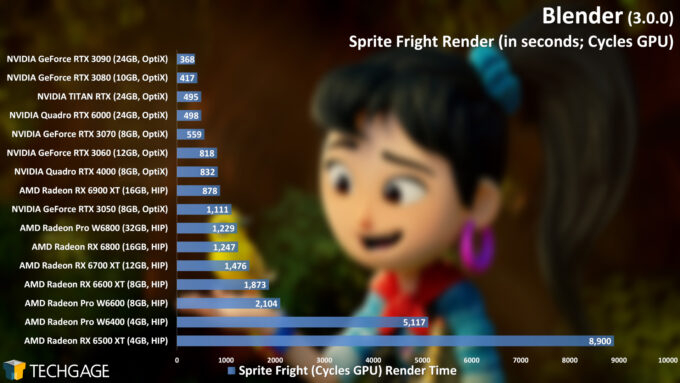 We can glean pretty quickly from these results that the Radeon Pro W6400 shouldn’t be expected to tear through rendering projects. If you care about rendering performance at all, we’d heavily encourage considering splurging for the W6600 instead, or adding a second (gaming) GPU that can be used for dedicated rendering, allowing the workstation GPU to focus squarely on design workloads.

The most interesting result above is with Sprite Fright, a project we weren’t even originally planning to test, because it’s a beefy project outside the scope of what you’d expect a $229 professional GPU to deal with. Somehow, the technically less powerful W6400 placed ahead of the RX 6500 XT, something that was reiterated in subsequent sanity checking. Somehow, the W6400 managed to handle resources well enough to prove faster with that project, while it failed to do the same with the much less complex projects that came before it.

Our EEVEE projects are much less strenuous than our Cycles ones, so the scaling is far more kind to a GPU like the W6400: 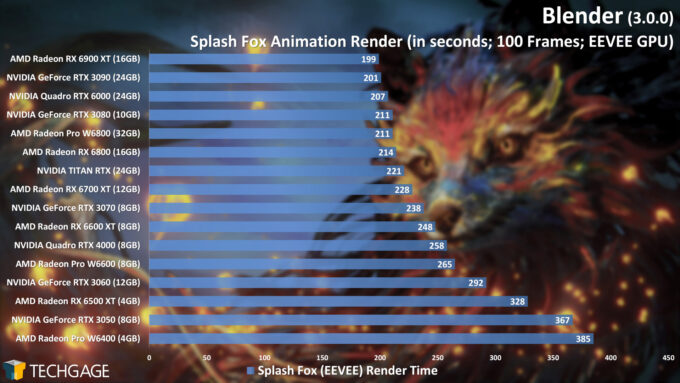 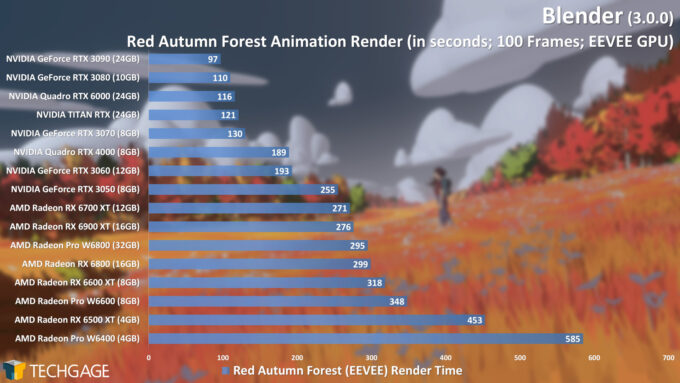 The scaling with the Splash Fox project isn’t interesting, and that’s because its rendering involves the CPU about as much as the GPU; all of these interment steps that wait on the CPU reduce the chance of notable scaling. Red Autumn Forest, meanwhile, is the opposite: the CPU is barely utilized, allowing for much more impressive scaling.

Cycles and EEVEE are not the only render engines on the block; let’s check out AMD’s own Radeon ProRender next: 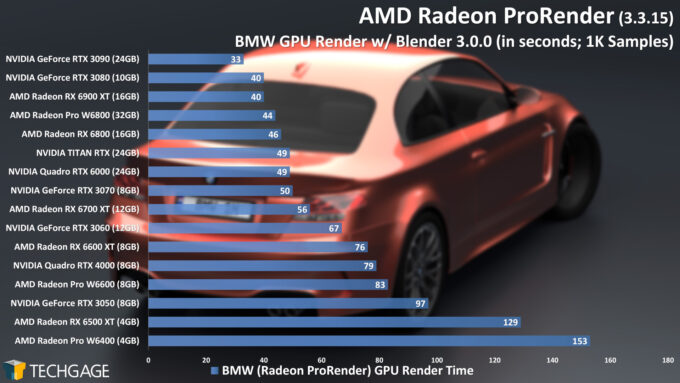 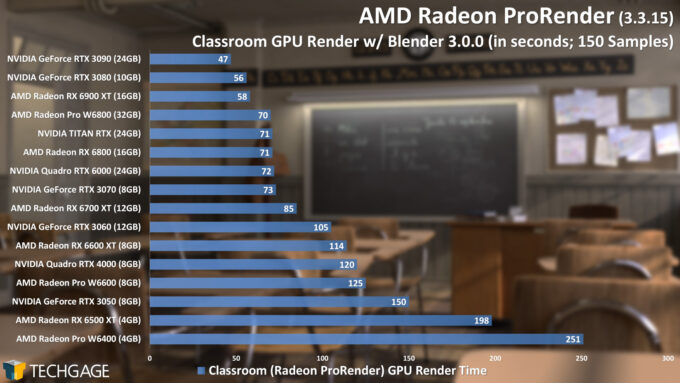 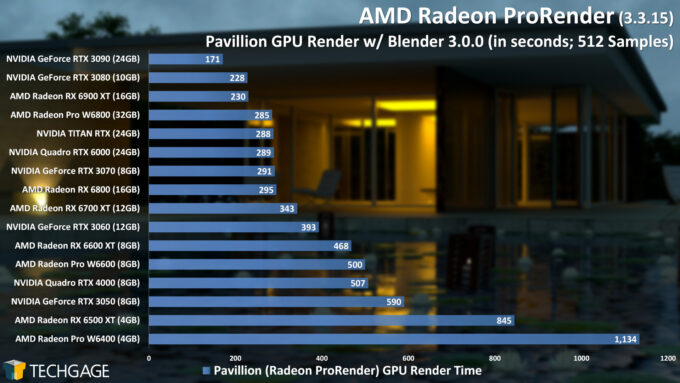 Interestingly, the scaling for a GPU like the W6400 is much more complementary with RPR than it is the other render engines we tested. Clearly, the W6400 is still not a rendering powerhouse; if rendering is really important to you, you owe it to yourself to opt for a faster option. 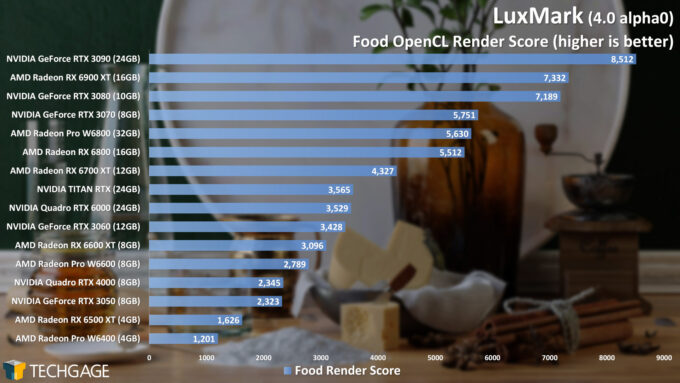 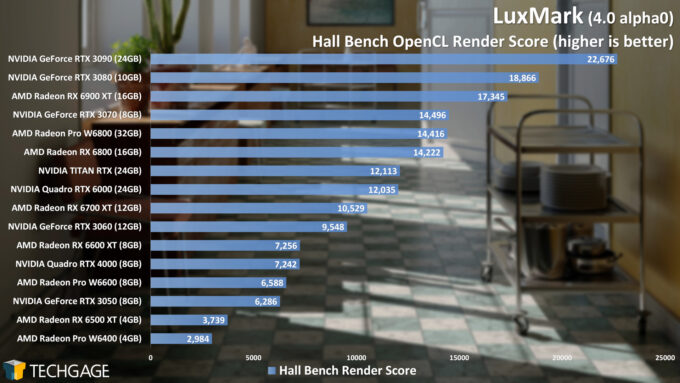 LuxMark helps wrap up our rendering look, effectively repeating what we’ve seen so far from the others.