As mentioned earlier in the article, AMD’s Radeon Pro W6400 lacks a dedicated hardware video encoder, which means encoding a video won’t be as fast as it could be. Thankfully, though, there are solutions out there that will still encode video using this GPU; it’s just that all of the work will be relegated to the GPU cores, rather than a dedicated hardware encoder.

In our testing, Adobe’s Premiere Pro used the W6400 for encoding without issue, not even spawning a warning of a missing accelerated encoder. The Blackmagic Design RAW Speed Test is another that handles the lack of encoder gracefully, although we admit we didn’t give DaVinci Resolve a separate test. VEGAS Pro is the lone solution tested so far that outright refused to encode with the W6400, so that’s the reason for the lack of related results here. 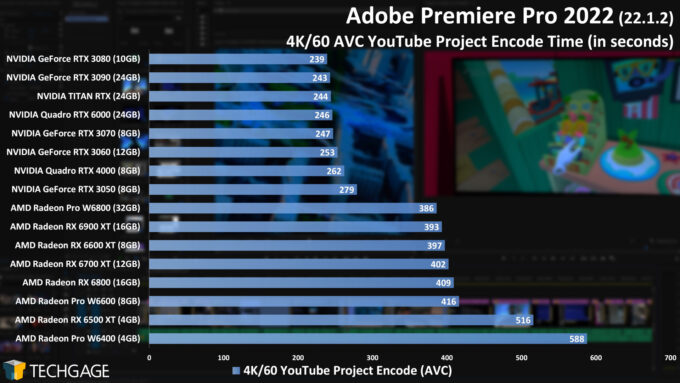 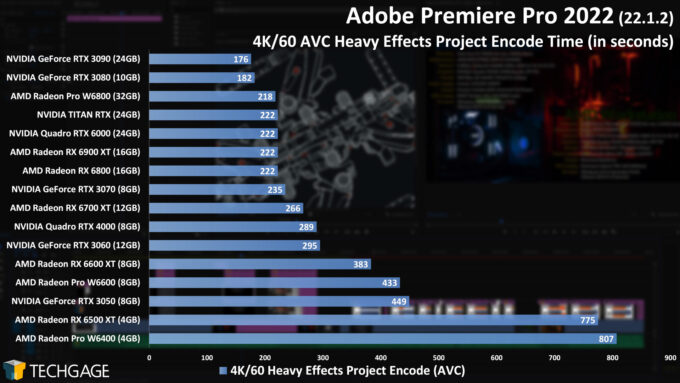 With the lack of an accelerated video encoder, we have to admit that we were genuinely impressed with the performance we saw out of the W6400 – even if it still manages to place dead last. In fact, based on the performance seen vs. the next models above the W6400 and RX 6500 XT, you’d barely be able to tell it’s even missing an accelerated encoder. In the second test above, focused on heavy effects (in effect making it similar to 3D rendering), both of those aforementioned cards sat far back from the others. 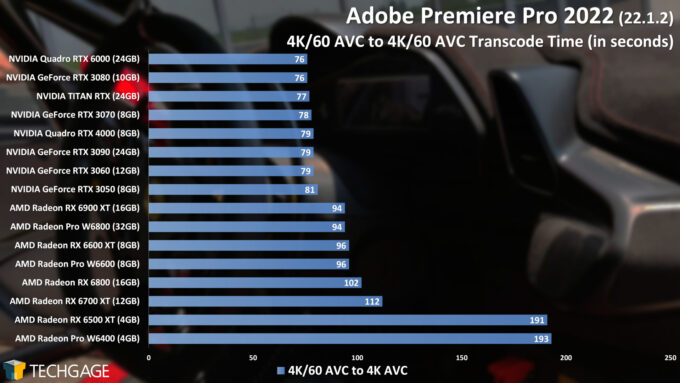 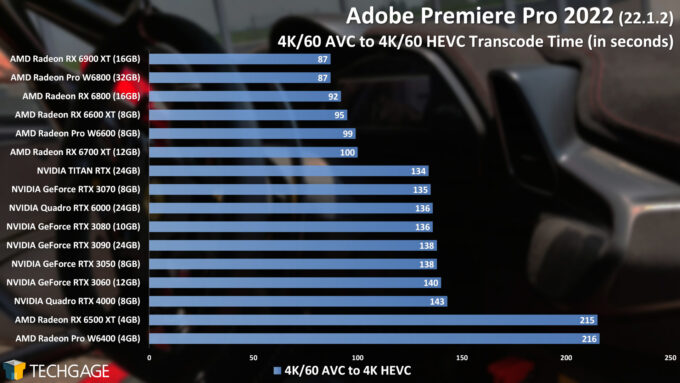 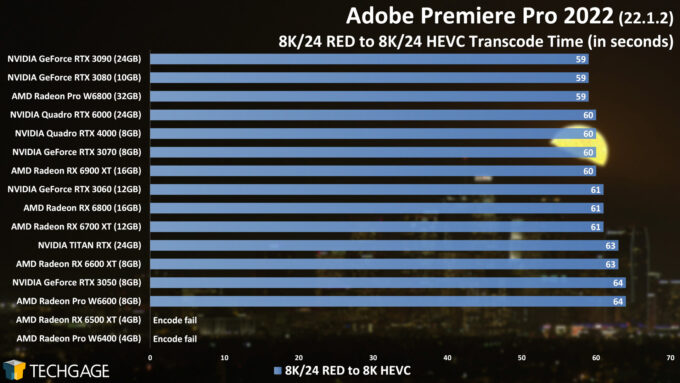 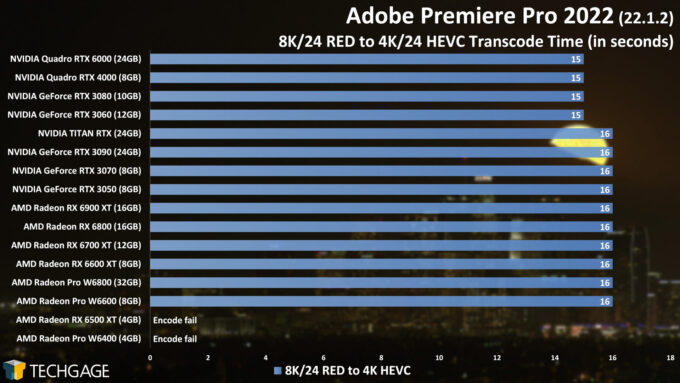 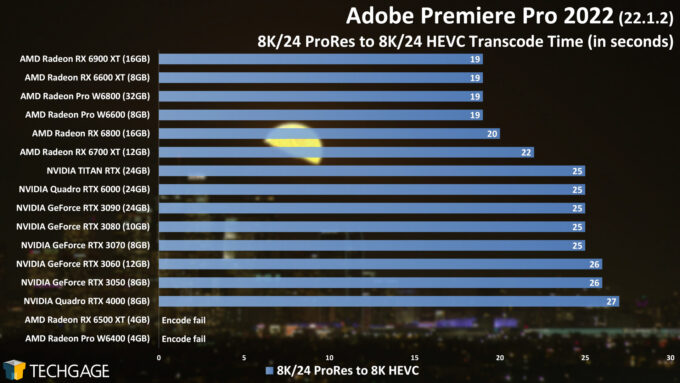 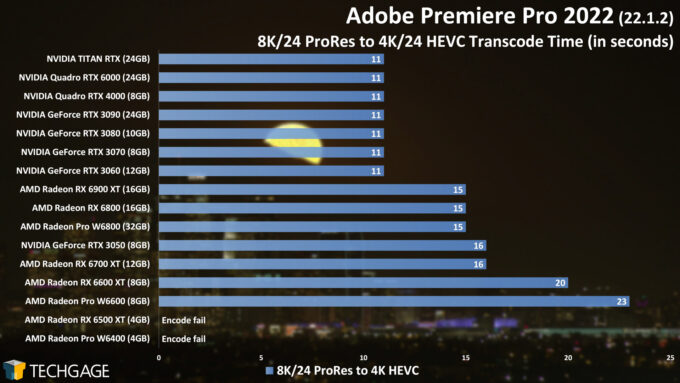 Both the W6400 and RX 6500 XT failed their final tests, but that’s something that would have likely happened even with an accelerated video encoder, as 4GB is simply not a large enough frame buffer for such data-hungry projects. Ultimately, the W6400 isn’t ideal for video encoding, but it should work in a pinch – assuming you’re using software that will ignore the lack of a hardware encoder. 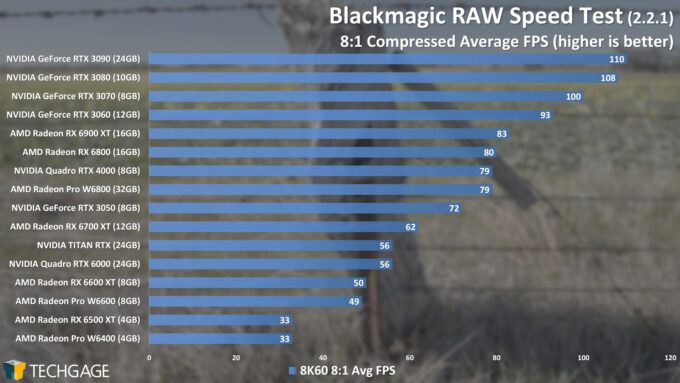 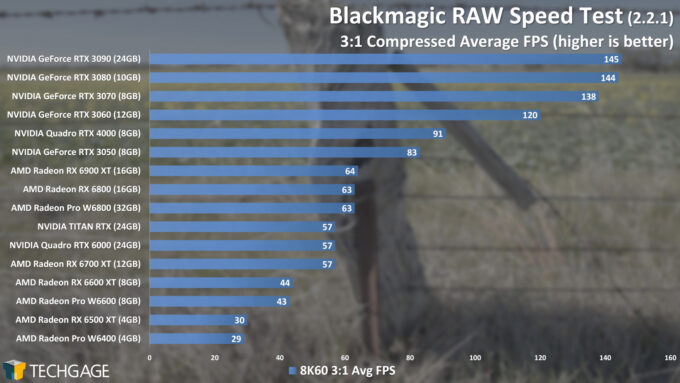 As mentioned before, with the lack of a hardware video encoder, we assumed a card like the W6400 would prevent us from having any encode results at all, but thankfully that isn’t the case. Even the BRAW Speed Test utilized the card no problem, delivering pretty respectable results, given its specs. 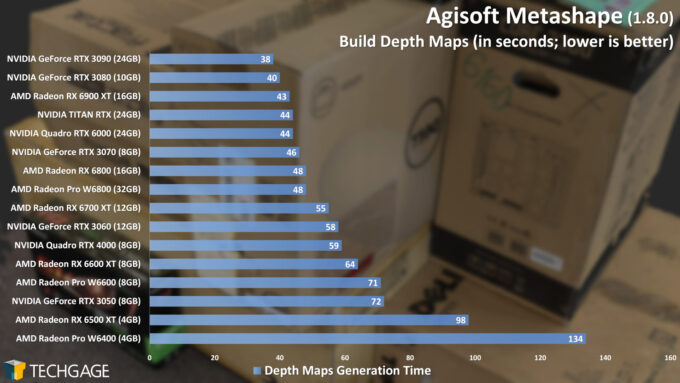 A photogrammetry process will involve both the CPU and GPU, depending on the computation being done. The Build Depth Maps process, however, focuses squarely on the GPU, allowing us to see a large separation between the bottom two GPUs, and the rest of the pack. Overall, it’s still pretty respectable performance, given the fact that we’re talking about a GPU without a power connector.