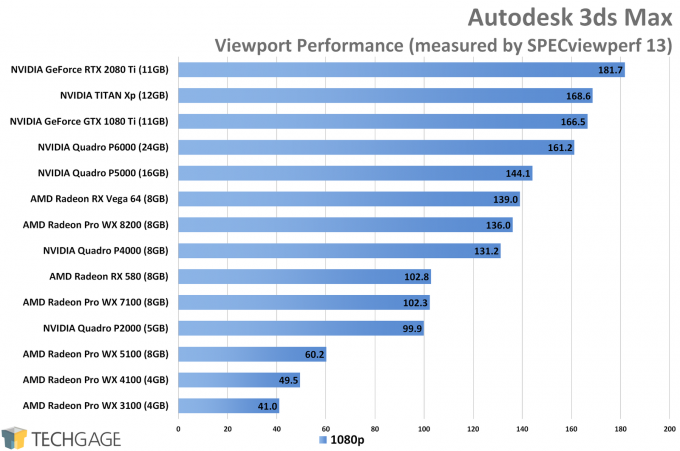 Sheer strength is the name of the game with 3ds Max. Quadros and Radeon Pros don’t seem to offer special performance optimizations at all, a good thing for those who use the suite. Note that this wouldn’t necessarily mirror performance if you were use a plugin-specific viewport, but the faster the GPU you’re equipped with, the happier you’ll be editing in Max. 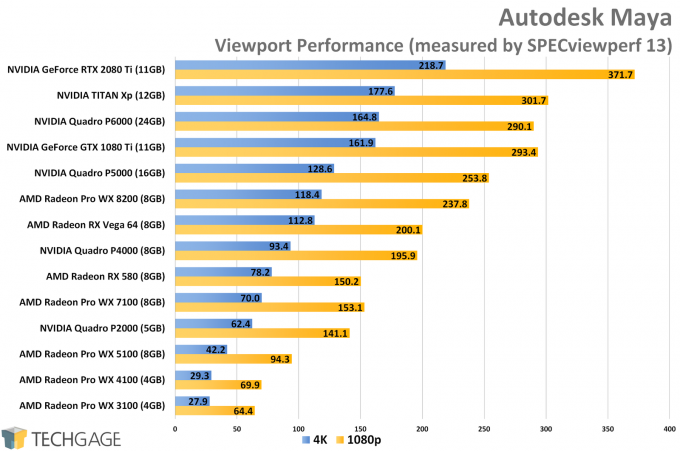 Maya shows very similar scaling to Max, except here, Radeon Pros do have specific performance optimizations. That helps the WX 8200 leap ahead of the technically faster RX Vega 64. It also places the card right behind the Quadro P5000, which is currently priced about seventy percent higher than AMD’s WX 8200 (but again, NVIDIA’s card has double the VRAM). 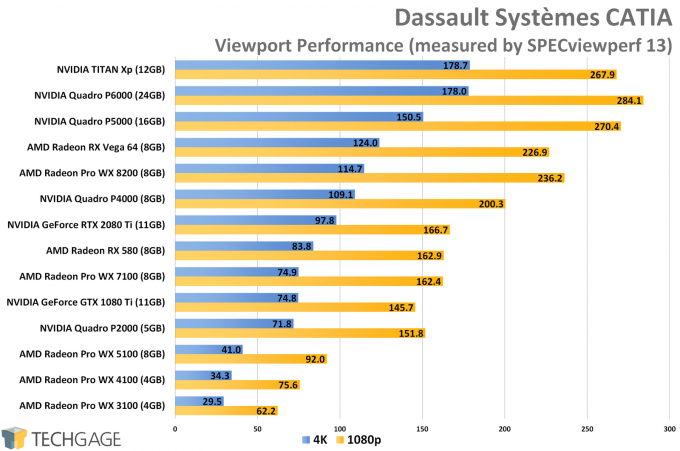 On AMD’s side, performance optimizations seem to be in place that helps push the WX 8200 to sit just ahead of the Vega 64 at 1080p, but just behind at 4K. Given this scaling, it seems likely that the WX 9100 would outperform the Vega 64, but it’d still sit behind the slightly lesser expensive Quadro P5000.

NVIDIA’s cards are a little interesting in that CATIA makes use of performance optimizations in the Quadros, but also the TITAN Xp. The GeForce cards, including the 1080 Ti and the newly released RTX 2080 Ti, both fall to the middle of the pack, behind the P4000, which is equivalent to a GTX 1060/1070. 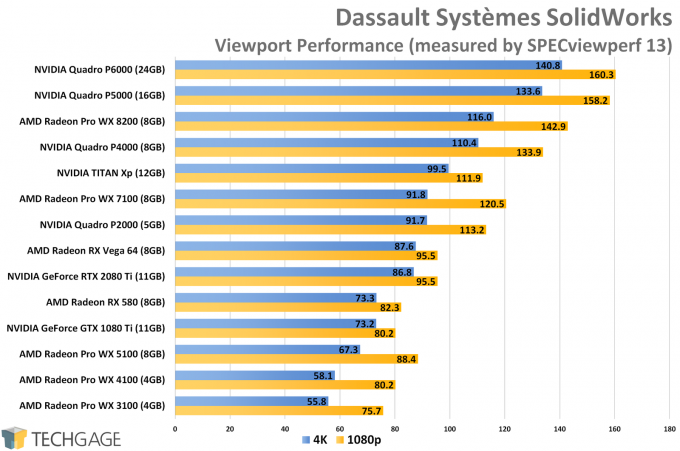 We’ve seen good performance from the WX 8200 throughout most of the tests up to this point, but its SolidWorks performance is notable. Whereas AMD delivered similar performance on both Radeon and Radeon Pro in CATIA, the professional cards are blessed with specific performance optimizations in SolidWorks. Here, the WX 8200 sits just behind the Quadro P5000, and in third place overall, and outperforming the TITAN Xp too.

NVIDIA saves the best SolidWorks performance for its Quadro cards, which means the gaming cards are simply not a great choice. Even a modest Quadro P2000 outperforms the RTX 2080 Ti. Not by much, mind you, but it still happens – and you sure wouldn’t expect it. 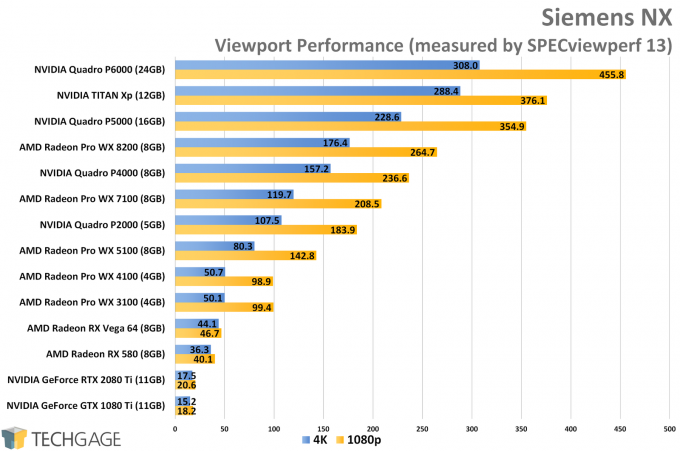 I like to say “know your workload” a lot, and it’s with applications like Siemens’ NX that makes it really important. Gaming GPUs on both sides of the fence fall to the absolute bottom, though it’s notable that the Radeons double the performance of the GeForces (look at the RX 580 with double the performance of an RTX 2080 Ti, but at such low levels, it’s largely inconsequential). You can get dramatically improved performance by opting for even the smallest Quadro or Radeon Pro in the chart over any gaming card. 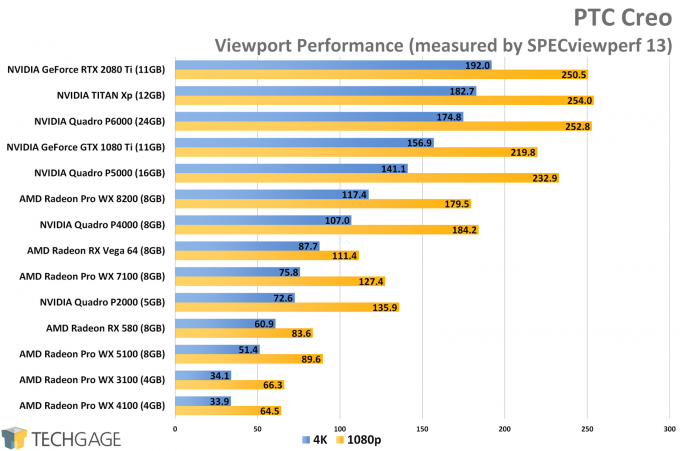 We’ve returned to a world where brute force matters more, not so much optimizations – at least where performance is concerned. That said, the RTX 2080 Ti doesn’t exactly slay the TITAN Xp as you’d expect it to, which means there could be room for growth here. The Qudros do slightly better than their gaming counterparts, but not by a huge margin.

This is another suite where the WX 8200 falls just behind the P5000, despite costing a lot less. The WX 8200 also performs a lot better than the Vega 64, again hinting at specific Radeon Pro optimizations, along with the WX 7100 ahead of the RX 580. 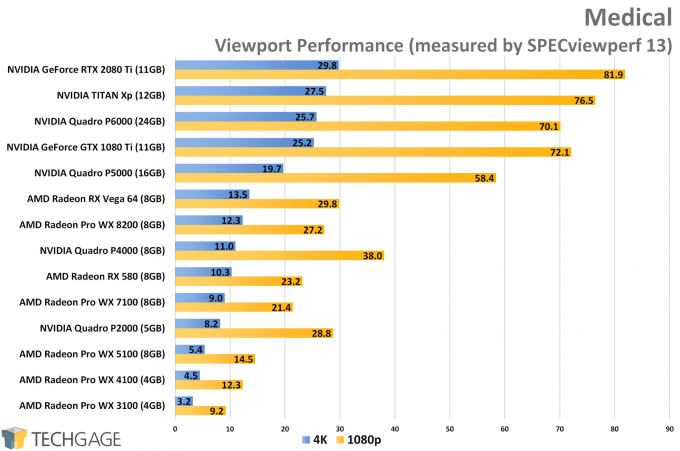 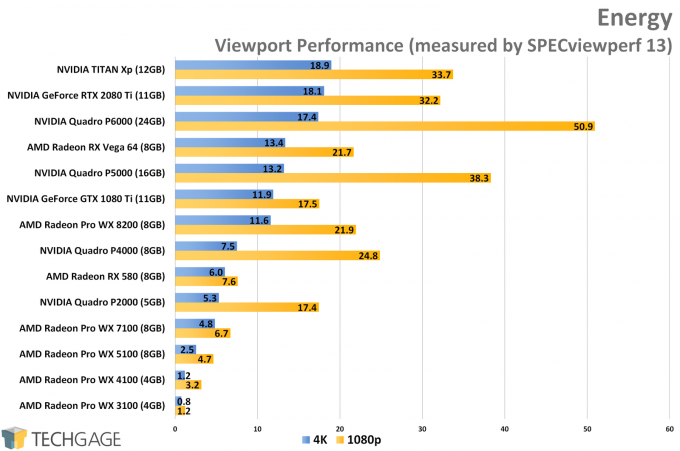 In both the medical and energy tests, the cards scale pretty much as you’d expect given their rated performance. I will say that these results only paint part of the overall picture, though. On the smaller Radeon Pros, the energy test took ages to get through in comparison to every other card. If you are involved in purchasing hardware for these industries, chances are good you know not to go with cards found closer to the bottom of the performance ladder.

That said, in both of these tests, NVIDIA outperforms AMD pretty easily overall, with 1080p performance being a lot better in the medical test – for some reason. 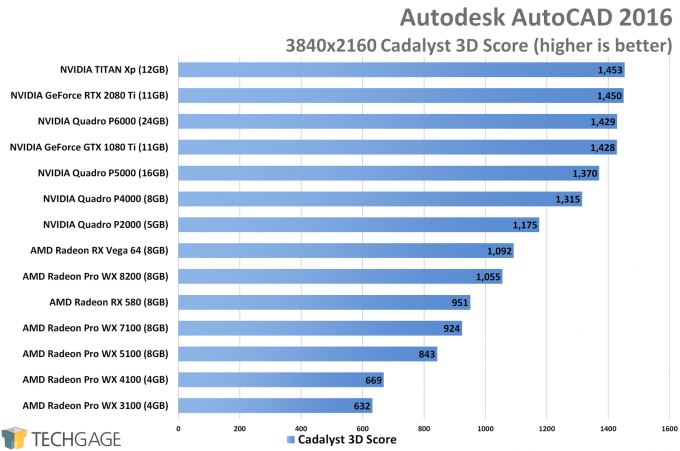 I left AutoCAD for the end as it’s the only test result here not gained through SPECviewperf. Instead, it’s tested with Cadalyst, a benchmark script that goes by the same name as the website that produced it.

Based on the results above, NVIDIA appears to offer the same AutoCAD performance optimizations on both its GeForce and Quadros, but AMD offers its own in our dreams. It’s not often we see such a clear divide between one vendor and another in a chart. For the best AutoCAD performance, you’re not likely going to be scouting out a Radeon Pro.